When it opened in January of 1933, Augusta National Golf Club was considered a gem. The Alister Mackenzie-Bobby Jones design immediately drew raves and when the first Masters Tournament was played the next year, opinion of the layout became even more favorable, or at least that’s the story we’ve been told. 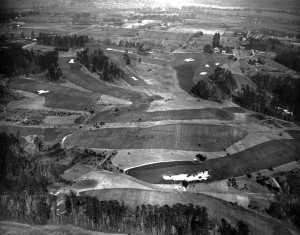 An aerial photo of Augusta National as it looked in the 1930s.

There may have been those who fawned over the design, but it was not universally loved, even within the club. By 1937, significant alterations were being made to green designs. Bunkers were moved, removed and added. A week after the ’37 Masters, Gene Sarazen lambasted the course, calling it a “weak test” in a wire service story. Sarazen was interviewed in Ashville, N.C. where he was playing in an exhibition match.

(Jones and the Chairman of ANGC, Clifford Roberts, were obviously not as overly sensitive to criticism in the early days. Sarazen was not shunned for his comments they way Jimmy Demaret was a few years later for asking Jones if he thought attendance for the tournament was down from the previous year.)

Sarazen wasn’t skewing the course because he played poorly there; quite the opposite. He won the second Masters in 1935 after a 36-hole playoff  with Craig Wood; both carded six-unders for the tournament. It was during the final round that Sarazen achieved the “shot heard round the world” when he holed a 235-yard 4-wood on the par-5 15th for  double eagle 2. He went from trailing the leaders by three shots to being tied with one swing.

“Par isn’t par anymore. Today we are playing with modern scientifically made equipment, but courses have not kept step with time,” he said from Ashville, including August in his assessment.

That year Byron Nelson won the tournament with a four-round score of 283, five-under par. Sarazen said the numbers were misleading. He claimed that par was never more than 68 for any of the rounds and that Nelson was actually 11-over for the event.

The powers of Augusta—Roberts and Jones—may have listened to the complaints of Sarazen and others. Later in 1937, P

erry Maxwell was the man they hired to oversee the modifications since Mackenzie was back in Scotland. The impetus for the changes then, as today, is about the Masters and not the members. It is the only course in world where every agronomic or architecture decision is based on how will affect four days of play.

In 1937 the 3rd, 5th, 10th were reworked, including moving the 10th green back  55 yards. The fairway bunker on 10 is the original greenside bunker and the only remaining Mackenzie-Jones sand hazard.

This website Historyshots.com, shows how little of the original Augusta survives with side-by-side, then-and-now hole drawings.

The alterations of 1937 were just the beginning. One of the oldest traditions at AGNC is that they members can’t leave the golf course alone.

Here is a partial list of architects who have worked on the design since Maxwell: Robert Trent Jones, George W. Cobb, George W. Cobb and John LaFoy, George Fazio, Joseph Finger and Byron Nelson, Jay Morrish and Bob Cupp, Jack Nicklaus and, in the last few years, Tom Fazio. The list doesn’t include chairman who have altered the golf course without official input of architects or players. To get even more of an idea of how little Augusta of 2014 resembles the one of the 1930s, click here for photos that are part of a golf video game Tiger Woods PGA Tour 14.

Through all the changes, the original intent of Mackenzie and Jones has been lost. Augusta is no longer and inland links that resembles the great seaside courses of the British Isles and presents  golfers with options for playing holes. A number of the modifications over the years have eliminated the ground game play, such as the second shot into the 17th. The placement of two bunkers in front of the green means approaches can only come from above. The addition of trees there, and on so many other holes, narrowed hole corridors and eliminated the various line of play that Mackenzie and Jones designed.

Last week I was listening to a national sports radio show and a golf analyst guest (I never heard the man’s name)  discuss possible winners for this year’s Masters. He eliminated Graeme McDowell from contention even though McDowell has been playing well this year. The reason, the analyst said, is that McDowell’s ball flight (for a right hander) is a fade and not a draw and the course does not set up for that. It is highly doubtful that that’s the way Mackenzie and Jones laid out Augusta. Most likely, the original Augusta rewarded the player who could work the golf ball left and right. Ironically, the modern Augusta would not been conducive to one of the all-time great players and three-time Masters champion, Ben Hogan, who was favorite of Jones and Roberts. There is a bridge at Augusta named in his honor. Fortunately for Hogan, a fader of the golf ball, he played the course when it allowed for a variety of ball flights. Were he competing today, Hogan might be another great player whose chances at winning the Masters are all but eliminated by the modern and improved Augusta.