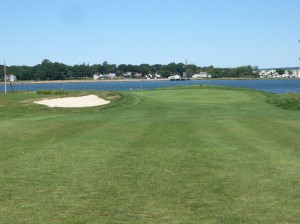 The 150-yard third hole. The intent is to significantly reduce the size of the bunker.

Chapter 7 of my book, To the Nines is titled “Fenwick: Katharine Hepburn’s Playground.” The Fenwick Golf Course has been for years one of my favorites, a gem on the Connecticut Shoreline that dates back to the late 1890s when the Borough of Fenwick was the summer home to Hartford’s CEOs and politicians.

Having first played the course in 1989, I’ve spent a lot of time surmising how I would alter the layout and now I’ll have a chance to do just that, as well as make alterations to Ryder Course, a five-hole layout used to get beginners playing the game before they head to the “big course.”

The borough is a recognized entity that has taxation powers, even though it is part of the town of Old Saybrook.  Golf Course superintendent Daryl Aresco and his crew are also responsible for trash pickup and snow plowing in the borough.

I’ve been hired to produce what we are are calling a “master plan narrative” for the nine-hole course. This will be a hole-by-hole guideline of architecture and agronomic modifications, from the addition and removal of bunkers, to the recapturing of putting surfaces, to the removal of trees. 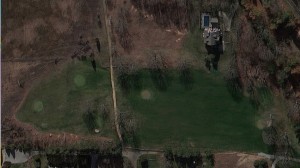 Aerial view of the Ryder Course.

The intent of the borough is to have the work done over the next three to seven years.

For the short course, the project is intended to start and finish this fall. Right now, there are five holes ranging in distance from about 40 to 70 yards. The existing greens are no more than circles mowed into the turf. My job is to expand the greens to about 1,500 square feet, raise a few and contour all of them. Some greens will also be moved. Tees will be expanded, too. I’ve also been asked to put in two small, shallow greenside bunkers for the beginners. For the more adept golfers who practice on the short course, a fairway bunker and a deeper greenside bunker will be added.