A telling exchange took place during Friday’s coverage of the U.S. Open when Tiger Woods’s second shot to the par-5 17th, landed in the narrow approach, ran across the green and off the right side, down a hill where the rough had been shaved  to collar height for the tournament, ultimately coming to rest some 30 yards from the green and 15 feet below it. Woods pitched on, missed the birdie  then sank the par effort. 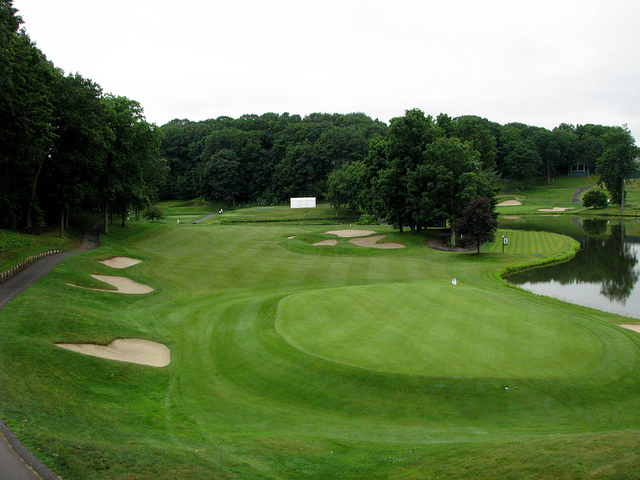 The 15th hole at TPC River Highlands, which has some of the same qualities as the Olympic Club's 17th hole and its controversial U.S. Open setup.

The television announcers then gave their opinions of the hole.

“I wasn’t a fan of it earlier in the week but I have come to accept it. I think the players know what they have to do. They know they have to bounce it in here.”

“Well. I’d offer this, Curtis, if you were playing and you hit a shot like that and it ended up there I don’t think you’d be pleased.”

To which Strange replied, “No, but I think it’s unique here at Olympic. It certainly isn’t unfair.”

Gary Koch, in a somewhat timid tone added, “It’s never been unique before.”

Strange took on the challenge admirably defending the alterations the USGA made.

“The reason I say it is the players know what’s up there. They know if they hit a hot shot into this green it’s going to end up down this way. The hole is playing short. He (Woods)  hit four- or five-iron in here.”

It’s noteworthy that Maltbie and Koch viewed the 17th and its quirkiness and somehow being bad and unfair, once again illustrating that tour golfers think the game should be equitable.

The facts prove, though, that the 17th was not unfair nor too harsh. It played the easiest of the 18 for the tournament at 4.715. (Is there really a need to take the scoring average of a hole to three decimal places?)

I think Maltbie and Koch failed in their opinion of the 17th because they view golf as needing to be fair and because they looked at it on its own and not in context of other golf holes.

At TPC River Highlands, for instance, where the Travelers Championship is being played this week, the 15th hole has some of the same qualities as Olympic’s 17th that Maltbie and Koch detest. The drivable par-4 of 296 from the back tees is the ultimate risk-reward hole. A well-struck shot can stop on the elevated green. A shot too far left is in bunker, or worse, a pond. It is on the right side, however, that the hole most resembles the 17th. Balls can run up the slope and onto the putting surface, then peel off to the right down the closely mowed banking that directs them into a bunker. The sand shot is to a green top five feet above the ball and tilts away from the play towards the bunker on the far side. A bladed effort can reach the pond. A four from the right bunker is a victory. Five is acceptable. It’s doubtful that any announcer would call River Highland’s 15th unfair, nor should they.