The clothes make the man, and apparently, grounds for a serious disagreement.

An accusation  at Weston (Mass.) Country Club over alleged dress code violations led to the suspension of 10 members and the resignation of the club president, according to a Boston Globe story. 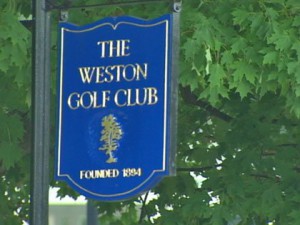 The incident happened in September when the club president accused members  and non-members, some of whom were drinking in the club bar, of wearing denim, which is forbidden by club policy.

The private club, which has a $45,000 initiation fee, according to the Globe, is located about 15 miles west of Boston.

According to the Globe, “The resulting verbal altercation was so intense police were called to defuse the situation.”

The Globe quoted the police report of officer Joseph Kozowyk: “When I arrived, I observed two men… engaged in a loud, verbal argument. Neither man had any signs of a physical altercation.”

It is alleged that club president Tom Ferry used “profane language” when informing two guests, a married couple, that they were not allowed to wear denim on the property. The two denied they violated the club rules.

According to the Globe, Ferry issued “a contrite statement.”

It reads in part, “Most importantly I wish to repeat publicly the apology I gave to the people with whom I interacted outside of the club that night. It was wrong of me to have spoken that way, I have no excuse, and sincerely regret having done so.”