Rumors in the Massachusetts golf community that the esteemed Whitinsville (Mass.) Golf Club has filed for bankruptcy are untrue according to general manager and head golf professional Chris Hulme, who I spoke with by phone. 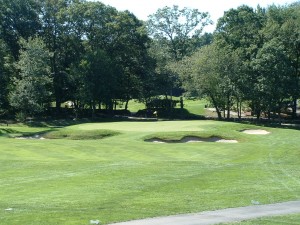 “We have not done anything to that end,” Hulme said while admitting the private club, like many others in the country, is going through tough financial times.

In my book, “To the Nines,” (autographed copies are available by contacting me directly and make a lovely holiday gift) I wrote that the 1925 Donald Ross design, “displays shades and hues reminiscent of other New England Ross standouts such as Rhode Island Country Club and Essex (Mass.) County Club.”

The ninth hole, with the Mumford River on the right, is one of the finest par-4s in the country, at least according to Ben Crenshaw.

Hulme said the club lost members when the nearby 18-hole Pleasant Valley Country Club dropped prices after a new owner took over. Also working against Whitinsville is the fact that it is solely a golf facility. There is no deck attached to the clubhouse and the kitchen has limited hours. From a golf standpoint, however, Whitinsville stands well above Pleasant Valley and all other courses in the immediate area.

Chris remains optimistic said the club is being creative in ways to attract new members for 2012. Longtime superintendent Dave Johnston has the course in great shape, as always, and the club has no plans to severely reduce his maintenance budget.

“That’s our product,” Hulme said of the golf course.