A few weeks ago when I heard the name Treetops Resort there was some recognition but I couldn’t put my finger on why.  I did some Internet searching and discovered that Treetops hosted the Par-3 Shootout, broadcast by ESPN, from 1999 to 2006. The event featured the likes of Phil Mickelson, Freddy Couples, Jack Nicklaus and Lee Trevino, who in 2001 made a million-dollar hole-in-one. The format pitted two players each from the PGA Tour and Champions Tour in a skins game. It was golf teaching guru Rick Smith who was headquartered at Treetops  that orchestrated the event. Smith is the  designer of the nine-hole, par-3 Threetops course that opened in 1992, and two other 18-hole designs there, as well. 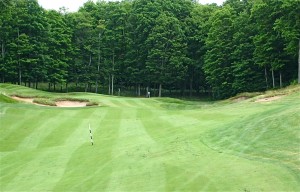 Treetops is a five-course facility located in Gaylor, Mich., about a 70-mile drive north from the Traverse City airport.

It has a laid back atmosphere that is geared more towards adults than to children. The rooms are comfortable and the staff friendly and attentive without being overbearing. The food is solid. Ken, a bartender in The Sports Bar (might I suggest a new name for the venue), is the man you want to befriend for an expertly guided tour of an array of Michigan microbrews in bottle and on draft. There is also a pool and tennis courts on the property as well as two driving ranges and practice facilities. Within a short drive are activities such as  fly fishing and elk watching. I was lucky enough to be there for the annual Alpenfest in  Gaylord.

The most famous of the five golf courses at Treetops is Threetops . The nine holes each have three tees and vary in distance from under 100 yards to close to just over 210 yards. It is a blast to play. Unfortunately, it cannot be walked.

As for the four 18-hole layouts, in general three are fun although I was sick of severe downhill par-3s that featured long views of the Michigan landscape by the time I was finished. The conditioning from course to course is impressively consistent. Fairway and greens are firm enough to allow for the ground game. The rough is penal but not overdone.

Here are the four 18-hole golf courses ranked from my favorite down.

Premier, architect Tom Fazio, 1992: A design that has an abundant amount of strategy and interesting greens, not traits I necessarily associate with Fazio’s work. A number of holes call for thought off the tee and give the player the option of hitting something other than driver.

Here Fazio, or who ever was the lead designer, allows for the ground game from the get go. A wonderful kick slope on the left side of the downhill first hole directs shots onto the green if played correctly.

One of my favorites is the dogleg right par-5 sixth hole that I played from 462 yards. The hole begs for players to challenge a bunker on the inside of the turn, which I did unsuccessfully. When I went to play my second shot out of the sand I discovered thought was required there as well as I found myself staring at another bunker on the far side of the fairway right where I was aimed.

There is a good blend of par-3s, par-4s and par-5s. It’s too bad this is not a layout that can be walked because of the distances from greens to tees.

The only knock is that like the majority of Fazio designs the layout is built down into the land and not placed on top of it. With thousands of cubic yards of earth moved to create the hole, at times it feels forced.

Traditions, architect Rick Smith, 1997: The only layout of the five that can be walked, the Traditions is supposed to be, it appears, Smith’s attempt at a links course. He succeeds in some aspects and fails in others.  It opened four years after Smith’s first-ever 18-hole layout, Treetops’ Signature course.

Traditions is minimal in design and rests comfortably on the land making it easily walkable, although it is a 20-minute golf cart ride to get to the first tee from the main clubhouse that also services the Signature, Premier and Threetops courses.

The routing easily flows from the green to the tee although when using a cart finding your way around is a bit confusing since there are no paths on many of the holes.

I was baffled at points by Smith’s design strategy. Take the seventh hole, a dogleg left that I played at 309 yards. From the tee it appears as if challenging the bunker on the inside of the turn would yield the best line in on the second shot, a common strategy; it does not. The angle of the putting surface favors those who hit their tee balls to the outside of the fairway well away from trouble. In fact, the scorecard reads, “Don’t test the left side as there is a lot of room to the right.” I’m not sure as to why the bunker is situated in a way to give golfers the idea it is to be reckoned with.

This is followed by the eighth hole, another short four, that I played at 313 yards. Here a bunker off the tee beckons you to drive over it intimating that there is safety on the other side. Again, Smith broke with convention and rewards the player who hits away from trouble by giving them opening to the putting surface.

There are, however, a number of delightful holes and the layout concludes with well-conceived par-5.

What is odd about the par-70 course is that the longest it plays is 6,357 yards and has a rating of 70 and a slope of 130. Long hitters can easily overpower it.

If I were to return to Treetops, this is the first course I would play after a day of flying and an hour-plus van ride to the property. This is also the best course on site for shorter hitters and higher handicaps.

Signature, architect Rick Smith, 1993: A favorite of many on the Treetops staff and guests, I found Smith’s debut golf 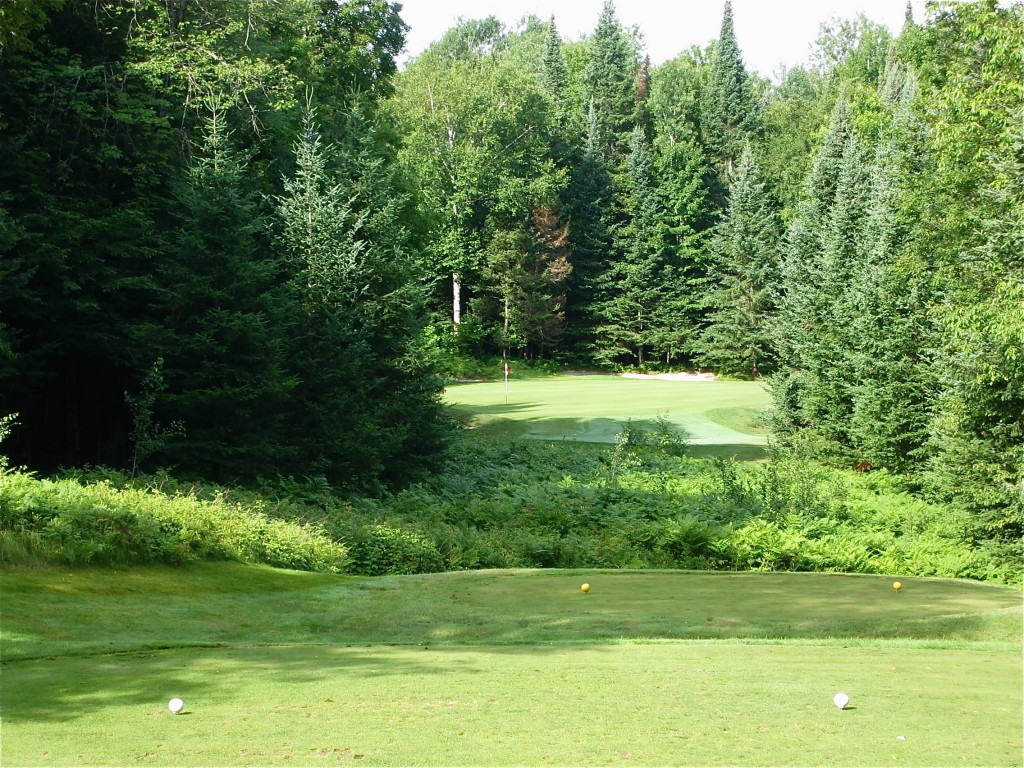 course to be modestly enjoyable and at times, extremely frustrating. While some holes allow for the bump-and-run and reward play to the favored sides of fairways, many require forced carries to the green with severe penalties for failure, a trait right out of Robert Trent Jones’s playbook.

While numerous holes feature wide fairways that allow players to easily locate slightly errant drives, a good concept for a golf resort, the undulating greens would better suit a private club. Some are so severe it would take a minimum of 20 rounds to get a good handle on how to putt them and where to best place approach shots depending on the location of the flagstick.

At times, the greens border on ludicrous as with the ninth hole that I played at 411 yards. After a good drive and a chunked second shot, my 40-yard pitch to the front hole location trickled past the flag stick and then down a three-foot high slope, coming to rest some 50 feet away nearly on the back fringe; quite the lashing for a minor transgression.

My notes for the par-3 11th read, “narrowest downhill par-3 ever.” I played it at 175 yards and the trees encroach so tightly on the route from tee to green that a view of the outside edges of the putting surface are obscured. My tee ball that missed right vanished before it hit the ground, making me think it was deep in the flora. I found it had come to rest in a greenside bunker not even visible from where I hit.

While I thought parts of the course fun, (I really like the long par-4 third with a green that runs away from the line of play and has a large chipping area beyond) I was disappointed enough after playing the Signature from the black tees (6,653, 72.6, 136) that I thought maybe I missed something. I went back out in the afternoon and played the first 13 holes from the blue tees (6,285, 71.1, 133) but still wasn’t impressed. I’m clearly in the minority, as most people I chatted with who played it liked it. The distance from greens to tees prevents this course from being walkable.

Masterpiece, architect Robert Trent Jones, 1987: It could only be the late Robert Trent Jones and his world-class ego that permit the name of one of his courses to be  “Masterpiece” and proceed to produce a design that doesn’t even come close to standing out from his other golf courses of that period. If you dislike Jones’s work then you’ll find plenty to despise. If you love RTJ’s formulaic approach that eliminates the ground game, levels a heavy penalty on missed approach shots and shows no mercy to those who can’t stop and iron on a dime then, baby, this is heaven.

Take the second hole, which I played from 181 yards into a slight breeze. The uphill tee shot is over a ravine. A strip bunker in front runs across almost the width of the green obscuring the putting surface, there is a bunker left, a rough covered rising slope behind and to the right a sharp drop off into the trees. Sounds like fun, doesn’t it? 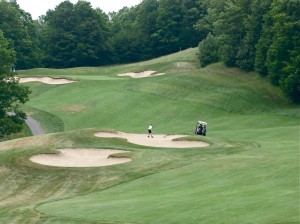 The 11th hole of the Masterpiece course at Treetops Resort, designed by Robert Trent Jones, seems to beckon golfers to play over the bunker but the smart route is to the far right fairway. (Photo by Anthony Pioppi)

The 10th is straight up hill at 589 yards from the blue tees (6,377 yards, 71.4, 138) but plays much longer. In true Robert Trent Jones style, it concludes with a tiny green not visible from the desired second landing area. If you haven’t hit two good shots to start there is virtually no chance of holding the putting surface with a long club on the approach.

This doozy is backed up by the 11th, a downhill par-4 I played at 425 yards. On the inside of the dogleg left, perched on a knob, are two large bunkers with the fairway wrapping around them. The play appears to call for a tee ball that flirts with danger. What I discovered is that a drive that lands in the fairway but far right of the trouble rolls down the steep slope into the ideal location behind the bunkers; so much for strategy. The second shot­—this should come as no surprise to seasoned Jones veterans—is straight up hill to green with trouble all around.

Large gaps between greens and tees makes this course unwalkable, as well.

When Treetops opened, Jones was the most sought-after architect in the world so resort founder Harry Melling (who passed away suddenly in 1999) cannot be faulted for hiring him. Every golf course built at Treetops after what Jones left behind is better than what Jones produced. If Treetops ever sees fit to add more golf (the story goes that Melling’s goal was “a golf course for every day of the week”), then lets hope the trend continues.