In the past year a pair of courses with similar names underwent significant reworking. The results for both are unqualified successes.

At Meadowbrook Country Club in Northville, Mich. architect Andy Staples completely reinvented a layout with a convoluted design history that may have began with either six or nine holes designed by Willie Park Jr.

In Jericho, N.Y. designer Brian Silva altered the Meadow Brook Club course, originally a Dick Wilson layout that was reconfigured in the 1970s when the club sold off land on which a number of  holes were located and Joe Finger was brought in to design the new ones. 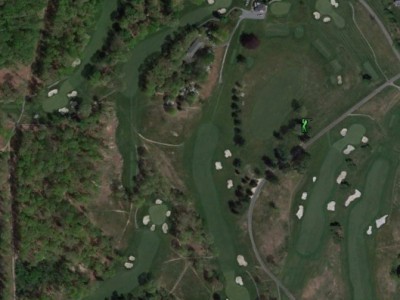 An aerial view of a portion of the Meadow Brook Club in Jericho, N.Y. following the Brian Silva renovation.

Meadow Brook, the former site of a Champions PGA Tour event, could be a bear of a course. Wilson was not known for what could be termed “friendly” designs. He often forced players to fly the ball into greens. If there were openings to run a shot, they were narrow at best.

His work at Meadow Brook included sharp doglegs—90 degrees at one point—that required all but the small group of players who could hit hard draws or fades off the tee, to play long approach shots. Silva softened some of the bends and in a number of cases added strategy. The Wilson-Finger fairway bunkers were almost exclusively the penal type, located in the rough and positioned to only snag mistakes. Silva repositioned the sand hazards on a number of holes creating a bite-off element, carry or successfully challenge the trouble and the best line on the ensuing shot is to be had. It is a style commonly found on all of Silva’s original designs and at Meadow Brook the changes enhance the layout.

The first hole is a perfect example of the modifications. Wilson placed three bunkers  into a hill on the inside of the dogleg left that were only found by errant drives. Using the same land form in which they were located, Silva merely moved the sand pits closer to the fairway. Now, cutting the corner and, therefore, carrying one or more of the bunkers, is the optimal line off the tee. There is plenty of room to play away from the trouble but the result is a longer distance to the green.

On the fifth hole, a quirky short par-4 Wilson original that abounds in strategy, Silva opened an entrance to the driveable green which in turn entices players to go for the putting surface off the tee. The bold play requires a tee shot that skirts trees down the left side and which also carries a huge bunker-pocked hill. The conservative path is to the right but that leaves a tricky pitch to a small putting surface ringed with bunkers.

The sum total of a Silva’s work at Meadow Brook is that an already strong design now presents more challenges and fun.

Meanwhile in Northfield, Mich. Staples reinvented Meadowbrook Country Club, which dates back to the early 1900s. The club hosted the inaugural Motor City Open, won by Ben Hogan, as well as three other playings of the event. The 1955 PGA Championship, then a match play contest, was won by Doug Ford.

The original course at Meadowbrook was the work of Willie Park, Jr. with the second nine laid out by the team of Harry Collis and Jack Darey in the 1920s. In 1933 Donald Ross reworked two holes. Arthur Hills did the same to three others more than 50 years later.

Over the ensuing decades, Northfield over-planted trees to the point that lines of play were choked off and the turf suffered from lack of sun and air. Staples’s charge was to essentially create an entirely new design using most of the existing foot print. He and the members opted to create a layout based on some of Park’s other courses. They visited his designs in the region as well as traveling to England to see the legendary Huntercombe Golf Club and the two courses at Sunningdale Golf Club. 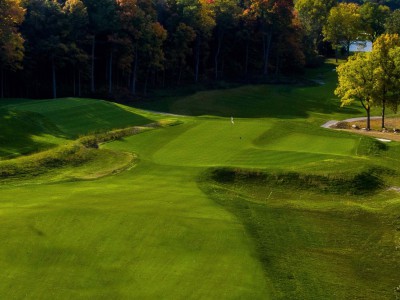 At Meadowbrook, the most audacious of the greens is a take on Huntercombe’s fourth, a short par-4 that ends at an a reverse L-shaped green, with the right hand portion is more than two feet below the other level of the putting surface. Where at Huntercomb  the original the inside of the “L” is a grass bunker, at Meadowbrook it is mowed at collar height creating a more forgiving result for misses on that side.

Nearly all the greens have at least portions of bold movement in them, Staples adhering to one of Park’s rules for constructing a fine golf course, “If it can be avoided, putting greens should not be laid out on a plain uninteresting piece of ground.”

Staples’s second most adventurous foray at Meadowbrook was to put a Biarritz green at the end of a shorter par-5, which measures 522 yards from the back tees.

The Biarritz concept was developed by Charles Blair Macdonald and utilized on nearly every course of his work, as well as on the designs of those who followed directly in his footsteps, first Seth Raynor and second Charles Banks. On over a combined 100 designs, every Biarritz green designed by the triumvirate came at the end of a long par-3 ending at  a huge green complex with two tiers bisected by a deep swale that ran perpendicular to the line of play. Originally, on all the greens the plateau nearest the tee and the swale were mowed at fairway or approach height, with the entire back portion, which is usually around 10,000 square feet, maintained as green. Most of courses that still have a Biarritz have converted their front level and saddle to a putting surface, as well. 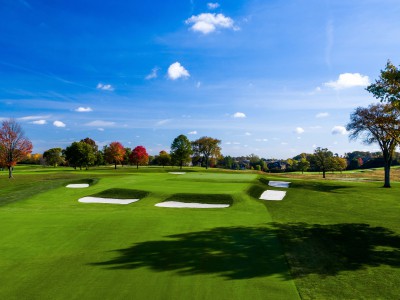 At Meadowbrook, the green proper is just the back plateau. It is an audacious move on Staples part to put a Biarritz at the end of a par-5, but while the move does not fail, it only works for a small group of players, those going for the green with a longer club. The intent of the Biarritz design is for the tee shot to land short of the green, run through the swale and up onto the putting surface. For golfers who negotiate the 17th at Meadowbrook as a three shots hole—the majority of players—the architecture will not be used as intended since the green will be approached with a lofted club.

In all, though, Staples created a design that has already garnered the club well-deserved accolades.