Kyle Bilodeau, a local PGA club pro, had been here before, inside the ropes at the Travelers Championship, teeing it up in the PGA Tour event. This time, he wanted more than to just participate, he wanted to make the cut at TPC River Highlands.

After rounds of 76-80, +16 his goal was out of reach, as it is for some many club pros and journeyman who came before Bilodeau in this and nearly every other PGA Tour tournament. He ended up in last, alone in 155th place. In 2013 he missed the cut after a pair of 77s. Since 1969 three Connecticut pros have made the cut at the Travelers, the last in 1995. 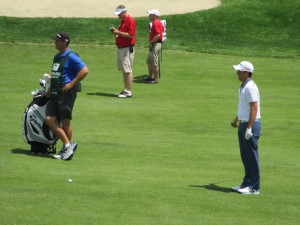 Kyle Bilodeau looks over his approach shot on the 18th hole Friday during the Travelers Championship. (Photo Anthony Pioppi)

“I know what I’ve got to do to get better, more strength training,” Bilodeau said shortly after his second round had ended, he had turned in his scorecard and talked with family and friends.

Bilodeau earned the Connecticut Section PGA spot in the Travelers  by winning the Spring PGA Stroke Play in May.

Bilodeau has tasted much success in the section, winning tournaments and cashing checks on a regular basis.

“I hit it 25 years farther than most PGA Professionals. I come out here and I get outdriven by 30 yards,” Bilodeau said..

In the second round on the dogleg right 406-yard 9th hole, Bilodeau hit a 254-yard drive to the left fairway leaving 141 yards to the hole. In the first round, Bubba Watson did the unthinkable and cut the corner of the ninth taking his tee ball over the out of bounds and the back yards of homes that lined the hole. The shot travelled a total of 354 yards coming to rest in the collection area to the left of the green, about 40 feet from the pin. He chipped and putted for a birdie

Bilodeau’s flat stick performance was a different story on Thursday when he had only 27 putts, putting him among the tournament leaders.

“I can putt with anyone on the planet,” he said.

Friday was a different story as he recorded 35 putts.

A Taylor Made staff player, Bilodeau was looked after by company reps during the week which included practice rounds at River Highlands.

He said he has no intentions of trying to Monday qualify for other PGA Tour events in the region, comfortable in his role as a club professional

“I have a great job at Ellington Ridge (Country Club) and a great set of members,” he said. “I got to do what 99.9 percent of people don’t get to do, play in a PGA Tour event and I’ve now played in two.”

Bilodeau is on the road today traveling to the Philadelphia Cricket Club for the  48th PGA Professional National Championship where he will compete against 311 other of his brethren Sunday and Monday.