Keney, one of the two layouts owned the city of Hartford, Conn., first opened in 1927. After years of neglect the city may the decision to invest a substantial amount of money in the course as well as it’s sister layout, Goodwin Park Golf Course. 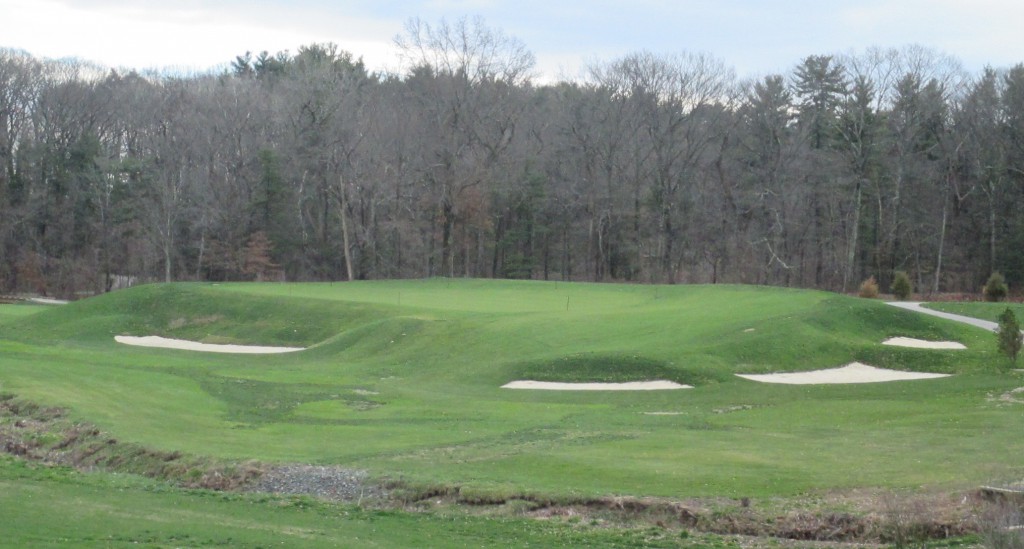 The 13th green at Keney Park. All the bunkers were added during the renovation. (Photo Anthony Pioppi)

The original design Keney was a wonderful golf layout but if it had two flaws: placid putting surfaces and a lack of visual interest.

Matthew Dusenberry, principal of Dusenberry Golf Course Design the golf course architect for the project, along with Golfweek architecture editor Brad Klein acting as consultant, seem to have remedied that, scattering sand hazards throughout the 18 holes while adding ridges or saddles to most of the greens.

In no uncertain terms, though, from a playability standpoint I’m baffled by what has transpired at Keney.

The layout is a mishmash of design styles that never meld and seem to endlessly punish the poorest shots. Bunkering vacillates from large sandy areas with grass knobs that remind of Rees Jones, to Church Pew bunkers, an apparent nod to Henry Fownes and his only design Oakmont Country Club. There is also an oddly placed Principal’s Nose bunker that’s more Ralph Barton than his mentor, Seth Raynor.

The plethora of small, rectangular greenside bunkers could be an ode to Pete Dye, but their placement is as mystifying as our most of the mounds that were added in front of greens, the hillocks seemingly positioned to affect the less adept player who runs the ball onto the putting surface. Those skilled enough to fly the humps will only encounter them as they walk onto and off the putting surfaces.

“You’re asking me to explain the unexplainable,” my well-travelled playing companion, answered me after a long line of exasperated questions that I peppered him with in regards to the bunkers, moguls and silicone-like features as we played. (He shot even par from the back tees setting the course record of the redone layout.)

Keney opened in June, a year later than originally targeted, with a hefty price tag of $10 million, way over projections. The cost for the renovation, including irrigation system, repairing of the dilapidated clubhouse, erecting of a cart barn and building of a driving range was supposed to be $5 million. Another $5 million was supposed to be sunk into the Goodwin Park course, that is in dire need of upgrading. That plan, though, has gone by the wayside, a rude dismissal of Goodwin and its regular golfers.

How a city in financial straits can rationalize $10 million on a renovation is confounding.

Keney’s front nine was designed by noted architect Devereux Emmet and was ready for play in 1927. Four years later the back nine was welcoming golfers, with local architect Robert “Jack” Ross (no relation to Donald Ross) laying out the holes. Ross also made alterations to the front nine, including the addition of the only greenside bunker, and may have been responsible for reversing the direction of one hole. While the course is being touted as an Emmet, it is much more Jack Ross.

Emmet chose the best parcel of land for his holes and provided strategy through the use of natural topography, angles and options, but his design had only two hazards, a pair of natural sandy waste areas.

Prior to construction, I gave Dusenberry a guided tour of Indian Hill Country Club, Ross’s finest surviving golf course that has a number of interesting and challenging holes. He also had access to aerial photography from the 1930s of Ross’s work at Keney and his fine designs including Golf Club of Avon and Middletown Golf Club. Dusenberry also toured some of Emmet’s work.

At Keney, Dusenberry littered the course with small bunkers. Included is a perplexing tiny fairway bunker on the right side of the 14th hole that appears to almost be a mistake. It was as if a utility vehicle full of sand traps was driving along, hit a bump, a bunker fell out, and it was decided to leave it there.

For the most part, the sand hazards are eye-catching, and that’s good, but those pretty pits will also serve to snare the worst shots and frustrate the least-adept players, including beginners. That’s not good.

For example, there is the 13th hole (photo above). The uphill par-3, with some Redan-like qualities including a lovely kick slope, plays from 135 yards to 188 yards on the card. The shorter tees actually present more difficulty since from there the green sits well above the player, while from the back tees it is nearly a level shot.

Before the renovation, any golf ball that was skulled along the ground, or hit the wall of the green complex and rolled back down, came to rest in rough some 12 feet below the putting surface. Now, with the addition of bunkers, those miscues find sand, meaning an extremely difficult bunker shot even for an adept player.

“What’s the point?” was the assessment of the new traps from a fellow player.

From the 14th tee we watched as the entire foursome come up short of the 13th green with at least one in a front bunker. Those not skilled enough to get a 135-yard tee shot to the green have little chance of extricating themselves in one shot from any of the new hazards and onto the green.

Then there is the 17th hole.

The Principal’s Nose Bunker in front of that green is mystifying in its placement. Find yourself in the front sandy areas and escape calls for throwing a shot nearly six feet straight up in the air or playing out sideway. Good luck with that and enjoy your round.

Had the bunker been set back 40 yards from the green, as Raynor, Charles Blair Macdonald or Charles Banks might have done, it would have added to the hole, now it only detracts from the fun two-level green.

Then there are the maintenance questions surrounding the grass islands found in some of the bunkers. They all require handwork to maintain and for a municipal layout with over 90 years of poor maintenance history, the features hardly seem to be a logical. Corner cutting already appears to be underway. The day we played the course every other mound in the Church Pew bunker was mowed to rough height while the remaining ones had grass nearly three feet high.

“I want to know what those bunkers look like in three to five years,” one prominent Central Connecticut superintendent’s responded when I asked his opinion of Keney.

On the greens, ridges, mounds and tiers are fun to play, but serve to render much of the putting surfaces unpinnable. On the sixth, for example, we estimated at least a third of the green can’t accommodate hole locations, even with moderate green speeds. If play or green speeds at Keney ever picks up, wear issues are on the agenda.

The problem on the sixth is a mound that was forced into the front opening of the putting surface, the effect being the green now reminds of a beautiful woman who had an unneeded boob job. As a result the green, like the woman, are far less alluring than before the change.

The mound also creates a ridiculously difficult run-up for those who come up short on the hole that can play as little as 125 yards. This is, however, a municipal course where it is hoped many people come to learn the game. If that is so then many golfers will invariably miss the target short and be frustrated in an attempt to get the golf ball close to the hole on the next try.

I’ll be in the minority with my opinion of Keney. The national media will embrace and fawn over it wholeheartedly. It has already garnered one award for restoration of the year and I’ll bet the clubhouse, the maintenance barn and the back nine it wracks up many more.

Glowing reviews in magazines should not have been the goal of the Keney renovation, getting golfers to Keney to learn and love the game on a redone course that allows them to embrace the pastime with their nascent skills should have been the intent, and it should not have cost $10 million.

One Response to “A Baffling Renovation of Keney Park”