In two consecutive weeks this summer, the No. 2 Course at the Pinehurst resort will host the U.S. Open and U.S. Women’s Open, the first time a venue has done it in the same year, never mind in back-to-back weeks. 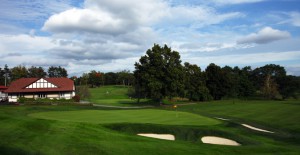 Pinehurst, however, is not the first course to host both opens on the same layout. That honor belongs to Worcester (Mass.) Country Club that welcomed the men in 1925 and the women in 1960. Willie Macfarlane won in ’25 and Betsy Rawls 35 years later. Pinehurst No. 2 and Worcester were designed by Donald Ross 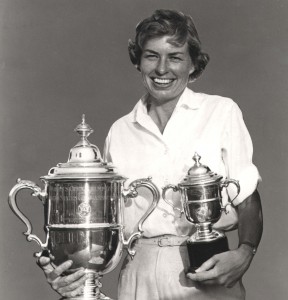 In 1925,  Macfarlane and Bobby Jones were tied after 72 holes with Macfarlane shooting a then-record 67 in the second round. They were still even after an 18-hole playoff so they went back for another 18. Macfarlane triumphed by one shot, notching a 72.

One of the most famous incidents in golf occurred during the tournament.

In the first round, Jones was about to play a shot out of the deep rough near the 11th green when he brushed the grass with his club and the golf ball moved. He told his playing partner Walter Hagen and the USGA official monitoring the match that he was calling a penalty on himself because his actions caused the movement even though no one else saw it. Jones was lauded by sportswriters and the public for his honesty to which he is supposed to have replied, “You might as well praise me for not robbing banks.”

Rawls’ victory made her the first to earn four Women’s Open triumphs. It was also her last U.S. Open title. Only Mickey Wright has duplicated the feat. 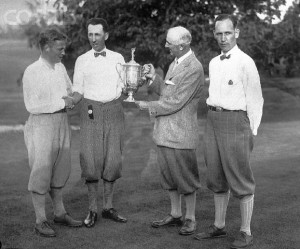 Baltusrol Golf Club in New Jersey is the only facility to host both events on two layouts. The Lower Course and Upper Course have each seen the men and women vie for the national championship. The men also played on two other designs there that are no longer existent.

The first city to host both championships was Philadelphia when in 1957 Bala Golf Club was host site of the U.S. Women’s Open. By that time the men’s open had been held eight times in the city, the first time 1907 at Philadelphia Cricket Club.

The course that has hosted the most combined events is Oakmont Country Club. The venerable Pennsylvania layout designed by Henry Fownes has welcomed eight U.S. Opens and two U.S. Women’s Opens.

Other clubs that have had both tournaments are Hazeltine National Golf Club (2 each, men’s and women’s), Cherry Hills Country Club (3 men’s, 1 women’s) with Newport Country Club, Colonial Country Club and Interlachen Country Club hosting one each.

Like Winged Foot, Baltimore Country Club and Atlanta Athletic Club have also been the host venues for both events but they were played on different courses.