Fans and pro golfers will get their first look at the renovated  TPC River Highlands during this week’s Travelers Championship PGA Tour event. 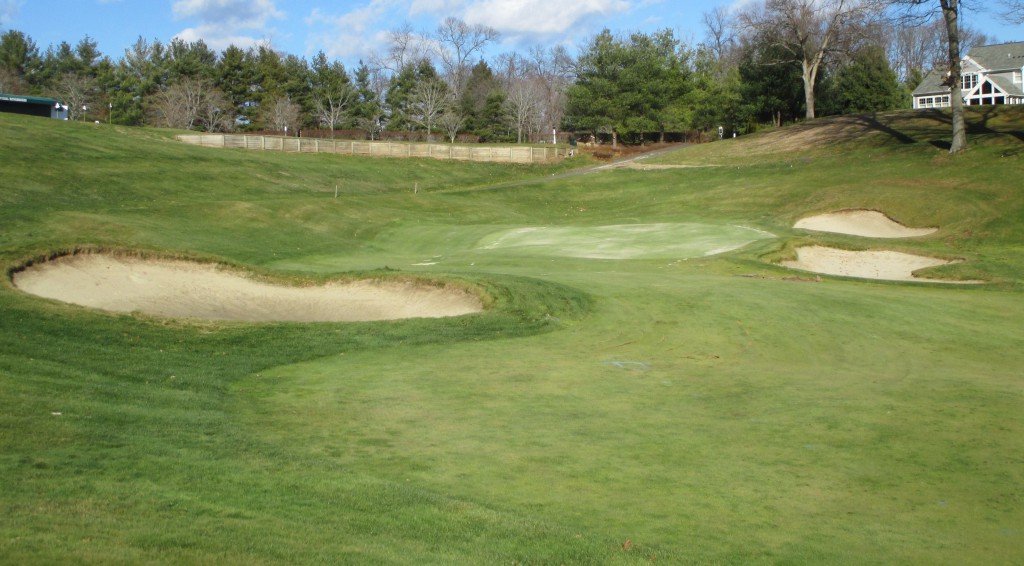 Bunkers before renovation on the 18th hole of TPC River Highlands.

The bunker renovation was performed by PGA Tour Design and Construction Services. The flashed sand bunkers of the 1989 Bobby Weed redesign were converted to a more subtle  grass-faced design. The strategy of the bunkering is essential unchanged although, a new well-placed fairway bunker on the par-5 sixth hole makes the second shot more of a risk-reward effort now for the average play. It will be interesting to see if it affects the Tour pros.

Greens on holes 13, 15-17 were softened to create more hole locations. The 10th green was rebuilt in order to repair a collapsed drainage line. The back tee of the drivable par-15 was rebuilt as was the fan viewing area behind the 16th green. On the 12th hole, the cart path was repositioned.

According to Moore, about 100,000 square feet of sand was removed, almost all of it in areas where players rarely their their golf ball.

Trees along the right side of the 10th hole were removed to give the always-saturated fairway more light and air.

An irritating weeping willow was taken out on the right side of the 13 fairway—thank God—but two others need to go, one along the pond and one behind the 12th green, both of which block views of the winding fairway.

Longtime River Highlands superintendent Tom Degrandi was in place when the project began in the fall of 2015. Jeff Reich, who took over this spring after Degrandi retired, finished the renovation. This year’s Travelers Championship will be his first PGA Tour event as a superintendent.

The original golf course on the site of what is now River Highlands was Middletown Golf Club and opened in 1928. It was designed by  Robert “Jack” Ross and Maurice Kearney. It’s name was soon changed to Edgewood Golf Club. In the late 1980s the Tour purchased the property naming it TPC Connecticut and the course underwent a significant renovation at the hands of architect Pete Dye. In 1989 TPC River Highlands (spelled for a short time as Riverhighlands) opened after a significant renovation by Weed, who had worked for Dye, with Tour Players Roger Maltbie and Howard Twitty acting as consultants. Additional land was purchased where holes 10-13 and some of 14 are now located.

(All photos by Anthony Pioppi)