The construction of a golf course built for one on the island of Jura in the Inner Hebrides of Scotland is underway and photos show a visually astounding layout that by all accounts will play just as impressively. 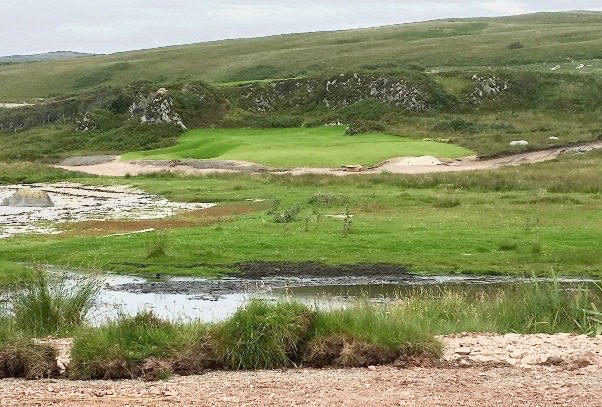 The par-3 12th hole of the Jura golf course that is under construction.

Australian financier Greg Coffey announced his intention to build the 18-hole course for his own private enjoyment after buying the 14,000 Ardfin Estate in autumn 2012. It will not be open to the public or have members other than Coffey.  The year-round population of Jura is about 190.

Coffee, formerly a hedge fund manager worth reportedly about $740 million in 2011, retired at the age of 41, the year he bought Ardfin.

The course will have no clubhouse and, according to a press release at the time of the announcement, it will be routed in two loops “with spectacular sea views and an emphasis on a design that would cause minimal disturbance to the coastal landscape. Mr. Harrison had aimed to preserve the burns and large areas of particularly sensitive land, such as wetlands.

“The development team plan to use grasses that resemble the current pasture grasses used for farming and, like traditional old Scottish courses, to have no irrigation, even on the greens – also the case at the nearby Machrie.”

The Machrie Golf Links is located on the island of Islay.

Bob Harrison, a longtime lead architect for Greg Norman’s company and now on his own, is the designer.

“I love Scotland in general and, by a pleasant coincidence, had been a devoted fan of the Machrie Golf Course on nearby Islay for many years. Jura has become my favourite place on earth,” Harrison was quoted as saying in the release. 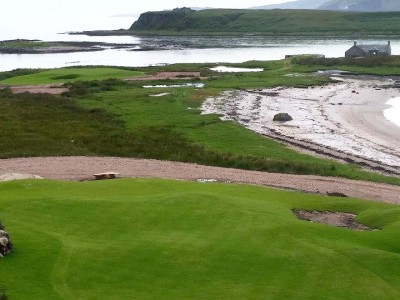 View is from the 16th green looking over the 12th green in the foreground and down to the 11th green and boathouse.

“These pictures were about as good as I could get, they in no way do justice to what is going to be an incredible golf course,” he wrote on his Facebook post that featured the course photos you see here. “We were gobsmacked by how good it is.”

He wrote that Harrison had a chance of lifetime and is taking full advantage.

“Bob has fallen heir to every designers dream here, a great site with epic views and an owner that is backing him with a huge budget and no rules. In return Bob has given him what looks like becoming one of the UK`s highest ranked courses.”

According to Freeman, there is at least one historical site on Jura.

View on the first hole. According to Simon Freeman, “the classic Scottish dyke will be retained and used in the design.”

“I’m told that a ruined building… used to be the jail where the MacDonalds kept their prisoners when they were at the height of their powers as Lords of The Isles,” he wrote.

According to Wikipedia, “Jura is mountainous, bare and infertile, covered largely by vast areas of blanket bog, hence its small population. In a list of the island of Scotland ranked by size, Jura comes eighth, whereas ranked by population it comes thirty-first.”

Besides Ardfin, there are six other estates on the island, Inver, Jura Forest, Tarbert, Ruantallain, Ardlussa, and Barnhill. There is also a relatively small area owned by Forestry Commission Scotland. Barnhill consists of one farmhouse but is famous as being the place where George Orwell completed his novel, Nineteen Eighty-Four.

The island’s topography is dominated by three mountains known as The Paps of Jura.

Announcing his plans last summer, Mr. Harrison, who’s developed courses in Australasia and Asia said: “Nothing I’ve seen anywhere in the world competes with the sheer beauty of the Jura site.”