A Connecticut-based developer is proposing to lease the Course at Yale, purchase the nearby Country Club of Woodbridge from the town, build a new layout there and combine the two into a “world-class” daily fee golf resort that includes 80 cabins. 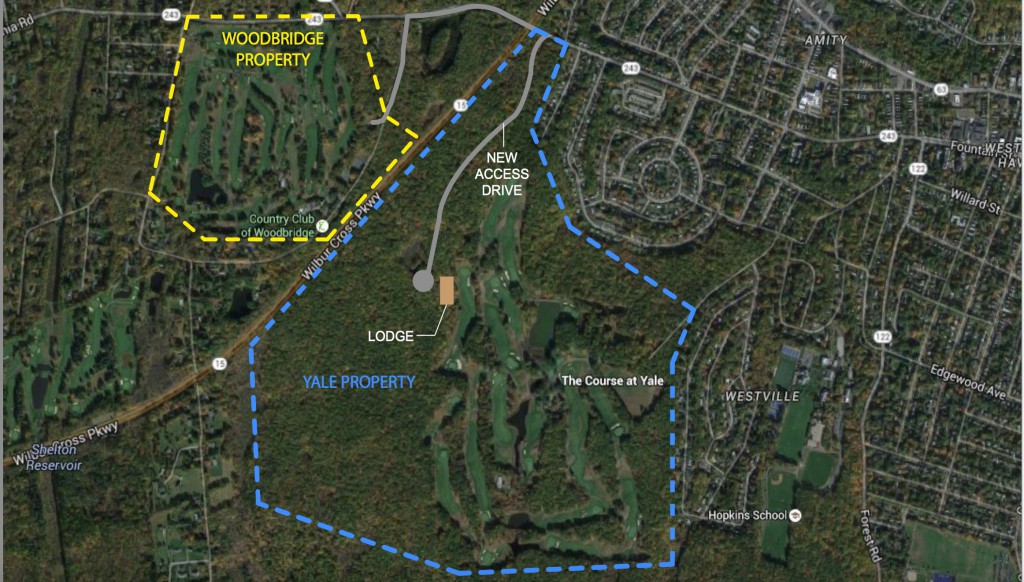 According to a proposal made to the town July 16, the goal is:

To create the premier publicly accessible, 36-hole golf destination in America, while preserving hundreds of acres of open space in perpetuity.

•  The Course at Yale – Restore and renovate classical 1926 C.B. Macdonald design to its full potential, also overseen by Gil Hanse.

•  The Lodge at Yale – Build an 80 room lodging facility adjacent to hole #6 at The Course at Yale, with new entrance road off of Fountain Street/ Ansonia Road and parking for both golf courses at Lodge.

An aerial photograph provided to the town as part of the presentation shows the areas of the two courses. They are separated by a portion of forest owned by Yale and by Route 15, known as the Merrit Parkway, a heavily-travelled four-lane highway.

The proposal was made by Redan Reserve LLC, a Delaware limited liability company controlled by Roland W. Betts. The company gives a Stanford, Conn. address.

Betts was the developer of the failed Yale Farms project in Northwestern Conn., described by the Hartford Courant newspaper as “18-hole luxury golf course on the…  780-acre Yale Farm, a former mountainside estate in Norfolk and North Canaan.”

The project received heavy opposition from neighbors and environmentalists.

In the proposal, Betts said his company will bring in architect Gil Hanse, designer of the Olympic golf course in Rio and who he describes as “one of the top five golf course architects in the world,” without explaining what that means. He also said both courses would be ranked “among the top 100 golf courses in the world.”

Charles Blair Macdonald is incorrectly named as the architect of the Yale course in the proposal. It was designed by Seth Raynor, Macdonald’s protege, with Macdonald consulting. The course opened in 1926.

Woodbridge is a 1938 Orrin Smith design and was originally a private club. It folded within the last 10 years with the town buying the property.

Betts’ Wikipedia entry reads in part that he “is an investor, film producer, and owner of Chelsea Piers in New York City. A classmate and Delta Kappa Epsilon (DKE) fraternity brother of George W. Bush. He was lead owner in Bush’s Texas Rangers (baseball team) partnership.”