The few Greg Norman-designed courses I’ve encountered in my life left me, at best, less than impressed and, at worst, offended. So it was with trepidation that I teed it up at the El Camaleon course at the Mayakoba resort, Riviera Maya, Mexico, just south of Cancun. The resort has hotels by Fairmont, Banyan Tree and Rosewood. 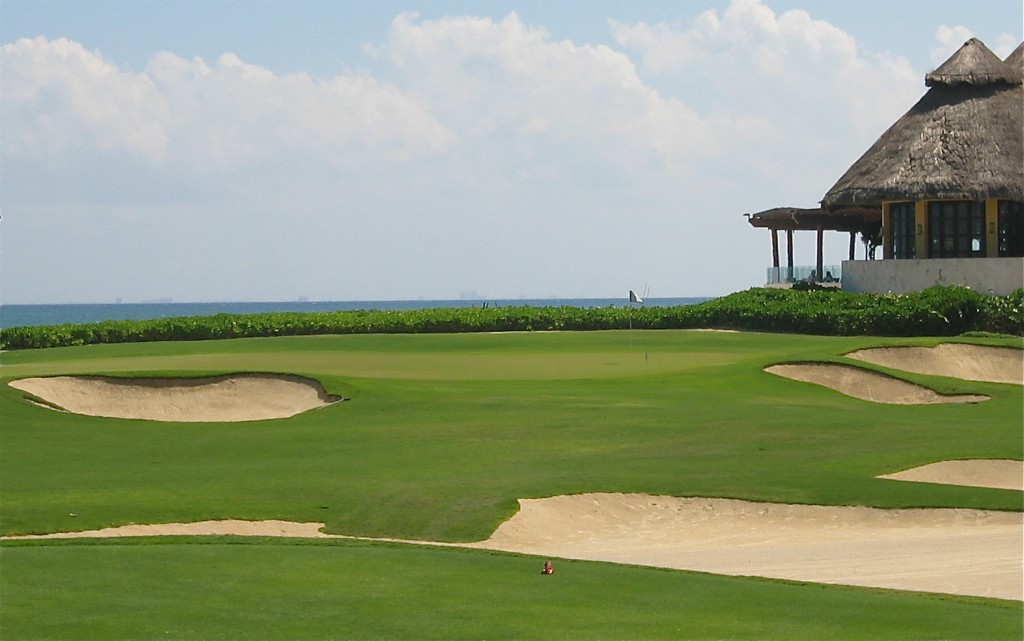 The day turned into a delightful surprise. The course, home to the PGA Tour’s Mayakoba Golf Classic, flows wonderfully over the land while providing and interesting and challenging mix holes that require thought. It is a layout where a shot maker is rewarded for well-played efforts and the higher handicaps can still negotiate their way around without facing an abundance of force carries. A brackish water canal carved out of the rock comes into play on many of the holes, but only if the shot is offline.For the most part, the tee shots on the par-4s and par-5s don’t deal with bunkers, although there are preferred angles from which to approach the greens.

El Camaleon isn’t just a very good resort course; it’s a very good course that would stand out if it was a daily fee or a private club.

I played it the day after the Mayakoba Golf Classic with another writer from TheAPosition.com, Bob Cullen (You can find his review of the course by clicking here) and a local in the golf travel business, Enrique.

If there was one area of the Norman design that was slightly disappointing, it was the par-3s. Two, no. 7 and no. 15, are almost identical up-hill tee shots with greens just about hanging over the beach behind them.  They are each a wonderful hole forcing players to deal with the wind, and in the case of the 15th, an impromptu bathing suit-clad gallery of beach goers, but together they are redundant. I think the same of the inland par-3s that are the second and 10th hole. Both slope gently down from tee to green with trouble on one side and a bailout area on the other.

On the other hand, the mix of par-4 and par-5s were wonderful. The short par-4 17th allows for the layup option off the tee with a nicely placed lateral hazard lurking near the landing area. A wayward shot with the driver can end up either in the canal left or rough on the right. Although right might be safe, the second shot from that angle is to a green that tilts slightly towards the canal that is lurking. We played the hole from about 350 yards. I hit hybrid off the tee, missed the green right, hit a pitch that I liked at first and that at least one person in the group thought was good enough to compliment even before the ball stopped rolling.  It did not come to rest, though,  until it was in the canal. I made 7.

The sixth is another of the shorter 4s at 360 from the whites. This time, however, the approach shot has to carry over water. On the line to the green you must also deal with a long strip bunker. A bailout area, however, is provided to the left of the putting surface allowing for the bunker to be avoided on the approach. 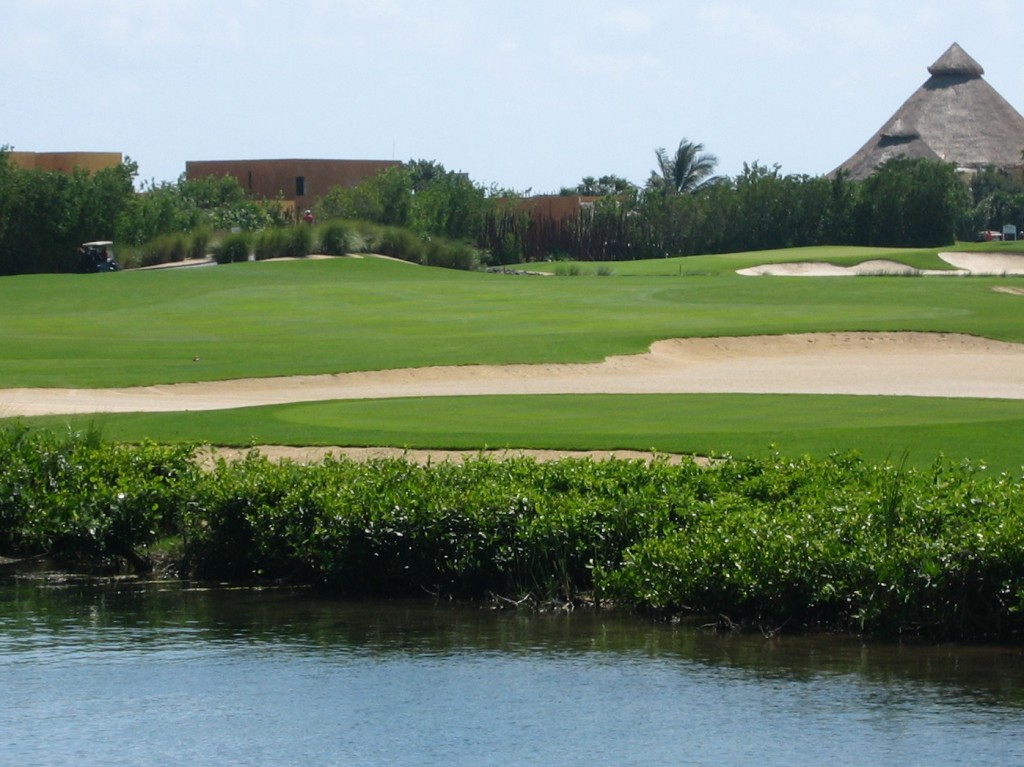 The par-4 sixth hole at the El Camaleon course.

The 12th, which plays 426 yards from the white tees, appears straight and benign with a natural rock wall right and rough left, but on close inspection the hole is designed so that a tee shot too far left will leave an approach  blocked out by a group of trees jutting out well beyond the landing area. In order to get to the green from that angle, a shot with a pronounced right-to-left ball flight is required.

The par-5s kick off with a beauty at the first hole. It plays 532 from the whites as  the entire hole is visible from the tee. The players eye, however, is immediately drawn to a cenote smack dab in the middle of the fairway. A cenote is a sinkhole resulting from the collapse of limestone bedrock. Norman positioned in a wonderful location that falls between the first and second landing areas for the average player and at the end of the first-shot landing areas for the pros who play the hole (no. 4 in the tournament rotation) at 554 yards. 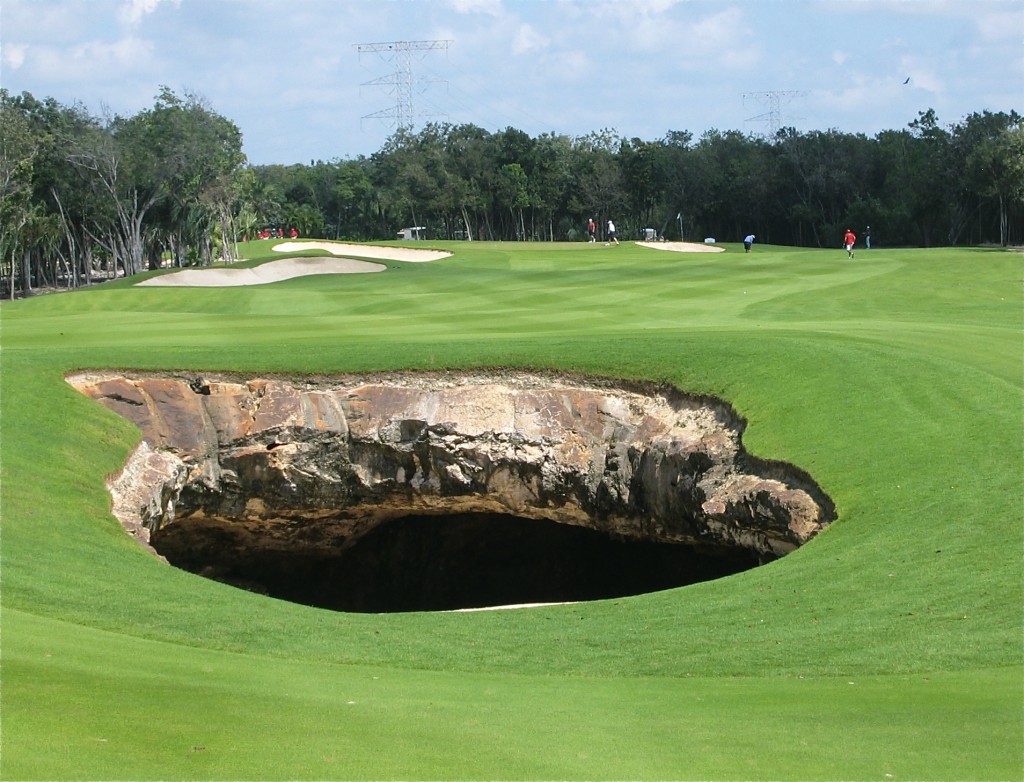 The 13th, which plays 503 from the whites, has visually deceiving second-shot bunker on the left hand side. With a mangrove to the right, the play is to take on the large sand hazard but it appears to sneak further into the fairway than it actually does. By traversing the bolder route, the green is open from that angle while from the right, one must deal with a greenside bunker. Simple yet effective architecture.

The putting surfaces throughout Mayakoba are a delight. Since the flagsticks were left in their tough Sunday tournament positions, the approach shots from Bob, Enrique and me were rarely close to the cup and we invariably found ourselves with long putts giving us a good feel for the greens. Superintendent Kurt von Hofen and his staff do a wonderful job maintaining the layout.

El Camaleon is to be lauded for cutting back the mangrove, which surrounds the layout, as it does on every course in the region. Here, in contrast to the other places we golfed, a ball that slightly misses the hole corridor is not irrevocably lost. Albeit the recovery shot might not be able to reach the green, but a punch-out it is a far better alternative to taking a penalty stroke.