Hey, the greatest golf tournament in the world begins today!

No it doesn’t.  The Masters is this week. The greatest golf tournament in the world, the Open Championship, isn’t until July. It’s being played at the Old Course in St. 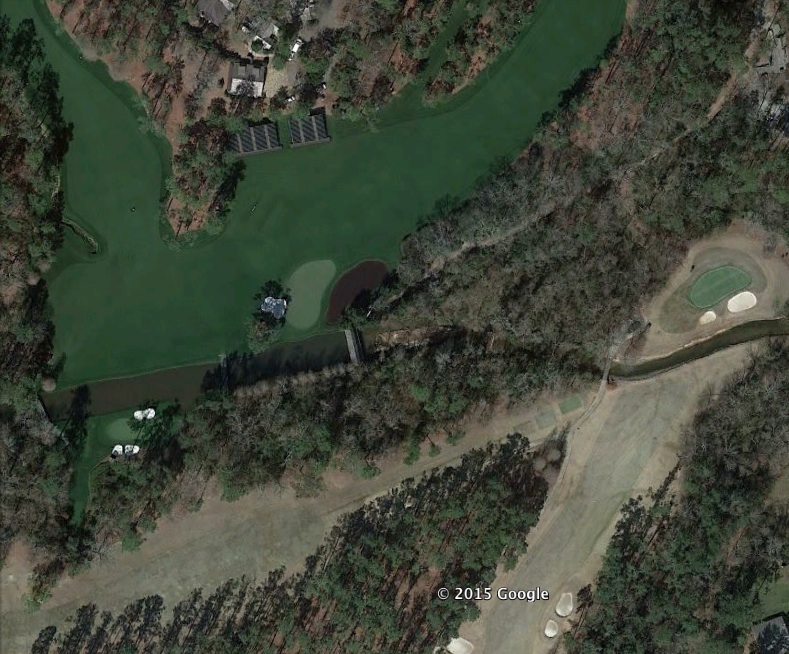 Andrews, Scotland, the greatest golf course in the world.

You may have heard of it. The men who designed Augusta National Golf Club, Alister Mackenzie and Bobby Jones, used the Old Course, which they thought to be the finest and fairest test of golf there was, as the inspiration for Augusta.

From an environmental standpoint, if Augusta is not the low point of all American golf courses, it’s standing on the doorstep, in large part because of its prominence, but also because of its agronomic practices.

The photo above is of part of the 8th and 9th holes of Augusta Country Club and the 11th, fairway and green (on the right), the entire 12th and the 13th tee and fairway of Augusta National. If you’re not sure which is which, the ACC holes have dormant bermudagrass and look natural for that part of Georgia for this time of the year. ANGC looks like a video game golf course, fake and perverse, with all the dormant bermuda overseeded with most likely perennial rye grass.

ANGC is by no means the only club to overseed wall to wall, high-end layouts, private and resorts, across the south from Florida to Arizona do it, but Augusta is the most visible. The insistence of the membership that they are good stewards of the land is laughable as long as the club overseeds every God blessed piece of ground that doesn’t have a tree or azalea on it. 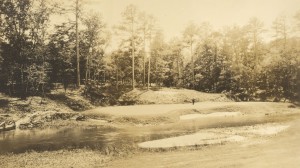 Originally, Augusta National was a natural golf course. This is the 12th green.

Let’s cut the club some slack since it does host a major tournament (that was for decades played on a dormant bermudagrass  golf course). If Augusta, though, is going to overseed then how about just doing it on the in-play areas? In the above photo there are probably two acres of grass that does not need to be green; from the grandstands behind the 12th tee, to Rae’s Creek, could be dormant and not affect play.

Rae’s Creek, by the way, is another example of how Augusta National manipulates nature. Cutting through Augusta Country Club, the creek is a meandering stream. On the Augusta National property it turns into what looks like barge canal.

For the better part of a decade now there has been a “Sustainable Golf” movement. The idea is to maintain golf courses in a way that allows for top-notch playing conditions while taking into consideration among other concerns,  protecting the land on which the course is built, minimizing water usage and pollution, and also reducing chemical inputs. Overseeding is counter to Sustainable Golf. Augusta is the polar opposite of a sustainable golf course.

Here’s how it works.

(We’ll just concentrate on the trees, fairways, approaches and roughs and save the bentgrass greens for another day.) 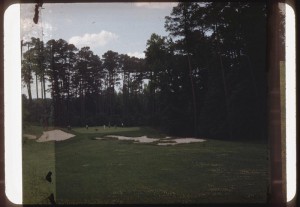 The 10th hole in 1948. Notice the dandelions. (Courtesy The Noer/Milorganite® Image Collection)

The club scalps the bermuda and overseeds in September when the bermuda is still thriving. It shuts down typically in November when the first heavy frost arrives. Since the rye needs a kick to get going, it is fertilized and watered. If the course was not overseeded, there would be no water or fertilizer application after November until the bermuda came out of dormancy, usually around the end of of February.

Once the ryegrass is established, it is regularly mowed, irrigated, fed, as well as sprayed with pesticides to help it withstand disease. Again, with dormant bermuda, there would be no need for any of this.

In the end, depending on the weather, Augusta National uses hundreds of thousand of gallons of water, if not millions, it does not need to in order to create the facade of the perfect golf course.

In the spring, the ryegrass must be removed so that the thick stand of turf does not shade the bermudagrass, hindering its path back to growth. To do this, every blade of ryegrass is sprayed with herbicide to kill it. Again, a procedure unneeded if the course remained as bermudagrass. ANGC closes the week after the Masters and reopens in the fall.

Here’s the kicker in all this, dormant bermudagrass makes a wonderful playing surface, including on greens. At a facility like Augusta where there is so little play, wear issues are not a concern. If problems do arrive along walkways or entrance and exit points to tees and greens, those small areas could be overseeded. If, however, wear is an issue because of the tournament, then just overseed the areas that involve the playing of golf.

That, though, wouldn’t not give the perception of perfection and that’s just not the Augusta way, Sustainable Golf be damned.