When I last visited Maui 21 years ago, the all-suite Kea Lani Hotel was under construction. Kea Lani, I was told, translated as “Heavenly White” in Hawaiian. True to form, white was the dominant color throughout the oceanfront property, which then as now has spectacular views of the West Maui Mountains and the offshore islands of Lanai and Kahoolawe.

In marked contrast to other Hawaiian hotels, Kea Lani had Mediterranean-style touches, with distinctive bleached-white domes and minarets. Jose Luis Esquerra, best known for his work at Las Hadas resort in Manzanilla, Mexico, was the architect. The look was eclectic, but I wasn’t quite sure what a hotel like this was doing in Hawaii.

The curved walls, arched entryways and wrap-around balconies remain, but nearly everything else has been transformed at Kea Lani since Fairmont re-flagged Maui’s only all-suite resort hotel in 2001. Part of the initial upgrade at The Fairmont Kea Lani, the brand’s first hotel in the Pacific, was to redo the all-white guest rooms to include more Hawaiian colors, a welcome change. The hotel now offers a full-service spa and fitness center, three swimming pools, a 140-foot water slide for kids of all ages, and a year-round children’s program. 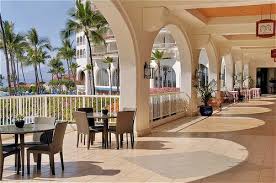 Under the guiding hand of general manager Charles Head, an affable Englishman whose previous post was at Fairmont’s property in St. Andrews, Scotland, more than $28 million has spent over the past three years to enliven and refresh the resort. And because more and more travelers are seeking an experience that provides a deeper connection to the place they are visiting, the hotel has responded by hiring a full-time “Cultural Coach,” Jonelle Kamai, who curates authentic Hawaiian experiences ranging from educational classes and musical celebrations to outrigger canoe paddling and Hawaiian language classes. Guests can volunteer to restore ancient fish ponds or plant native species, or explore Maui’s leading historic sites, such as Lahaina, Haleakala Crater and Iao Valley. The Fairmont has also forged a partnership with University of Hawaii Maui College in order to harness the talent of the island’s top culinary and music students.

Speaking of culinary: The debut last April of Ko following a $5 million renovation has raised the profile of the hotel significantly. Under the guidance of chef Tylun Pang, the restaurant reaches back to the roots of Hawaiian cuisine, when Filipino, Chinese, Japanese and Portuguese immigrants came to work alongside Hawaiians, Tahitians and Fijians. The result: an incredibly varied style of multi-cultural cuisine that Pang has revived and perfected. Pang, who grew up exploring the Chinatown markets of Honolulu, learned the ins and outs of fish, game and produce from every corner of the Asia-Pacific region. After countless hours of experimenting with flavor profiles and refining his techniques, he took a look around his kitchen and realized that his staff was descended from the plantation workers who arrived in Hawaii generations ago. Taking inspiration from them, and gleaning family recipes that had been handed down through the years, Pang was given the freedom to replace the hotel’s Italian restaurant with a beautiful room that celebrates the islands’ plantation past. As we discovered, Pang has evolved a menu at Ko (Hawaiian for sugarcane) that is a complete mash-up of Asian cuisine styles. In other words, classically Hawaiian, culturally relevant–and completely delicious.