For sheer folly, nothing can quite match a travel magazine’s attempt to rate golf resorts.

The magazine’s 15th Golf Poll is even more outlandish than ever. You’d think they would have worked out the kinks of their Readers’ Poll by now. But no. They’re willing to let travelers who play golf (vs. golfers who travel) decide who’s top-notch, who’s underachieving, and who’s guilty by omission. It takes a special commitment to let the inmates run the asylum.

In my years as travel editor of GOLF Magazine, we (the panel of editors who governed the Gold & Silver Medal resort awards program) acknowledged the reality of what we were doing. If the Lodge at Pebble Beach came up a half point short of Gold, as it did one year, we had to debate the consequences of a demotion to Silver. By taking into account our own experiences at the resort, we were able to keep Pebble, even with its minor glitches, where it belongs—in the first rank of American golf.

My guess is that the editors at Conde Nast Traveler (unnamed) who administer the Golf Poll do not play golf, may never have held a club, and certainly have never visited a golf resort for the intended purpose. There’s no other way they could splatter so much egg on their faces year after year, and do so without a hint of irony. Get a spatula, I say.

Don’t get me wrong. The six-page feature isn’t all bad. For example, there’s this quote from Arnold Palmer, which I first saw posted in the clubhouse at Shinnecock Hills several years ago: “What other people may find in poetry or art museums, I find in the flight of a good drive.” Sadly, the survey lands with a thud shortly after that.

Let’s start with the magazine’s Methodology. The 2011 Golf Poll results were derived from last year’s Readers’ Choice Survey, “whose questionnaire was available through a secure Web site.” It continues: “Tabulation of the 25,916 responses was done by Global Market Insite, Inc., of Boston. Golf resorts were rated excellent, very good, good, fair, or poor on eight criteria: Course Design & Access, Golf Staff & Services, Rooms, Service, Food/Dining, Location, Overall Design, and Activities/Facilities. Criterion scores, which represent the percentage of respondents who rated a golf resort excellent or very good, were averaged to determine the overall score. Only resorts that received a required minimum number of responses were included in these rankings.”

So far so good, right? Now let’s turn to the rankings.

With four of the six criteria weighted towards a resort’s non-golf aspects, it makes sense that a place like The Phoenician would be ranked the No. 1 resort in Arizona, ahead of Four Seasons Troon North, the Boulders and others with better golf.

Their grasp was less sure in the Western U.S. In a million attempts, who would ever guess that the top golf resort in the West would be Westin Riverfront Resort & Spa in Avon, Colo., in essence a ski resort that garners a perfect 100 score for both Course Design & Access and Golf Staff & Services. Located in the Vail Valley near Beaver Creek, the Westin provides access to several area clubs. The first listed on its website is Red Sky Golf Club, a semi-private 36-hole facility with highly regarded designs by Tom Fazio and Greg Norman. Is this the golf club that rates a perfect score? The magazine’s scorecard gives no indication.

Here’s what’s really annoying. The resort directly affiliated with Red Sky GC is the Ritz-Carlton, Bachelor Gulch, also in Avon. It’s No. 5 on the Top 10 U.S. Western list. Can you guess its score for Course Design & Access and Golf Staff & Services at the identical facility as above? The Ritz tallies 92.1 and 86.8, respectively.

Hey, this stuff happens, right? But when I saw that the Bellagio in Las Vegas (No. 4), which has no golf course of its own, beat out Bandon Dunes Golf Resort (No. 10), I canceled my subscription on the spot. That, dear reader, is beyond the pale. Of course, we can be comforted by the fact that the editors are not massaging the numbers, and for that they’re to be congratulated, I suppose, but only as prisoners of statistics. Clearly there’s lunacy enough at Conde Nast’s headquarters to commit this stuff to print, discerning readers be damned.

Hold your passport tight while we review the rest of the world.

Does Ritz-Carlton, Grand Cayman really belong at No. 2 on the Foreign list?

Let’s start with Scotland and Ireland. Despite their relatively low marks for golf, the aggregate scores at Ireland’s Ashford Castle (No. 9) and Dromoland (No. 14) place them ahead of Turnberry (No. 15), home of the Ailsa Course, a British Open venue. Unconscionable. Suspiciously, Turnberry receives an identical 80.4 score for Rooms, Service and Food/Dining. C’mon. We know the Scots can be dour. But anyone who’s enjoyed a meal in that glorious dining room perched high above the links as the sun sinks into the sea cannot fail to be impressed. And yet somehow the readers were.

I also take issue with the Old Course Hotel in St. Andrews at No. 10, a very fine establishment pressed to the edge of the Road Hole that unfortunately cannot guarantee a tee time on the Old Course. The hotel’s course of record is the Duke’s Course, a hilly inland venue that one does not cross an ocean to play. But again, it is unclear if this or some other venue earned the 94.3 Course Design & Access ranking. Again, where are the names to match the numbers?

But here’s the biggest gaffe on the overseas list: No Gleneagles. A future Ryder Cup site, the resort boasts the brilliant Kings and Queens courses by James Braid plus a magnificent hotel in the foothills of the Scottish Highlands. Absent from the list! To paraphrase a comment Tommy Armour once made about the visceral appeal of Pinehurst, the folks who failed to recognize the intrinsic quality of Gleneagles should be ruled out of the game for life. (By the way, Pinehurst, at No. 20, is in last place among the Top 20 Southern U.S. Golf Resorts, one slot behind the Tides Inn in Arlington, Va.).

Located an hour’s drive south of Cancun in Mexico’s Riviera Maya, Mayakoba is this century’s poster child for an eco-sensitive golf development. It sports a Greg Norman-designed course, called El Camaleon, that hosts an annual PGA Tour event. Transitioning from dense jungle to meandering waterways to seaside dunes, the well-groomed layout, swept by ocean breezes, is a delightful spread. Paired with the Rosewood Mayakoba, it grabs the No. 1 spot on the list. (Fairmont Mayakoba, where I enjoyed a recent visit, is No. 16). 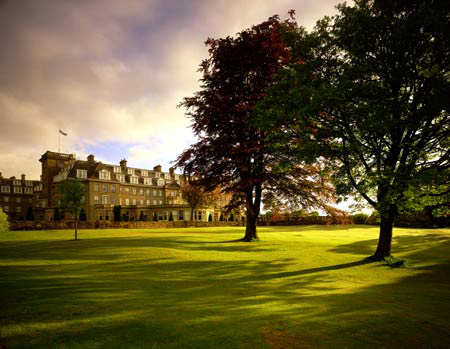 We could debate the readers’ choice of Rosewood Mayakoba as the finest golf resort outside the U.S., but let’s parse the list more closely. Among the Top 25, nine are in Mexico, including five in Los Cabos.

Don’t get me wrong. I love golf in Mexico. It’s generally underrated. In particular, the resorts and courses in Los Cabos at the tip of Baja California Sur, which combine ocean, mountain and desert settings, are spectacular. But this betrays a certain provincialism. No worthy resorts in Africa, Asia or mainland Europe? Unacceptable.

I also love golf in the Caribbean, and here again the Golf Poll disappoints. The No. 2 resort on the list—wait for it–is Ritz-Carlton, Grand Cayman. The resort’s golf score is a lowly 73.7, which is as it should be for a pint-sized 9-holer called Blue Tip that the Shark laid out one afternoon. Yet there it sits at No. 2. In the world!

I’ve been to the Cayman Islands. One does not go there to play golf. One goes there to administer one’s offshore accounts, or to glide through the gin-clear waters to experience some of the finest scuba diving in the hemisphere. (The latter activity was my reason to visit).

The readers who rated this place up should have their clubs taken away. A diligent magazine with an ounce of integrity could make it happen.

I’m O.K. with the other Caribbean entries on the list, but conspicuously absent is Casa de Campo in the Dominican Republic. This 7,000-acre playground on the island’s south coast offers a pair of Pete Dye masterpieces (Teeth of the Dog and Dye Fore) plus greatly improved accommodations and restaurants. It has set the pace for quality golf in the islands for 40 years. It’s an insult that a Ritz-Carlton with a 9-hole course is on the list and Casa de Campo is not.

In sum, the magazine’s Top 25 Foreign Golf Resorts, like the domestic arrangement, is an utter mishmash, almost comically bad.

Conde Nast Traveler should rewrite its opening quote from Percy Boomer: “If you wish to hide your character, do not play golf.” It should read, “If you wish to publish a Golf Poll, do not be a New York City-based magazine whose clueless editors and luxury-prone readers wouldn’t know a golf course from a tar pit.”