When the asteroid or comet the ancient Mayans called ‘Chicxulub’ smashed into Mexico’s Yucatan Peninsula 65 million years ago, I’m guessing the astral body may have had dimples.

OK, I’m being flip. This ball of fire was six to 12 miles wide, was a billion times more explosive than the bombs dropped on Hiroshima and Nagasaki, plunged earth into icy darkness for six months, and wiped out the dinosaurs along with half the species on the planet.

Today, the only evidence of the colossal impact is found in the Yucatan’s porous limestone, which is honeycombed with subterranean caves, rivers and cenotes, or water-filled sinkholes.

Fast forward to the early 1970’s. FONATUR, a government agency, establishes its first Integrally Planned Resort at the Yucatan Peninsula’s northeast tip, transforming a sleepy fishing village into the sun ‘n surf destination of Cancun. Some allowance is made for the chasing of the little white dimpled ball in and around the prominent sandbar on which the first hotels were built.

With roughly $160 million invested over the past eight years in golf-related projects along the Riviera Maya, which stretches for nearly 90 miles south of Cancun to the Sian Ka’an Biosphere Reserve, a UNESCO World Heritage Site, there are now more than a dozen courses under the umbrella of the Mexican Caribbean Golf Course Association. Top designs by Jack Nicklaus, Greg Norman and others, coupled with glorious beaches and Mayan ruins, have transformed the region into an appealing and readily accessible golf destination.

There is more. The association’s president, Jose “Pepe” Acevedo, has a “green dream”: to convert the Mexican Caribbean into the first golf destination in the world to obtain a joint environmental certificate from the Golf Environment Organization (GEO), an international non-profit committed to strengthening the ties between people, golf and the environment.

Acevedo is the director at Bahia Principe, a new all-inclusive resort and residential development an hour’s drive south of Cancun. In addition to a spectacular stretch of beach, its prime amenity is Riviera Maya Golf Club, a Robert Trent Jones, Jr.-designed facility with a full-sized 18-hole course, a nine-hole par-3 course, and a third regulation nine in the works.

During the development of the golf complex, a flora and fauna recuperation program was followed in conjunction with the Eco-Bahia Foundation. According to Acevedo, the program guarantees the conservation and protection of the ecosystem, native species and endangered species, including the facilitation of sea turtle nesting. The region’s landscapes were preserved during construction, and a large number of plant species were relocated and later transplanted.

Palace Resorts’ owner Jose Chapur believes environmental leadership goes to the heart of his company’s business. “In developing golf around Cancun and the Riviera Maya, we have embraced the environmental richness of our jungle landscape and taken every possible opportunity to conserve and enhance Mexico’s natural and cultural assets,” he said.

Antonio Ortiz, environmental director for Palace Resorts, added: “The great diversity of wildlife occupying our mangrove swamps includes anteaters, white-tailed deer, crocodiles and a significant collection of birds, smaller reptiles and other mammals. These two properties border an area of national ecological importance in the Mesoamerican reef, and a significant area of mangrove swamps called the Nichupte Lagoon.” Management practices employed on the two courses, Ortiz added, have contributed significantly to increased levels of biodiversity.

Phil Krick, Jr. is the director of golf for Palace Resorts. I met him a few years ago at Reserva Conchal, a golf resort in Costa Rica where he had worked for over 10 years. He told me without hesitation that while Costa Rica enjoys a worldwide reputation as a “green” destination, the Riviera Maya offers far more in the way of eco-archeological parks and attractions. He also noted that the use of salt-tolerant paspalum grasses and alternative organic products “supports healthy ecosystems and bring golfers into contact with the incredible wildlife that inhabits our sites.”

Since its debut five years ago, the region’s poster child for an eco-sensitive resort has been Mayakoba (Mayan for “city on the water”), which was developed by OHL, a Madrid-based development company. OHL hired a team of biologists to complete a six-year inventory of the site’s flora and fauna before seeking government approval in 1999. 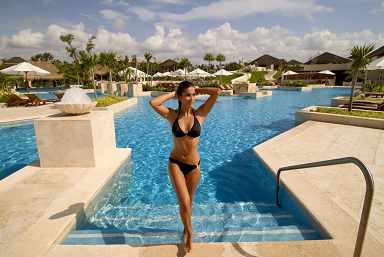 Poolside at The Fairmont Mayakoba

“I wanted to make a luxury project that would also be a luxury for the environment,” said Salvador Linares, OHL’s general manager. Accordingly, the temptation to route the golf course near the sea was resisted. Only two holes on the Greg Norman-designed course, called El Camaleon, were placed among rippled dunes near the beach. Each is a tiny par 3. Overall, the golf experience, like the resort experience, is set well back from the sea.

Having visited the resort complex recently, I can report that there are no development scars at Mayakoba. Employing a Mayan forest management technique called socoleo, the biologists discovered which plants were expendable and which were not. Working with locals, they learned how to cut or graft each tree differently.

Each of the three hotels at Mayakoba—Fairmont, Rosewood and Banyan Tree—were designed to bring nature into the room. Yes, affluent travelers (including golfers) want the big showerheads and other indicators of luxury, but they also want the proper ‘eco’ resonance. After all, a sustainable vacation allows one to sleep more soundly at night.

I slept very soundly in the Riviera Maya. But I must say, hearing about a meteor that crashed into earth and extinguished so much life had me saying my prayers in Spanish before turning out the light.

One Response to “‘Going Green’ in Mexico’s Riviera Maya”