You don’t have to be a history buff to appreciate the Equinox Resort & Spa, the fabled hideaway in the Green Mountains of Vermont. But it helps.

Located at the top of a long slope in the charming village of Manchester, the Equinox, beneficiary of a recent $20 million makeover and now part of Starwood’s Luxury Collection, has been “Serving the Republic since before there was a Republic.” Enlightened management and a dedicated restoration staff has ensured that this historic retreat continues to be one of New England’s most appealing getaways.

Like the early Republic itself, the resort has had its share of ups and downs. A gathering place for colonial revolutionaries, the hotel was shuttered throughout the 1970s, endured a half-hearted rehab in the 1980s, and was revived by the Guinness Corporation in the early 1990s. Wisely, Guinness brought in Rees Jones to remodel its Walter Travis-designed golf course. Twenty years later, it has few rivals in Vermont as an beguiling test of golf.

The discerning eye will notice six different architectural styles dating to 1769 at this AAA-Four Diamond property, its cluster of buildings including the Charles Orvis Inn and the historic 1811 House, once home to Abraham Lincoln’s granddaughter. The resort’s original structure, a hotbed for activists, was known as the Marsh Tavern. This is where Ethan Allen’s younger brother, Ira, proposed confiscating property owned by the Tories in order to raise money for a regiment of the Green Mountain Boys. If the tavern’s walls could talk, what a story they would tell. (Actually, many of the employees at the resort believe the resident ghosts are eloquent enough).

In the wake of a renovation completed in 2008, the main hotel has left behind its dated “country grand” look in favor of a more modern motif. Gone are the heavy tasseled draperies, dark carpets and foursquare furnishings. In their place are brighter, airier public spaces and sparsely dressed windows designed to admit natural light. Neutral earth tones complement the stylish black-and-white photos of area landscapes on the walls in the public areas. The newly decorated guest rooms, with views of the village, mountains or interior gardens, achieve a certain “spacious intimacy.” You know you’re in an antique building, but the rooms, with their muted color palette, feel contemporary.

Current management took care to conserve what was worth preserving, notably the hotel’s eclectic Greek Revival and Federalist character. As was true when Ulysses S. Grant, William Howard Taft, Benjamin Harrison and Theodore Roosevelt were guests of the Equinox, tall white fluted columns grace the porch and facade of the property. However, from inside the hotel, your gaze is directed outward.

With good reason. Looking west from a refurbished sitting area off the lobby is a spectacular two-story view of 3,816-foot Mt. Equinox, the tallest peak in the Taconic range. Nearby is the new Falcon Bar, inspired by the resort’s British School of Falconry. It’s an intimate, subtly lit room with dark wood paneling, comfortable seating, and black-and-white photos of birds of prey on the walls. The house champagne cocktail, made piquant by the use of wild berries marinated in Grand Marnier, is sublime, especially when paired with a plate of local cheeses, dried fruits (black figs, quince, raisins on the vine), and a bowl of Spanish almonds. A perfect afternoon repast. The Falcon Bar opens through French doors to a broad deck shaded by a pair of huge umbrellas. The large open-air fire pit at the edge of the deck is where guests gather on cool evenings to relax and recount the day’s adventures.

For golfers, those adventures take place on the Golf Club at Equinox, which Travis sketched across the valley floor in 1927. Jones, a master in the reconstruction of classic designs that have lost their way, retained the original routing. Thankfully, his many tweaks did not sacrifice the layout’s rustic Yankee character. Greens were recontoured and rebuilt to at least their original size. Bunkers were reshaped and in many cases repositioned to bring them into play. Jones also filled in the spidery network of watery ditches that crisscrossed the fairways. The water on the course is now parallel to the line of play. A new irrigation and drainage system completed the renovations. Managed by Troon Golf, course conditions at the Equinox compare favorably to any resort in New England.

Nestled in a valley, the Equinox is one of Vermont's prettiest courses

Designed for enjoyment, this delightful par-71 layout stretches to 6,423 yards from the gold tees. But mere yardage doesn’t tell the whole story. Many of the holes play uphill to greens every bit as knobby as the surrounding peaks. A heavy layer of morning dew carpets the fairways and keeps the grass lush, minimizing roll. The rough is kept to a sensible height, but thick, impenetrable woods line several of the fairways.

In the interest of creating a test with across-the-board appeal, Jones softened the penal aspects of the course while remaining true to Travis’ design principles. Golfers chasing birdies will need to shape the ball in both directions. Well-placed hazards force players to think strategically. Nothing can be taken for granted on the subtly contoured greens, which can be tricky depending on pin position.

The sporty front nine—none of the par fours exceeds 400 yards from the tips–is a warm-up for the more rigorous back nine. The par-four 13th, named “the best 13th hole in America” by none other than Ben Hogan when he played it, is notorious for its “Snake Pit,” a crater of scrub cut into the right side of a hill that supports the perched green. Even without the snakes, it’s a hazard to be avoided at all costs.

The travails of the 13th are redeemed by the view from behind the 14th tee. Rising from the village is the soaring white steeple of the First Congregational Church and beyond it a hedgerow of blue-green peaks. It’s a view that brings peace to the most restless of players.

The course reasserts itself at the two finishing holes. Each is a long, right-to-left dogleg that usually plays directly into a prevailing wind that sweeps through the valley. Both holes place a premium on distance and accuracy, though the 435-yard 17th, with a nest of bunkers guarding the inside turn of the dogleg, is particularly vexing.

The outdoor patio at the Dormy Grill, overlooking the ninth green, is an ideal place for post-round refreshments, starting with the signature lobster roll. With its panoramic view of the Green Mountains, this may be the prettiest casual dining spot in southern Vermont.

Back at the hotel, which fronts a marble sidewalk shaded by spreading elms and sugar maples, the dining options have been vastly improved. A hearty breakfast awaits at the Colonnade, where pancakes, waffles and French toast can be topped with warmed Vermont maple syrup. The Marsh Tavern, beautifully refurbished, has regional pub fare and a representative selection of Vermont beers on draft, including Otter Creek’s Equinox Ale, a citrusy pale ale brewed for the hotel. The Chop House, recast as a hunter’s lodge specializing in hearty steaks, is accented by leather banquettes, large wooden tables and an original marble hearth inscribed, “L.C. Orvis, 1832.” (The fireplace belonged to Levi Orvis. His son, Charles F. Orvis, a maker of fishing rods and artificial flies whose name is synonymous with fly-fishing, started the marble sidewalk frenzy in Manchester in the 1800s. There are today four miles of weather-worn white marble pathways in town). 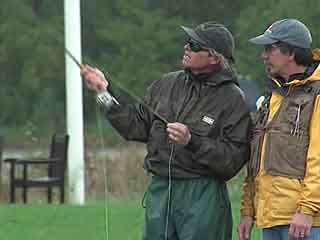 Orvis teaches the art of fly-fishing

While golf is the prime amenity at the Equinox, the range of activities in and around the resort is extensive. The British School of Falconry offers hands-on lessons with trained hawks that will alight on your leather-gloved forearm and surprise you with their appetite for red meat. The Land Rover Experience Driving School features off-road driving instruction on a purpose-built 80-acre course that showcases the ability of these vehicles to traverse seemingly impassable terrain. You may be all thumbs, but the Orvis Fly-Fishing School will have you casting like a pro to eager trout held in the resort’s stocked ponds. (Experienced anglers can try their luck on the famed Battenkill River, which flows through town). The Archery School offers an opportunity to learn this ancient skill from an expert. Hikers can learn about the area’s flora and fauna on an Equinox Preserve Naturalist Hike. More ambitious hikers can head for the hills on the Appalachian and Long trails, located a mere four miles from the resort. History buffs can visit nearby Hildene, a Georgian Revival estate built by Robert Todd Lincoln, the president’s son. The Spa at Equinox incorporates native products in its treatments, including maple sugar, wildflowers and mineral clay. At its entrance, the Spa has on display an impressive antique scale. Early guests stepped on it prior to departure to make sure they had GAINED weight during their stay!

I was surprised to learn a few years ago that shopping is the No. 1 vacation activity in America. Manchester does not disappoint in this category. In addition to specialty shops and antique stores, the village is home to more than 100 designer outlets, from Brooks Brothers and Giorgio Armani to Coach and Tumi.

For me, the joy of walking a vintage golf course cleaved in mountain foothills a stone’s throw from where colonial firebrands resisted the British exceeds the value of any purchase, especially when I pause to see where I am: in a gorgeous corner of Vermont where time stand stills on a beautiful summer day.

Among other programs, the Unlimited Equinox Golf Package, starting at $339 per night, double occupancy, is available weekdays through June 30. Details: http://equinoxresort.com/