Except for the early recordings of Led Zeppelin, I was never much of a heavy metal fan. Spinal Tap yes, heavy metal no. However, a news item just crossed my desk that may have me rethinking my feelings about the perpetrators of thrash rock. Roll Over, Beethoven? The time may have come.

Historically, rockers have long been drawn to the game of golf. Golf needs rhythm. Musicians have it. They also perform at night, which leaves them plenty of daylight for golf. Except for Tommy Lee of Motley Crue–his Jagermeister-infused outings on courses around Los Angeles are the stuff of legend–most of the musicians I’ve met over the years view the golf course as a wholesome refuge from their usual haunts. A few of them, like Alice Cooper, Huey Lewis, Glenn Frey of the Eagles and many others, enjoy golf to the fullest and carry very respectable handicaps.

But to my knowledge no one in the music industry has entered the field of golf course design. That distinction now falls to K.K. Downing, lead guitarist of the heavy metal band Judas Priest.

On 350 acres of rolling, wooded land in the heart of Shropshire west of Birmingham, England, Downing has set aside his Gibson Flying V axe for a shovel at Astbury Hall, a 19th-century estate that he calls home. Nine holes opened to the public earlier this year, with the second nine slated to open in mid-September, 2010. According to Troon Golf, which will manage golf operations at Astbury Hall, the course combines “natural features, tactically placed bunkers and beautifully manicured playing surfaces that have been subtly contoured to USGA standards.” Black leather meets blue blazer.

Downing, a heavy metal icon and Midlands native, is committed to the project. “Astbury Hall has been born from my experiences on golf courses from around the world,” he said. “I am fortunate enough to have played some of the finest the world has to offer and I feel privileged to create a property that encompasses all my cherished experiences. I have been lucky to work in two industries that have allowed me to be so creative, especially golf course architecture, which has enabled the visions in my mind to be transformed into a reality.” Ah, the visions. Thirty years after the release of British Steel, Judas Priest’s first studio album, pictures form not only of youthful masses gyrating to high-decibel rock, but of lovely cultivated meadows and a game redolent of civility.

The pencil-thin, long-maned, 58-year-old Dowling recently related this story to The Shropshire Magazine:

“I remember in about ’81 or ’82 being on tour in America with a young, up-and-coming band by the name of Def Leppard. We were tanking it up in a bar with them on a day off and the challenge went out for a golf match between Def Leppard and Priest. We kind of fancied ourselves more as tennis players, but we got on a tee the next day, hangovers and all, and they well and truly kicked our butts.” Despite the setback, he added, “From that point on it seemed to be a good thing to do on a day off. It helped me relax. The game cleanses your mind because all you are focusing on is hitting that bloody little ball and getting it to go in a straight line. Golf has helped me keep my sanity.” A frame of mind any seasoned rocker can appreciate. 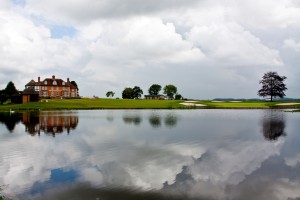 In addition to a planned third nine, Astbury Hall will offer 14 holiday lodges and eight 3-bedroom “barn conversions” in several different designs. Given its idyllic setting and expected high standards for quality and service, Astbury Hall has the potential to evolve into one of the more eclectic and charming English country estates with golf on site, a la The Grove and Bovey Castle. I’d be quite surprised if the flags on the pins at Astbury Hall aren’t black. And studded with heavy metal rivets.