On a farm where champion Holstein cattle were once raised an hour’s drive north of Milwaukee, Wisc., Jack Nicklaus, the Golden Bear, has created an alter ego of sorts in The Bull at Pinehurst Farms.

Just as the farm had been a showcase of agriculture for over 150 years, The Bull, melded to glacial landforms and drained by a tributary of the Sheboygan River, is a stellar parkland course designed to withstand the latest high-tech equipment.

When I visited the facility nine years ago, I met with owner David Bachmann, Jr. We were about to jump in a cart and tour the soon-to-open course when a Fed Ex truck pulled up to a barn. Bachmann excused himself, disappeared into the barn and reappeared with a well-wrapped package, which he handed to the driver. “Bull semen bound for Japan,” he said with a laugh. “Worth about $18,000.”

Shortly after most (but not all) of the Pinehurst herd was dispersed in 1999, Bachmann decided to build a course on the family farm. He brought in Nicklaus to have a look at what would become his first signature design in Wisconsin. Jack fell in love with the property and relished the challenge of building a golf course on the doorstep of Destination Kohler’s 72-hole golf empire. Bachmann, who laid out a rudimentary five-hole course on the farm as a youngster, chuckled when asked if he had any input in the design process: “I didn’t ask Jack to feed my cows, but I had some ideas for certain portions of the property.”

Not surprisingly, each hole on The Bull is named for a champion sire, and each presents a rip-snorting challenge. Five sets of tees provide good flexibility, though the Bull tees, at 7,332 yards, have been known to trample long hitters with low handicaps. From any set of tees, golfers must play smart, tactical shots to score well. You may not be able to tame The Bull, but you can at least make a truce with it.

On a site marked by hardwoods, thickets of birch and 75 feet of elevation change, Nicklaus limited his earthworks to let Nature take the lead. “The uniqueness (of the course) is the terrain itself and what it produced,” Nicklaus said shortly before the course opened in 2003. “This is a strong, strong golf course, with not a weak link on the property.” 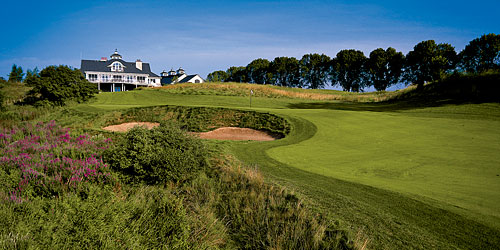 The Bull’s fairways are generous, but ponds, wetlands and the Onion River, a tributary of the Sheboygan, come into play on 16 holes. The sculpted bunkers, 75 in all, are well-placed. The bentgrass greens are firm, fast and in my opinion among the most imaginatively contoured Nicklaus has ever built.

The first three holes on The Bull, routed on plain pastureland framed in places by a split-rail fence, required some massaging to round them into form. From No. 4 onward, the course enters a realm of “what’s been here forever,” according to Bachmann. The par-5 fourth, a gentle double-dogleg with a phalanx of bunkers near the green, introduces players to the wooded ridges and open meadows that define the landscape. It is followed by a scintillating par 4 that can take its place among the finest in the Midwest.

The scene from the fifth tee is riveting. Players face a hairpin-shaped fairway bent sharply from right-to-left around a 40-foot-deep ravine. With a grove of trees to the right and a deep grassy abyss eating into the fairway on the left, the sense of claustrophobia is real, although there is room enough for the drive. The approach shot, which must fly a corner of the cliff, will test your mettle. But carry the gaping bunker beyond the ravine, and a hidden swale in the bail-out area will funnel the ball to the punchbowl green. Few holes anywhere can match the “wow” factor or strategic interest of this modern classic.

The remainder of the front nine unfolds along thickly wooded river banks and rolling pastures indented by ponds and wetlands. The par-3 sixth, pretty and imposing, calls for a carry over a ravine to a two-tiered green that clings to a ridge, with deep bunkers to the left and a small bail-out area on the right. “A heck of a hole,” Jack calls it. Pinched by wetlands, the seventh is a short “driveable” par 4, though most players follow a safe drive with a semi-blind approach to a narrow green perched above a gaping maw of sand. An oxbow loop of the Onion River lurks to the right of the green.

Tall pines frame a typical green site at The Bull

The Bull’s back nine is longer than the front, though its best hole may be the petite par-four 11th, which tempts big hitters to try for the green on their drives. There is an abbreviated fairway at the far end of the pond to the right for those who hit it hard and far, but the smart play is to the left fairway, which leaves a short iron to a small green that tilts to the water.

Bachmann’s favorite hole is the 13th, a majestic par 5 that occupies his personal field of dreams, a place he frolicked as a boy. A thick forest lines the left side of the layout’s No. 1 handicap hole, the fairway angled gently from right to left. Twelve bunkers, including a rare (for Jack) series of cross bunkers, demand that players take careful aim before firing away. The green here, the largest on the course, crests a bluff and slopes from front to back to the river behind. It’s a true three-shotter for most mortals.

In typical Nicklaus fashion, The Bull’s 18th is a bear, a very rigorous par 4 that plays uphill over a lake to a silo and barn on the horizon. Wetlands and a rocky creek will swallow any shots pushed to the right.

After the round, players can repair to the handsome clubhouse, its architecture inspired by the original homestead at Pinehurst Farms. In addition to casual dining on the deck of Champions Restaurant & Bar, golfers can relax in the Bull Pen, a billiard room filled with Green Bay Packers memorabilia; or the Bear’s Den, a cozy upper-level lounge decorated with Jack Nicklaus mementos.

How does The Bull compare to the River and Meadow Valleys courses at Blackwolf Run at Destination Kohler, which are located maybe 10 minutes away as the crow flies? I’d say The Bull splits the difference between the two, with better playability from its multiple sets of forward tees. Pete Dye’s holes are trickier, Jack’s are more straightforward. In the end, the courses at both facilities are great because the land in this corner of Wisconsin is great.

Just as the Kohler layouts represent some of the best design work Pete Dye has done, The Bull at Pinehurst Farms, which honors the property’s agricultural background, can take its place among the best courses Nicklaus has built. Golfers bound for Sheboygan County are the beneficiaries.