Like the Hamptons, winter is off season in Sardinia, the second largest island in the Mediterranean Sea. Still, Valentine’s Day stirs feelings of romance, and no place in all my travels has bowled me over more than the Costa Smeralda, a 35-mile-long stretch of rugged coastline a 45-minute flight from Rome and an hour’s drive from the airport in Olbia. The French Riviera, the Isle of Capri, Marbella, Ibiza—all have their allure as gilded getaways, but none can match Sardinia’s northeast corner.

It takes money, taste and a little bit of luck to create an upper-crust hideaway from scratch. In the early 1960s, Prince Karim Aga Khan IV, the spiritual leader of some 20 million Ismaili Muslims worldwide and a jet-setting billionaire in his spare time, formed a consortium of cronies to purchase and develop the Costa Smeralda (the name is derived from the translucent green hue of the sea). After vast stretches of coastal land was purchased from Sardinian herders and fishermen, imaginations were set free.

A cultured man with preservationist leanings, the Aga Khan saw to it that the wild, untamed region was developed with exceptional care and taste. The resort’s intimate hotels, each with its own personality, were chiseled into wind-sculpted rock above secluded bays and hidden beaches. Artfully blended into the landscape, these hotels resemble weathered Sardinian fishing hamlets and Moorish settlements from another century. Their rough stucco exteriors have been allowed to discolor, while the dull red tile for their roofs was taken from old homes in the interior.

Originally managed by the now-defunct Ciga Hotels group, the Costa Smeralda’s top hotels—Cale di Volpe, Pitrizza, and Romazzino–are now part of Starwood’s Luxury Collection. Each is spectacular in its own way, but Cala di Volpe—the “Bay of Foxes”—is perhaps the most distinctive. 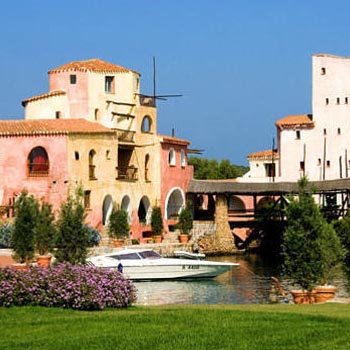 The rustic yet refined cuisine in Cala di Volpe’s candlelit dining room is exceptional. Sardinian seafood specialties–spaghetti alla bottarga (with mullet roe), zuppa del pescatore (Sardinian boullabaise), and pastas with sauces of vongole (clams), tomatoes and basil are beyond compare. Also available is carta di musica (music paper), a parchment-like flatbread named for the rustling sound it makes when eaten dry. (It plays a different melody when brushed with olive oil, sprinkled with rosemary, and heated.) Pecorino sardo–tangy Sardinian ewe’s milk cheese–can be ordered in place of dessert. All dishes are accompanied by surprisingly fine regional wines, particularly the still white Aragosta, dry white Nuragus, and sparkling white Vermentino di Gallura. You could take your worst enemy here and fall in love by the second course.

The hotel, which fronts one of the Costa Smeralda’s most beautiful bays, has a ‘60s retro bar, Il Pontile, perched above the sea. The throbbing basement disco is long gone, but never mind. Cala di Volpe’s Olympic-size saltwater pool blends into the hotel’s gardens, while the hotel’s private beach, a secluded crescent of sand set with blue-canvas chaises and thatched umbrellas, is 10 minutes away by launch. Motorboats are available for coastline tours.

Among his other inspirations, the Aga Khan hired Robert Trent Jones, the dean of the trade at the time, to design a golf course for his budding destination.

Opened in 1972, Pevero Golf Club straddles a promontory separating the Bay of Pevero and Cala di Volpe. So unyielding was the hilly, obdurate terrain that Jones, his arm twisted by necessity, was forced to shelve his usual trademarks and follow the natural rise and fall of the land in his routing. The expense of dynamiting fairways from the rock accounts in part for their narrowness. Jones still managed to engineer a fine layout at the Pevero Golf Club, though the stellar views tend to put the individual challenges of each hole in the shade.

In his book, Golf’s Magnificent Challenge, Jones addressed the construction dilemmas at Pevero. “The Aga Khan…called a meeting to discuss grassing the golf course. He had called in four Italian agronomists who told him that, because there was very little topsoil on the island, he had to bring in enough topsoil to spread a foot of it over the entire course, and it was going to cost millions.

“In the meantime, I had discovered that there was a lot of disintegrated granite on the property that could be crushed into dust and, with proper nutrients added, be used as soil. I said, ‘Your highness, it’s your money, but if you want to take a chance on spending $35,000 for seed, I don’t think you’ll have to spend millions for topsoil.’ Two years later they played the Italian Open there on lush grass growing in granite.”

Because the fairways overlay rock, the ball tends to scoot and roll upon touchdown. Then there’s the wind. The Mistral—the renowned northwest wind of the region—puts pressure on the swing at every turn, given the consequences for a stray shot. On the other hand, this warm, sultry breeze carries the enchanting fragrance of juniper, myrtle and wild strawberries.

Unlike most courses by Jones,  Pevero rewards accuracy, not prodigious hitting. Alitalia’s guide to Italian golf courses has this to say about the course: “The biggest problem here is the impossibility of executing successful recovery shots off the fairway.” It’s an understatement. Pevero’s rough is really rough. Giant nuggets of fissured granite are strewn like marbles across hillsides covered in lupin, lavender and maquis, the latter a thick, scrubby underbrush favored by wild boars. Exit the fairway at Pevero, and simply bid your ball, arrivederci!

Even Pevero’s fairways demand careful scrutiny. At the first hole, a long par four that sweeps into a valley, a trio of olive trees on the right side of the fairway effectively blocks a clear shot at the green. The par-four second hole doglegs sharply to a green backdropped by a massive rock pile that looks transported from Tucson. The massive par-five third hole climbs to a plateau green before plunging downhill at the fourth, where the tee shot is played directly to the sea. Corsica’s sawtooth peaks rise in the far distance. The seventh takes its place among Jones’s best par threes: From a tee cut into the side of a hill bristling with vegetation, the shot is played across a lake to a shallow, well-bunkered green. Like most greens on the course, it is large and speedy, with many subtle breaks that are difficult to read.

For drama and beauty, Pevero GC is in a class of its own

Pevero’s shorter, sportier back nine ranks among the most scenic in continental Europe. At the par-four 13th, the spectacular top-of-the-world views from the green across Cala di Volpe to rugged mountains in Sardinia’s interior outmatch the hole’s challenge. At the par-three 14th, the sea-and-mountain view from the tee is again breathtaking, the hazards posed by the rocky thickets of thorny shrubs lining the fairways dispelled by the vista. Perhaps the stiffest challenge on the incoming nine is found at the uphill par-five 18th, where players climb a bottlenecked fairway to a well-bunkered green set near the handsome clubhouse. Within is a comfortable bar and a pro shop stocked with fine Italian golf togs.

Strategically, Pevero cannot be placed in Jones’s pantheon of great designs. But scenically, it may have no peer among the more than 500 courses he built. Pevero is not a course that can be judged apart from its magnificent surroundings.

The sumptuousness and rustic finery of the Costa Smeralda does not come cheaply. In high season (late June through mid-September), a veritable navy of European aristocrats anchor their yachts at Porto Cervo, the resort area’s deep-water port. When I visited the Costa Smeralda in 1989, double occupancy rates at Cala di Volpe started at approximately $450 per night, per person. (Room tariffs include meals.) During the less hectic periods from mid-May to mid-June and from mid-September to mid-October, rates drop by 35 percent. The weather, which can be very hot in summer, is best for golf during the cooler shoulder seasons.

In any season, the Costa Smeralda, built with oodles of cash and a discriminating eye for authentic, original architecture, offers the most interesting slice of la dolce vita this side of a Fellini film.