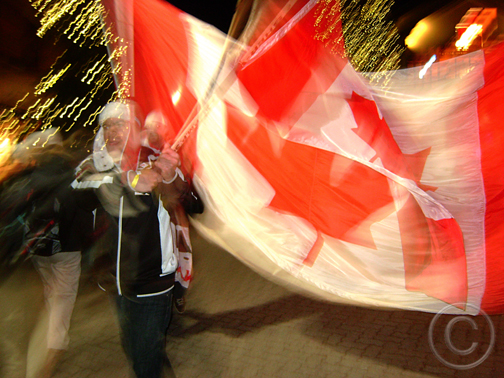 Nationalism is proud and loud at the XXI Winter Olympics. © Photo by Chris Duthie

THE THRILL AND AGONY OF THE OLYMPIC GAMES

The Olympics are all about big, heartfelt, wear-them-on-your-sleeve emotions, the kind that can soar like a Zeppelin dirigible — but are as devastatingly explosive when things go wrong.

The XXI Winter Games have been no exception.

Last Friday on opening day, the world’s athletic showcase started off as it never has — with death. Georgia luge team member Nodar Kumaritashvili, 21, died after a horrifying training-run crash at the Whistler Sliding Centre, sending the entire Olympic movement into spiraling grief and mourning. 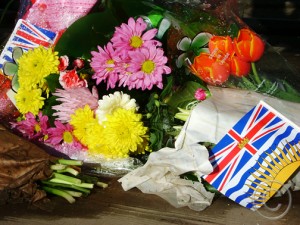 In memory. © Photo by Chris Duthie

In Whistler, Kumaritashvili ‘s untimely death shrouded the rain-glistened Village Stroll in gloom and sadness. Flowers, candles and handwritten notes began collecting at the base of the Olympic Rings display near Medals Plaza. Officials wept, competitors and coaches wore black armbands, flags were set at half mast.

The Olympics were off to a bitter, tragic start. Twenty-four hours later, following frenzied track renovations and a shortened starting point, the men’s luge event began with palpable fear, bated breath and private prayers — and went off with nary a hitch. Still, the usually boisterous celebrating and gleeful nationalism were noticeably absent. Few were willing, or able, to release the unbridled joy that marks, underscores and testifies to the Olympic experience. 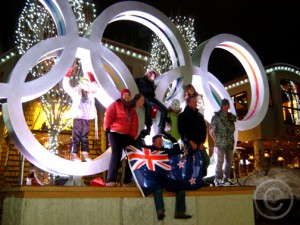 That is, until Sunday evening, when 22-year-old Canadian mogul skier Alexandre Bilodeau captured the men’s freestyle event at Cypress Mountain. Not only was it the host country’s first gold medal of these Games, it was the first ever won by a Canadian on home soil.

Turns out that Bilodeau was exactly what the Games needed. 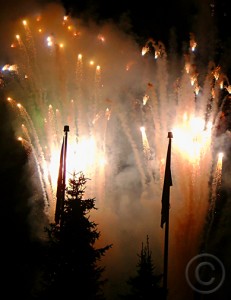 Canada and the world celebrate in Whistler. © Photo by Chris Duthie

Every day and night since, fans (especially proud Canadians) have packed Whistler Stroll and pedestrian-only Robson Street in Vancouver. Cowbells are clanging, national flags are billowing, street performers are entertaining, and those zealous Olympic fans are back and reveling well into the night.

Nodar Kumaritashvili’s flag-draped coffin was flown home to Georgia last Wednesday, and he will be buried tomorrow at a churchyard in his hometown of Bakuriani, a village of about 1,500. Like Canada’s Bilodeau, the young athlete is now regarded a national hero.

Such are the highs and lows of the Olympics. 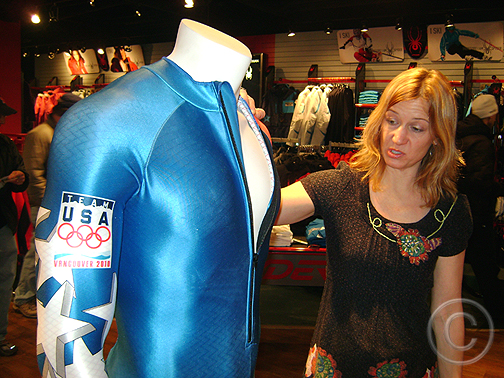 THE NEED FOR SPEED

Whistler residents, visitors and Olympic athletes woke to great news — and big noise — this morning: Almost ten inches of new snow have fallen in the last twenty-four hours, and Whistler Blackcomb’s crack avalanche safety crew has been busy bombing at-risk ski routes since daybreak. That, along with partially sunny skies, means the first day of the XI Winter Olympics is off to a rousing, vociferous boom. Ski jumping qualifications will be held today at the Whistler Olympic Park, and tonight are the highly anticipated Opening Ceremonies in Vancouver.

No doubt you’ve already heard about U.S. woman skier Lindsey Vonn’s now-infamous shin bruise, a week-old injury that might keep the two-time overall World Cup titlist from competing full speed in her quest for five Olympic medals. You also might have read the news of Georgia lugist Nodar Kumaritashvili, who died following a horrific training-run crash at the Whistler Sliding Centre, giving credence that the track — regarded the fastest in the world — might in fact be too fast. 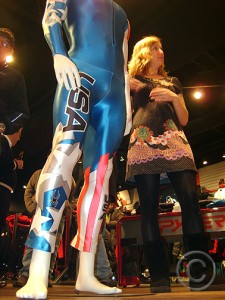 Spyder's new ski suit may have a dominating presence at the Games. © Photo by Chris Duthie

Here’s what may be the Olympic’s next big controversy: racing suits.

Remember the angry buzz awhile back over those slippery Speedo LZR Racer suits that helped propel swimmers to several world records? Something similar might be afoot here at the Winter Games. Spyder, the Boulder, Colo.-based skiwear manufacturer, says it has a new racing suit that will be a huge technological leg up for some Olympic athletes. 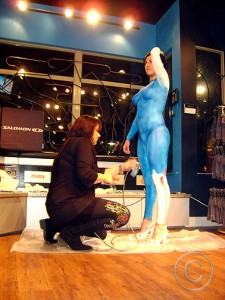 How slick is the new X-static, silver-coated fabric? According to Spyder Senior Marketing Manager Laura Wisner, it’s freaky fast. In a 100-second course, all other variables being equal, the time savings would be as much as one second. The new Olympic GS (for slalom and giant slalom) has up to eighteen-percent less aerodynamic drag than last year’s model, while the Olympic DH Suit (for downhill and super-g) lowers drag up to three percent. Both suits are seamless — eighty-percent of the stitching was eliminated when padding was removed or relocated — and the textile’s silver coating has significant anti-odor, antistatic and thermodynamic benefits.

All of which could translate into a real, techno-fueled gold rush at time-critical events.

But here’s the controversy kicker: Only U.S. and Canadian skiers will be wearing the wind tunnel-tested bodysuit (plus the sole member of the Jamaican Olympic Team, Errol Kerr, who competes in skiercross). Because of Spyder’s sponsorship commitments, we’ll only see athletes like America’s Vonn and Bode Miller and Canada’s Kelly McBroom and Manuel Osborne-Paradis exhibiting — and likely benefiting from — the flashy fabric.

In 2011 the suit is slated to retail for approximately US$1,200. The need for speed never comes cheap. [TAP] 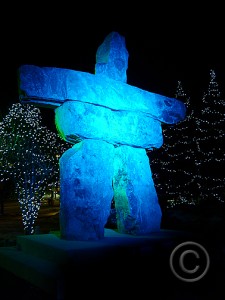 It’s three days before the start of the XXI Winter Olympics, and no matter how much the good folks at VANOC (Vancouver Olympic Committee) try to spin it, the buzz is about the weather. Or more specifically, the lack of it, as in, “Where the #$@! is the snow?” As I am writing this, Vancouver’s completely absurd daytime temperature hovers at 45-degrees Fahrenheit, which is ideal if you like trail running or mountain biking but abysmal if the day calls for skiing or snowboarding.

Vancouver’s unseasonably balmy weather has been a testy topic for weeks now. That wasn’t the case last season, when this coastal city was buried in freakish snowfall and its three nearby ski mountains—Seymour, Grouse and Cyprus—actually reported higher snow depths than Whistler Blackcomb, the much celebrated resort to the north and host site to most of the upcoming Olympic Alpine and Nordic events. 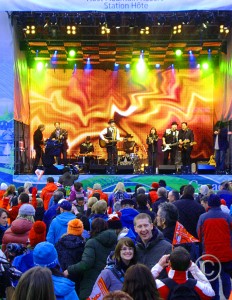 But at Cypress Mountain, located just 30 minutes from downtown Vancouver and site of the freestyle skiing and snowboarding events, event organizers are hauling in tons of the white stuff via truck and helicopter. It’s a superhuman, last-ditch effort that harkens back to the notorious, low-snow 1964 Innsbruck Games. That’s when the Austrian army saved the event’s high-profile fanny when it carved out 20,000 blocks of mountain ice for the luge and bobsled tracks, then carried 1.4 million cubic feet of snow to the Alpine ski slopes.

Despite Vancouver’s gloom, the telltale energy in Whistler Village is positive, palpable and downright infectious. Three nights ago, an Olympic Torch-carrying athlete ignited an on-site cauldron flame—much to the delight of thousands of toque-bedecked Canadians, who then punctuated the raucous, frosty breath night air with a reverberating chorus of  “Oh, Canada,” the national anthem. It was spine tingling, even for this crotchety, crowd-avoiding Coloradoan. Since, the pedestrian-friendly Village has swelled measurably with strapping young Olympians, fans, media and the occasional flag-draped canine. 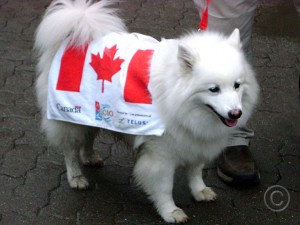 Skiing on Whistler Blackcomb is impressive, not so much for the excellent conditions and celebellum-numbing panoramas as for the nonexistent lift lines. What’s up? Olympic operations have shuttered all of the formerly free parking lots. Day skiers and boarders who normally drive up from metro Vancouver and Seattle apparently are staying away in droves.

Whistler’s stepped-up transportation system is incredible. A massive new fleet of hydrogen-powered busses are on five-minute-wait schedules, making private vehicle usage practically unnecessary. Frequent riders have purchased the CAN$38 souvenir monthly pass; others hop aboard and plunk in a CAN$2 “toonie” coin. It’s fast, efficient and a nice way to minimize my personal carbon footprint on this glorious mountain environment. 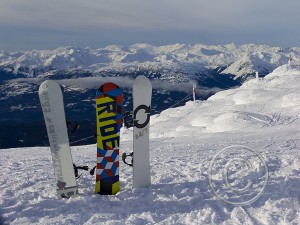 The heart-stopping Sea-to-Sky Highway is, if you can believe it, better than ever. What formerly was a white-knuckle, three-hour drive from Vancouver now takes little more than ninety minutes (when the road is dry and clear). That is, if you don’t stop every five minutes at the Nikon-prompting overlooks that showcase British Columbia’s famous fjords and glacier-encrusted mountains. [TAP]

All photography and writing contained herein is copyrighted by Chris Duthie (© Chris Duthie 2010). All rights reserved. This material may not be published, broadcast, rewritten, or redistributed without the permission of the author and owner, Chris Duthie.