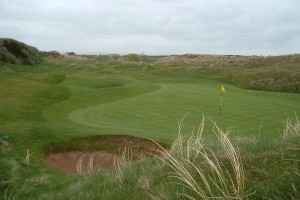 The greensite of one of my favorite holes at Western Gailes -- the long and downhill, par-3 7th.

Jerry Kessel has been Club Manager at Western Gailes GC for a little more than a year.  In that time, he’s seen the look on people’s faces when they come off the 18th green at Western Gailes a thousand times.  It’s all written there – the joy, the satisfaction, the exuberance.  Western Gailes is a course that inspires people from the first moment they round the corner of the clubhouse and set sight on this uniquely marvelous links golf course.  It’s a course – and a club – that stands out in many ways.  The exceedingly warm welcome that visitors receive is just one of them.

Today, our Golf Road Warriors group had the pleasure of playing with Jerry and two other members of Western Gailes.  After starting the round in showers, the skies cleared and so much sun came out that it actually started to feel hot.  THAT was a welcome change after four days here in Southwestern Scotland that were anything but.

Western Gailes is one of those courses that earns nods from links golf aficionados whenever its name is mentioned.  It hasn’t hosted an Open – it’s a bit too short for that.  But Open champions and wannabe champions come here to play all the time because this is a course that challenges you all the way around, and is as much a joy to look at as it is to play. 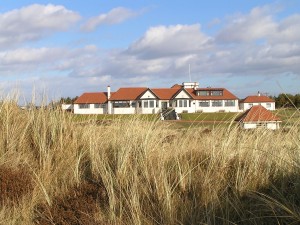 Western Gailes is a members' club, but visitors will receive a very warm welcome here.

Formed in 1897, Western Gailes has hosted a number of other prestigious tournaments, including the Scottish Amateur Championship, which returned for the eighth time to this Ayrshire course  in 2011; the 1972 Curtis Cup; the 1964 (Scottish) PGA Championship; and in 2007 the European Men’s Amateur Team Championship. The course has regularly been used for final qualifying when the Open is played at Turnberry or Royal Troon, and also as a final qualifying venue for the Seniors Open.

In June 1903, the great Harry Vardon arrived at Western Gailes celebrating his fourth Open victory to win the first professional championship held and promoted by the Club. In 1923, its attractions were also being lauded by the then U.S. Open Champion Gene Sarazen, who played the course with three other outstanding professionals of the day.

Western Gailes is a natural links course that’s not tricked up in any way.  Its undulating fairways, occasionally interrupted by three meandering burns, aren’t always visible in their entirety from the tee; you need to trust your caddie. Greens like that on the par-3 7th, located down in its natural seaside dell, are cleverly located in naturally folded ground, some protected by burns whilst others guarded by sand dunes. The course is currently ranked 35th in the Top 100 courses of the British Isles. 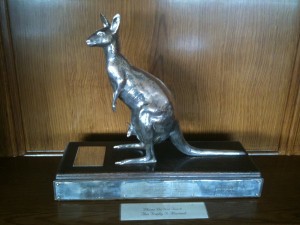 This large, solid silver trophy was given to Western Gailes by Gailes Golf Club in Queensland, Australia. Each year, it is the club's most coveted trophy to win (though the club keeps it).

The course’s superb natural setting is imposing, as it’s situated between the railway and the sea – both being very much in play.  At no point is the course layout more than two holes wide; you play four holes out to the right of the clubhouse, then the course turns and plays back along the sea for nine straight holes, then it turns again and you play the final five holes back to the clubhouse.  Any change in the strength or direction of the wind, which usually varies between southwesterly and northwesterly off the adjacent Firth of Clyde, provides new challenges. These challenges are compounded by the undulating terrain and finely contoured greens that are cleverly located and set in the folds of the surrounding sand dunes.

Thanks to the line of dunes running down the coastal stretch from the 5th to the 13th holes, the out-of-bounds wall from the 14th onwards, the plentiful supply of pot bunkers, plus the meandering burns, Western Gailes presents variety and a memorable challenge from beginning to end. And when you’re finished on the links, the Clubhouse sits proudly overlooking the course, with views across the bay to the Isle of Arran beyond. It’s the perfect setting to relax after the challenge of this famous and delightful course.

It’s not known who designed Western Gailes – at least by me.  Kessel mentioned that there is a name listed in the club’s centenary book, but the provenance is cluttered and to be honest, it doesn’t matter if it was designed by James Braid ( it wasn’t) or Brady James.   What you find at Western Gailes is an 18-hole thrill ride – one that I advise you to jump right on next time you’re in this part of Scotland.