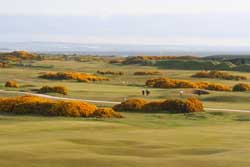 It’s taken them 260 years, but it looks like the Royal and Ancient Golf Club of St. Andrews may finally be warming up to the idea of having women (egads!) as club members. “Now is the time to ask members of the Royal and Ancient Golf Club to welcome female members into the club,” said Wilson Sibbett, chairman of the R&A’s general committee. A club spokesman added that “the club’s committees are strongly in favour of the rule change and are asking members to support it.”

R&A Secretary Peter Dawson said: “We’ve been talking about this for a while. And it is our governance role within the game that that is the driving force behind making this happen. Society is changing. Sport is changing. Golf is changing. And I think it is appropriate for a governing body to take this step.”

A two-thirds majority of club members is required for this new membership rule to be adopted.

Maybe. But you can expect there to be some acrimony surrounding the decision, if only in part because of the bifurcated nature of the R&A itself.

In 2004, the club carried out a reorganization plan that saw the golf club separate from, in Dawson’s words, the “governing body.” The Royal and Ancient Golf Club members voted then to create “The R&A,” thus distancing themselves from the entity that governs the rules for the game of golf outside the U.S. and Mexico. There were a lot of reasons for this, including the desire to separate club and board members from potential liabilities that might arise from issues related to the R&A’s rule-making or Open-hosting duties. But many members saw it as a power play. And since then, the “R&A” has reportedly all but usurped control of the club — and there are members who are decidedly not happy about it. I spoke with one club member who was practically seething as he described what has happened in the wake of this move, which he said had been orchestrated by Dawson. Many members who supported the bifurcation are quietly raging mad at what has happened in its wake, and it’s possible that those members and others may not like having this membership rule change being shoved down their throats. It may be totally “appropriate for a governing body to take this step,” as Dawson says — but will club members like having this decision force-fed to them in what looks like a move designed primarily to protect the brand image of the governing body? I wouldn’t bet my bonnet on it.

There’s no doubt that it would take a lot of heat off the R&A (the governing body, not the club) if women were allowed in as club members. And there’s no doubt that it’s the right thing to do. The R&A caught more flak than ever last year when the Open was held at Muirfield, one of just four Open-rota clubs that currently do not allow women members (along with the Royal and Ancient, Royal St. George’s and Royal Troon). This move could help mitigate against future criticism — but that criticism would undoubtedly still be voiced (and directed in part at the R&A) if they continue to stage Opens at Muirfield, St. George’s or Troon.

Dawson left that door open when he went on to say that “We are not out to set an example to other single-sex clubs or to put pressure on them.” And even though a Muirfield spokesman issued a statement the very next day saying that “a working group had been empowered to consult with the membership and to make recommendations to the board about our future,” that’s a far cry from saying that women will become members of the Honourable Company of Edinburgh Golfers anytime soon.

If you have the niggling feeling that these recent statements are just window-dressing, you’re not alone. But Dawson is no fool. He’d probably not have brought it up if he wasn’t confident that it would pass.

In September, when the club conducts its annual autumn meeting, we’ll find out what the R&A’s club members think. Will they go along with this recommendation? Or will they object to this latest move from Dawson and risk damaging the club’s image even further? It puts the club members in a difficult position, because even though they may wholeheartedly like the idea of becoming a dual-gender club, the means by which it’s being foisted upon them may be wholly objectionable.

In the end, ironically, this could wind up being a situation in which doing the right thing comes at the expense of the club members’ integrity, rather than being a move that illuminates it.