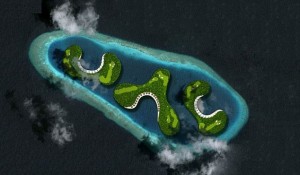 The course will be on three separate islands.

The Maldives, an archipelago of over 1000 islands in the Indian Ocean, are sinking. Not all of them, and not all at the same rate – but many are in danger of going underwater, and this has spawned a golf course concept that is among the most ambitious of all time: a floating golf course.

The Maldives, with an average height above sea level of just five feet, is the lowest country in the world. But its government thinks big. It recently entered into a joint venture with a Dutch company, Docklands International, to build the world’s largest series of floating islands, three of which will comprise the golf course. The Dutch firm has already built floating islands for prisons and housing 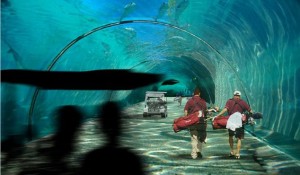 Players will travel from one island to the next underwater.

from slabs of concrete and polystyrene foam. Another Dutch company, Waterstudio, is in charge of the project design. In addition to the floating course and resort, plans call for 43 private islands, each with its own jetty for yachts, swimming pool, palm trees and all the rest.  There will even be separate islands created just for workers. 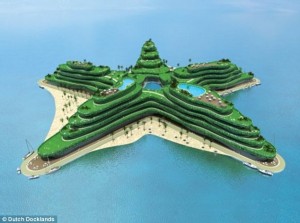 The course will be part of a larger resort, offering watersports and luxury accommodations.

The proposed floating islands will be anchored to the seabed using cables or telescopic mooring piles, making landforms that will be stable, even in heavy weather. The islands will be constructed in India or the Middle east to reduce costs, then towed to their final destination in the Maldives.

In addition to welcoming golfers, who will travel to the course’s three islands via underwater tunnels, the islands will be designed so that swimmers, divers and even private submarines can enter them from below. Visitors will be able to rent these private subs, which will be able to surface right in the middle of their housing units. 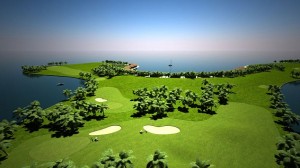 All 18 holes will offer views of the sea.

Dutch International CEO Paul van de Camp said that the project will be an exclusively green development in a marine-protected area. That’s one reason why it will be a series of smaller islands rather than one large one – to minimize the shadows on the seabed. The course will be powered by solar energy and the designers claim that the entire resort will be carbon-neutral. 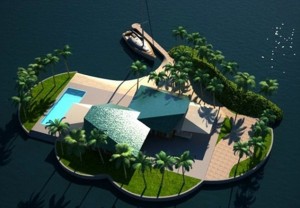 43 private islands will be for sale, each accessible from below by private submarine.

“This will be the first and only floating golf course in the world,” Mr. van de Camp said. “And it comes with spectacular ocean views on every hole. And then there’s the clubhouse – you get on an elevator and go underwater to get to it. It’s like being Captain Nemo down there.”

Development on the course is expected to begin later this year, and it is expected that course may be ready for play in late 2013, with the resort’s full launch in 2015.

The proposed site is just five miles from the capital of Male, giving golfers the opportunity to make quick trips to the “mainland” for dining and entertainment.