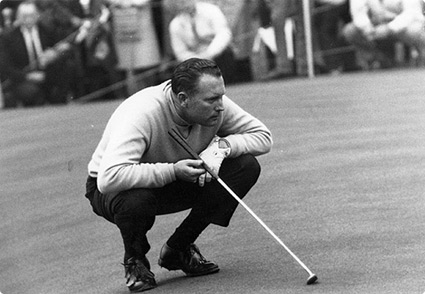 Billy Casper’s mentor in golf’s strategic arts stood just three strokes behind him going into that final round at Winged Foot in 1959. Ben Hogan, at age 46, had begun the week with a brilliant round of 69 that tied him for the lead. He was getting around as best he could on injury-ravaged legs and of all contenders would benefit most from a weather-induced change of schedule.

Severe storms had flooded the course and bumped Saturday’s second scheduled 18 holes into Sunday. Unaccustomed to re-pairing the field between rounds three and four, Open officials decided to stack the tee sheet by pulling names from a hat. The result was an array of odd gaps among the contenders. Bob Rosburg, who made up three strokes on Casper that day to lose by one, was a full hour and a half behind Casper as round four unfolded, and more than two hours behind Hogan.

Rosburg went out in a 1-over 36 then made a bold move early in his back nine. He holed a long bunker shot for birdie on the par-4 11th then sank a 50-foot birdie putt on the par-5 12th. He played the middle holes of the home nine in 1-over, due to a three-putt at 13, then lipped out a 30-foot birdie bid at 16, parring in from there to come up just short. There was a moment of doubt for Casper as he stood by a clubhouse window and watched Rosburg line up a 35-footer that would force a playoff if it fell. The putt never had enough on it, however, and stopped five feet short of the hole. Rosburg offset some of his frustration six weeks later by winning the PGA Championship at Minneapolis Country Club, but the events of that week in Mamaroneck left him shaking his head.

“I had my chance,” he reflects. “It was kind of a strange week, with the weather and all. I’d say the greatest thing about that Open was Billy’s play on No. 3—the fact that he never shot at the green. I still bring that up to him when I see him.” A check of hole-by-hole scoring shows that most of the contenders did manage pars on No. 3 throughout the week, but there is no telling whether Casper—had he done things differently—would have avoided the dreaded double-bogey. Sam Snead, starting play that afternoon only four shots back, suffered a final-round 5 at the third that seemed to be his undoing.

Mike Souchak, a former Winged Foot assistant who would tie for third with his former boss, Claude Harmon, believes the tactic would have ranked as a true oddity for any player other than Casper. “Billy laying up at the third all week—I kind of took it in stride. I never thought too much about it. He knew his own game so well and he knew just how to move his ball around the course. That, and his pitching and putting were so solid. Plus he had the temperament to stick with a plan.

This Open was undoubtedly the last in which the chances of victory by a current or former club employee were so close to being odds-on. Never out of contention until the very end, Harmon and Souchak carded their matching 284s by shooting 72-71-70-71 (Harmon) and 71-70-72-71 (Souchak). While in general they were models of consistency, Souchak’s front nine on Sunday was a blistering 31 that seemed to set him up for victory. The spell broke too soon, however, as bogeys on four of the last eight holes left him two strokes out of a playoff.

Jack Burke, the 1956 Masters winner, had recommended Souchak to Harmon and made possible a one-season apprenticeship in which the long-hitting Souchak was able to polish his technique extensively. “Taking that job at Winged Foot was the best thing I ever did for my golf,” Souchak recalls. “Claude watched me hold a club and said I had a ‘ham sandwich’ grip. Meaning, the most I would ever win playing with that grip was a ham sandwich. So he changed how I held the club, and he taught me a lot of finer points—especially how to play out of bunkers.”

Souchak received some additional mentoring—and a supplemental income source—from Tommy Armour, who at that time was a dues-paying Winged Foot member. “Tommy took me on as a playing partner,” recalls Souchak, and he would set up matches by saying to the other two guys: ‘Mike will assume all the winnings from this match and his partner will assume all the losses.’” Some of those winnings went toward the purchase of a brand new, yellow-and-blue Ford Fairlane from the car local car dealership owned by Harmon and Craig Wood.

Monday: Part 3 – Casper Closes it Out