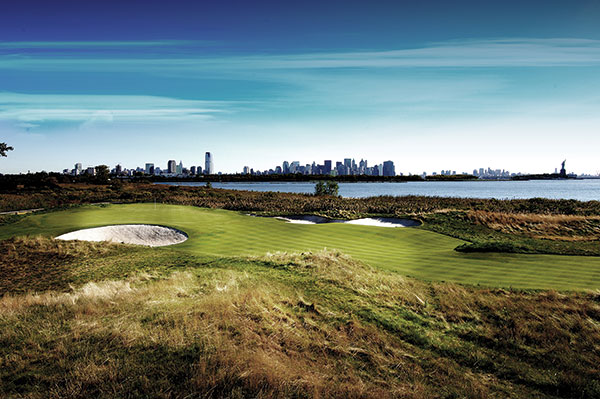 A thousand yards from Liberty National Golf Club stands the world’s most famous statue, mounted on a pedestal no one thinks much about. Equally as tall as Lady Liberty and 120 times as heavy, the pedestal was the largest concrete structure built in 19th-century America. To install it 53 feet below grade required two years of hard labor and tireless fundraising, at the end of which the giant torchbearer took her place.

When Dan Fireman winces at the eight years and the $250 million it took his family to build the Liberty National club, he should reflect on the statue-plus-pedestal nature of the challenge.

Dan and his father, Paul, founder and chairman of sneaker giant Reebok, had undertaken several golf developments in the past, but Liberty National came to them unbidden. The family’s private investment company happened to acquire a consulting business involved in the sale of an old refinery site on the Jersey City riverfront. On the site was a string of grimy warehouses belonging to oil companies interested in exiting their polluted grounds. Given how much remediation the parcel required, its next use had to be well chosen.

“The cleanup costs were high, and we needed something that would offset them,” recalls Dan Fireman. Pondering that question required multiple tours of the property, which was always a schizophrenic experience. “You would gaze out to the Hudson, to the Statue of Liberty, over to lower Manhattan, and that fired up your imagination every time,” Fireman says. “Then you would turn around and look at 12 old warehouses sitting on badly degraded land that needed a lot of work, and you had to try and hold onto your inspiration.”

A complete turnabout was ordered for the property—brownfields out, golf greens in. Architects Tom Kite and Bob Cupp, who had teamed up previously to design the Baltimore C.C. West Course in eastern Maryland, were handed the challenge of a lifetime. The Caven Point Road site was fairly compact and remediation procedures had to be factored in at every step. The architects produced almost 100 rough routings before getting all the stars to align. 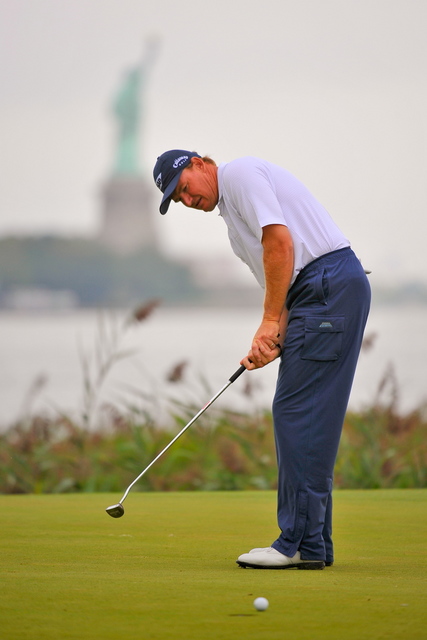 Ernie Els at The Barclays

The property’s unlikely emergence as a dream golf landscape was matched last June [2009] by Heath Slocum’s surprise victory in The Barclays, a PGA Tour event Liberty National hopes to host again in coming years. For 2010, The Barclays moves down to Ridgewood Country Club, with Slocum defending, but look for its return sometime soon to the Jersey City that will and inspiration built. Any future playing of the tournament at LNGC would mean a second crack at victory in Lady Liberty’s shadow for the likes of Padraig Harrington, Ernie Els, Steve Stricker and Tiger Woods. All four of these marquee golfers came within a single stroke of forcing Slocum into a playoff at nine under par.

The building of Liberty National started out as both an act of ecological redemption and a grab for urban glory. Then came the September 11 attacks on the World Trade Center, and the need for redemption of a much deeper sort. “The twin towers were a huge part of our visual experience in those early years,” recalls Fireman. “When 9/11 happened everyone stopped whatever they were doing, including Liberty National.”

The group regained its focus and returned to work. “Everyone involved, from Bob and Tom and down the line, felt a sense of responsibility to do our absolute best work,” says Fireman. “For a long time, a spotlight would be on this place.” By 2003 ground was broken for the golf course.

The image of the golf architect forming painterly thoughts as he surveys creek-laced meadows is foreign to the Liberty National design-and-build process. “The golf course had to be understood as the final step in a difficult site cleanup process,” recalls Fireman. “It wasn’t a job where you could do a lot of arm-waving.”

Fireman’s responsibility was to make room for the course architects to be creative and inspired, even amid all the technical requirements. “Every hole, every shot, is so well thought out,” says Fireman. “It makes an intense first impression but it also grows on you.” With such killer views to work with, overkill was a definite risk. “The views of the statue, the lower Manhattan skyline and of the Verrazano and Brooklyn Bridges are kind of fed to you at various intervals as you play,” says Fireman. “We could have made it Disneyland, and forced people to ooh and ahh constantly, but then it wouldn’t have been a great experience of golf.”

Meanwhile, the iconic views in the distance work to disrupt a player’s feel for carry and roll on his golf shots. “Minds and thoughts do tend to wander some when you’re looking at the New York skyline, the Verrazano, and the lady herself,” says architect Kite.

It cost $250 million to build this landmark course, plus $60 million for the clubhouse. Deep-pocketed golf lovers were summoned to the cause, including such founding members as Rudy Giuliani, New England Patriots owner Robert Kraft and Ken Langone, venture capitalist and co-founder of The Home Depot.

These titans were aware that a 160-acre, city-view site with more than 4,000 feet of waterfront had potential. They watched as the entire acreage was lined at its base with PVC and clay, to contain all groundwater, then entirely stripped of vegetation before truckload after truckload of specimen trees were planted. Many trees were placed so as to block views of the New Jersey Turnpike and an adjoining scrap yard. All other tree-planting was done so as to ensure minimal blockage of desired city, statue and bridge views

“We could have been done it for $50 million or $60 million less, that I can tell you,” says Fireman. “We overshot, we overdid it. And that bothers me at times, but what we built will last forever.” Likewise, the cleaning and capping process by which a brownfields course is built prohibits major revision. “We would have had no second chance at this,” Fireman points out.

The course’s irrigation system, one of the most complex ever built, has over 2,500 sprinkler heads. A maintenance crew of five or six covers the entire course daily, filling every divot on every fairway with a sand-seed mix.

As Tom Kite explains, the architectural plans for the course were so precise and exacting that little in the way of changes has been needed since Liberty National opened three years ago.

The 12th green was enlarged slightly to produce an additional hole location, to provide strategic flexibility. Also, a few grassing lines were altered either enlarging or reducing fairway and rough widths. Two or three grassy hollows were raised slightly, making them less penal. Kite expects scoring to be “relatively high, compared to other PGA Tour events.”

In preparation for the Barclay’s, the club’s small dining operation has to expand to a serving capacity of up to 2,000 meals a day to the VIP areas. To augment its kitchens, which are state-of-the-art but small, the club will set up a temporary tented kitchen area, with ovens, refrigeration and work areas installed.

The clubhouse at Liberty National, which opened last November, is a pleasure dome of private lounges, massage rooms and luxurious locker facilities, with concierge style service. Yacht and helicopter service to and from Liberty National is available from several locations in Manhattan. “We wanted a space that would be airy and contemporary, but with a golf clubhouse feel,” says Fireman. “It’s got strong, grand lines on the outside, but then you come inside and you are down to a human scale.”

It’s also got a mirror effect that few foresaw. “When the sun sets and the light from the west hits the city,” says Martel Meyer, the British-born general manager, “the entire glass façade of our building is filled with a reflection of Manhattan.”

The club was depicted as a citadel of wealth and power from the start but like any golf club it takes on the function of a familiar refuge. Meyer says the culinary program reflects that. “We walk a fine line between cutting edge and an almost at-home experience,” he says. “This area has so many great restaurants, on both sides of the river, we could spend all our efforts trying to compete and be ahead of the trends, but maybe that’s not the right thing.”

When Fireman Capital Partners conceived and built Liberty National, it had no inside track on a professional tour event, though hosting one still seemed a likely destiny. “We didn’t know we would host the PGA Tour,” said Fireman, in the weeks before the 2009 Barclays finally got underway, “but that’s what we built this course for. When the great players come through, you’ll see a new chapter in the club’s story.”