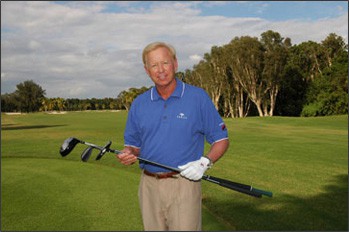 One of the marquee golf instructors of his generation, Jim McLean, got derailed by a speeding ticket on his way to a PGA Tour career

Tens of thousands of golfers have improved their skills and technique via the teaching and writings of the world-renowned instructor, Jim McLean. They might all be worse off in the swing department if a North Carolina patrolmen had shown a little mercy one warm evening 33 years ago.

The year was 1977 and the PGA Tour’s Qualifying School was being played at the Pinehurst Resort in the Carolina Sandhills. That era was known for its continual experimentation with Q School formats and policies, and ’77 was certainly a tinkered-with edition of the annual ordeal. Known as a marathon that would stretch out to six or even eight rounds in most years, the Q School of 1977 was a mere 72 holes—with a 36-hole cut, no less.

And so Day Two of that qualifier would find much of the field on the outs, including a contestant whose face would eventually work its way onto the covers of golf’s biggest magazines. Jim McLean, a University of Houston star on the title-winning team that also included Bruce Lietzke and Bill Rogers, prepared for the 1977 Q School with the care and precision that would come to mark the stellar teaching career Q School ’77 mercilessly consigned him to.

“In preparation for that Tour School, which was going to be held at Pinehurst, I worked closely with Ken Venturi for months,” McLean recalls “Kenny was and is a great teacher. Together we got my swing and my game into its top form. Well before the week of the tournament, I arranged with Jeff Burey, who was director of golf at the resort, to stay at his house during tournament week. Jeff was a friend and he had a beautiful house right on the golf course.”

McLean moved into Burey’s house and went about his business, hitting balls on the range and playing several practice rounds.

“I played my last practice round the day before the first round and shot a good score,” he says. “I remember taking my shower that afternoon and feeling so great about my preparation and thinking how under control everything was. All that was left to do was get my golf clothes at the cleaners and pick up some steaks at a market for the cookout we were going to have that night. The plan was to get the steaks grilling about sundown, eat dinner and get me into bed early.”

Driving into town in his silver Dodge Charger with red pinstripes, McLean reflected on his half-decade effort to become a tour player. The closest brush had been three years earlier, at the bizarre, two-venue Q School of 1974. He was whittled out of the inductee list that year by three shots, after playing 72 holes in San Francisco and then continuing on to Palm Springs for another 72. Rogers and Lietzke, whom he played even with all through college, were already on tour and successful. Their old teammate, whose swing was technically as good or better than theirs, should by all rights have been on the circuit with them already.

Walking out of the dry cleaner in the courtly Southern town’s center, McLean—primed and ready—would have been excused for showing a swagger of confidence. He hung his dry cleaning on the clothes hook of his Charger and motored the six blocks to the food market. He parked, went in, waited while the sirloin was wrapped then walked back out to his car. He had the door half-open when a large man in a white shirt intercepted him.

McLean was a decade or more removed from his mannerly upbringing in Seattle and still had the translucent blond hair and boyish looks that might persuade a small-town Carolina sheriff to put away his ticket pad. But there were New York plates on McLean’s coupe and, worse yet, a tinge of big-city attitude he had picked up while working as an assistant pro at the ritzy Westchester Country Club outside New York City.

“I had a radar detector in my Dodge, and I get the bright idea to tell the cop the radar detector hadn’t gone off, so how could he have caught me doing 60 in a 30,” says McLean, rolling his eyes at the thought of his own impertinence. “The cop says, ‘I was parked over on the shoulder and I estimated your speed.’ I’m hearing him say all this, and I’m holding my steaks and thinking about playing for my tour card with an early tee time the next morning, and I’m not believing it’s all really happening, so I look at him and I say, ‘Well, you know, that’s a bunch of bull.’

“Great negotiating, right? The next thing I know he’s telling me to put my stuff in the car and lock it up and we’re going to jail.”

Q School, the tour’s annual entrance exam, is grueling and merciless. It doesn’t require a night in a rural North Carolina jail with winos and hubcap-stealing delinquents to make it any tougher. But that’s where blue-eyed, innocent Jim McLean, the man who would one day be one of America’s most respected golf instructors, found himself. Four hours, one mistimed phone call to the Pinehurst golf shop (Burey was unavailable), a wee-hours wrangling about the $300 bail bond, and McLean somehow found himself on the tee.

“No dinner the night before, no sleep, and I shoot 77,” he says, reliving the galling events of that night. “The next day I have to drive back to the Southern Pines jail with a lawyer and take care of my paperwork. I make it to my afternoon tee time, play the round, shoot 73, and miss the cut by three shots.”

In keeping with the Tour School’s annals of frustration, McLean to this day feels a deeper grievance with the policies of the Tour than with those of the Pinehurst constabulatory. “They’re only playing 72 holes, in a tournament that’s always been known as an endurance test, and they make a cut. At 147. That was the rule that year, and everybody who was right around the number went crazy,” he remembers.

”We didn’t really think about it going in, but when it happened it was suddenly seemed so wrong. They were giving out 30 card ands the cut was down to like 50 guys. Ed Fiori, who made the cut barely, shot 66 the next day and got to about third place. They made a mistake and they knew it and they never did it again.

“But that was it for me. I was 26 and I said forget it. My teaching career began that day.”