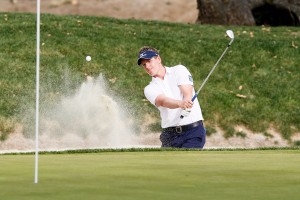 Luke Donald has a short game reminiscent of Tom Kite, and his record through age 33 is similar, too. Copyright Icon SMI.

Once upon a time, Tom Kite blazed a trail of top-10s on the PGA Tour. He didn’t win a lot, especially early in his career, but you could usually count on him being somewhere near the top.

Kite set the standard for consistency in 1981 when he finished in the top 10 in 21 of the 26 events he entered. He was only able to win one tournament, but still walked away with the money title.

Luke Donald is having a similar year in 2011, but he’s already doing better in breaking the win barrier, with two victories by the end of May if you count Sunday’s BMW PGA Championship on the European Tour (and why wouldn’t you, considering that it’s Europe’s flagship event and had a stronger field than the PGA Tour’s HP Byron Nelson Classic?) It was his ninth top-10 finish in 10 starts this year, and his ninth in a row.

It’s a run that has lifted Donald to the No. 1 spot in the world ranking, an honor that is especially deserved because he did it by taking down the previous No. 1, Lee Westwood, in a playoff at the BMW PGA.

Donald is now 33 years and 5 months old. It’s amazing how similar his record is to Kite’s at the same age. Here’s how the two stack up through that point in their careers (both were born in December, so we’re looking at Kite’s career through May 1983):

Kite finished in the top 10 more often, but otherwise Donald has virtually matched him through age 33. Even going back into their amateur days, both won an NCAA Championship, Kite at Texas and Donald at Northwestern. Donald is the same size as Kite—a slightly built 5-foot-9—and plays a similar game.

Kite was a short hitter—not Calvin Peete short, and capable of sneaking one out there pretty far on firm fairways, but notably shorter than average. He was straight of the tee, though not quite Calvin Peete straight. His strengths were his wedge game and his putter.

Donald is a short hitter, though not quite the shortest, generally ranking about 160th in driving distance out of about 190 ranked players. He began his career as a fairly straight hitter before losing his way off the tee in recent years. He has straightened himself out pretty well in 2011, ranking 33rd in driving accuracy. But his strengths are his wedge game and his putter.

Both earned the label as players who haven’t won as much as they should have. The term “Luke Donald disease” was coined for a player who piled up the money earnings without winning much, but three decades ago it would have been called “Tom Kite disease.”

The truth is that consistency and winning don’t necessarily go together, unless you’re at the stratospheric level of Jack Nicklaus or Tiger Woods. To win tournaments, it’s better to have some volatility in your game. It’s also better to be a long hitter, effectively reducing par by being able to go for par fives in two and, these days, par fours in one. The grind-it-out players have fewer lows, but their highs aren’t as high, either.

Not to say that Kite in his day or Donald in the past decade haven’t missed some victory opportunities. But their relatively slight victory totals have more to do with their size and style of play than with any lack of intestinal fortitude.

Kite took until age 33 to notch his first runner-up finish in a major, the 1983 Masters. Donald hasn’t done that yet, but he has four top-5s in majors and shared the 54-hole lead at the 2006 PGA Championship. It took Kite nine more long years before he finally notched his first major at the 1992 U.S. Open at age 42.

Donald hopes it doesn’t take him that long. But he can take some encouragement from the fact that Kite found his way to the winner’s circle more often in the latter part of his career. He won multiple events in a season for the first time at 34 and finished his PGA Tour career with 19 wins (and 29 runner-up finishes).

Which means that while Donald’s career has been pretty similar so far, he’s got a long way to go before he builds a Hall of Fame resume like Kite. The way he’s playing so far in 2011, Donald at least has a chance to get there.