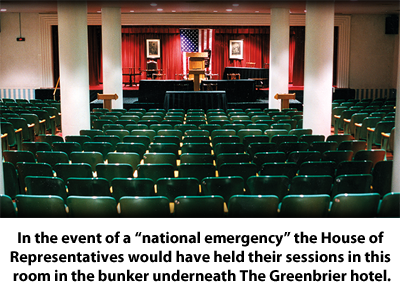 From 1958 to 1992 it was a well-kept secret but even now when guided tours pass visitors through the 25-ton blast proof doors there is an aura of mystery about the bunker underneath the Greenbrier hotel. During a recent trip to The Greenbrier, “America’s Resort” and premier golf destination in the West Virginia mountains, I had the opportunity to satisfy my curiosity and learn the background on the underground hide away.

The bunker is more than two football fields in size at over 110,000 square feet and was built beginning in December 1958. Finished three years later specifically with the purpose of providing a location for Congress to continue doing business if there was a “national emergency.”

This of course was a euphemism for a nuclear attack by the USSR and begs the question of how member of the House of Representatives and Senate would be able to get out of the nation’s capital if intercontinental ballistic missiles with nuclear warheads were on the way. But one has to understand it was a different time, it was the Cold War, when children were being taught in classrooms to “duck and cover” under their desks in the event of a missile attack and the U.S. kept thousands of nuclear warheads at the ready.

And there were at least three other secret bunker facilities around the country to house the Executive Branch and the Supreme Court plus military leaders. 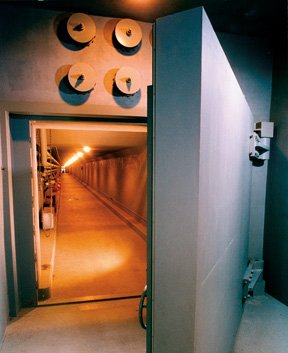 ce but that was the idea, hiding in plain sight. Press announcements by The Greenbrier described the project as an addition to the hotel, the so-called West Virginia Wing and the huge area being dug as part of the construction project adding additional rooms. In effect construction of the bunker and the hotel went on at the same time with many of the bunker features such as fuel and water storage tanks, massive electrical generators and miles of piping passed off simply as necessary for a modern guest facility.

The deception of course could not stop with completion since dozens of technicians were needed to keep the secure facility in readiness not to mention man the then state-of-the-art communications systems installed. Nothing says more about the mood of the country and particularly the way the media looked at the project than the cover story for these resident workers. They were said to be audio/visual support specialists for The Greenbrier, in effect, TV repairmen.

In addition to the rooms meant as substitutes for the House of Representatives and Senate chambers there was living space consisting of 18 dormitories behind the four massive entrance doors plus a cafeteria, medical clinic, decontamination chambers and everything else Congress would need for an extended stay.

The bunker was maintained as one of America’s frontline facilities in the event of catastrophe until 1995 though the secret of its existence was revealed in an article published by Washington Post in 1992 and the government began the process of decommissioning.

Today though open to tourists the majority of the space is used for secure records storage and not open to the public.