You can pardon a clubmaker boasting a little when for 10 years they have made one of the game’s most popular putters and in recent times, consistently week to week the most played single model on the PGA Tour. TaylorMade Golf may have been pushed from the top metal wood sales spot by Callaway and have unfulfilled plans to carve out a bigger chunk of the Pro V1 market share from Titleist with the TP5, but by any standard the Spider putter and its descendants most notably the Spider Tour has been a smashing success.

Bill Price, TMaG’s Senior Director for Product Creation, Putters & Wedges expressed it well, “When we first introduced the original Spider putter in 2008, we never could have anticipated the global phenomenon it has become. With widespread adoption on tours around the world, not only has it become one of the company’s top-selling putters of all time, it has truly shifted the paradigm of putter design toward high-MOI mallets. I’m proud to have played a role in the evolution of Spider and what it has become today.”

The new Spider X follows the basic ideas that made all the Spider models so effective. Extremely high resistance to twisting coupled with a Pure Roll insert face TaylorMade pioneered that gives excellent distance control–the key to making more putts. The weights in the rear have been more integrated to the body with a more streamlined shape. The original weights used in the Spider models were from the R7 driver back in 2006 and now have been replaced with three choices: 2-gram aluminum, 6-gram steel or 12-gram tungsten. 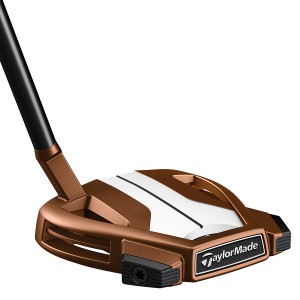 Design of the new Spider X was done in conjunction with the Vision Sports division at Indiana University and augments the single alignment line of the old Spider Tour with a rather bold strip half the width of the ball. According to the research this is the best for an improved path, clearer vision and better perception due to the contrasting white color. 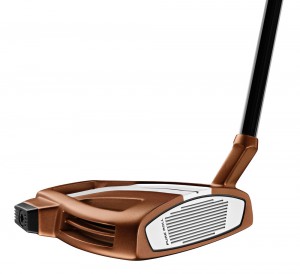 Need to Know: Extensive testing, more than 12,000 12-foot putts, showed 66% of the time golfers hit the ball so the weight distribution of the Spider X which with the new visual alignment ques got more putts in the center of the face. The Surlyn face insert itself, called Pure Roll, is 2 mm thicker at 5 mm and with the grooves cut deeper to give more “grip” to the ball. Since the face slightly deforms at contact top spin is more readily imparted. The more stable head shape provides more weight on the outside of the frame (36% on both perimeters v. 30%). The CG is deeper center (37 mm) or three times deeper than a traditional blade putter. Head is 5% smaller but with heavier steel frame and a very lightweight composite core of only 15-grams compared with 70-grams in the Spider Tour.