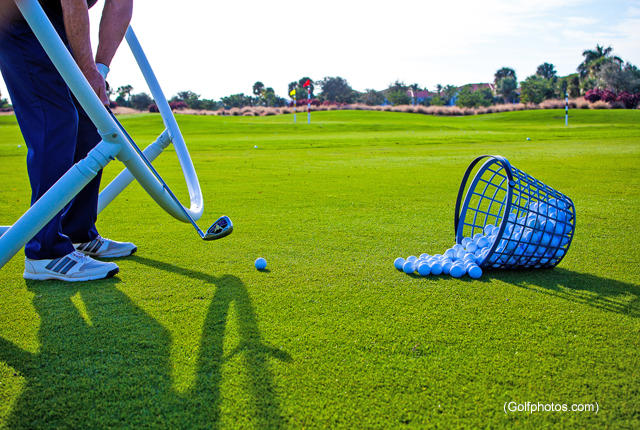 Those of us who play golf for the fun of it sometimes wish we could use our Visa card to fix our game not to mention filling in any gaps due to a deficit of talent.

Rather than beating balls on the range or spending hours on the putting green it would be a lot easier to “buy a game.” Just stop in the local golf shop and pick up the latest and greatest carbon-titanium-steel-graphite driver or plumber’s neck-mini-mallet-blade putter. The only problem then becomes keeping the secret from the brother-in-law so Saturday’s $10 Nassau would be a sure thing.

Ideally, our clubs should help rather than hurt our chances of scoring somewhere near our potential. Unfortunately, as with a lot of things, the real-world intervenes and it’s not just the time constraints of our busy lives that clearly puts the task of evaluating clubs in the “unsuited for the uninitiated” category. There is also the feeling one may need a PhD to figure out all the esoteric and often mysterious differences in clubs which assuredly shoves the solution way beyond those of us in the deskbound office brigade.

Let me tell you a story to prove the point.

Living in Florida where 75 million annually vacation provides lots of opportunity to golf with a cross section of fellow strugglers and one afternoon the starter matched me up with a typical husband and wife escaping from the bleakness of a Midwestern winter.

Both were experienced players and the wife, back into the game after a hiatus to raise a couple of kids, teed it up regularly with a group of “girls” at the club back home. Her husband, the quintessential mid-level executive weekend warrior, had a pronounced left to right ball flight which probably meant his favorite courses were not ones with trees lining the left side of the fairway. They were nice people and enjoyable companions for the few hours it takes for this maddening game.

While waiting on the par-3 third hole husband noted my bag had clubs from seven different manufacturers and asked, “What’s that all about?”

The simple explanation was seven manufacturers because the company who made the longest-straightest driver for my swing did not have an iron model that produced the best distance and control. Similar computerized shot analysis sessions put two other wedge brands, a fifth company’s fairway wood and a sixth’s hybrid in my bag. The choice of putter, from still another manufacturer, had been the computer’s second selection since the first choice was distinctly unappealing; in fact if you can picture an ungainly lump on the end of a shaft you would have the idea. Given my decades of playing and writing about the game the importance of custom clubs was beyond question as was the need to reevaluate specifications every couple of years.

The critical point is as we age our swing changes, especially the speed we can generate, and that necessitates changes in our clubs. In my case I now walk right past the “tips” heading for two tees forward and depending on how the body is feeling on any given day, maybe three. This isn’t a complaint simply a realistic assessment by a someone who can no longer play at the level to which he was accustom.

Getting back to our friends and the husband’s question, he told me that back home only a few of his buddies had been through a fitting (most likely the ones worried about that $10 brother-in-law Nassau) but he readily understood the idea of carrying clubs to help not hurt his game.

At the end of the round we exchanged business cards and promised to stay in touch, but in my mind I’d let a week or so go by and then send an email prompting him about a club fitting appointment.

The temptation was also there to mention how much more his wife would enjoy playing with him if he didn’t offer advice and tips after each swing but then having travelled that particular road myself I figured he could learn to navigate the potholes himself.

Interestingly, while husband was off in the palmettos attempting a recovery from another boomerang-shaped drive, his wife she asked if a fitting would make sense for her. Though we had played only a few holes it was apparent with her basic swing and better than average short game she had the potential to score much lower. After surveying her bag, it was obvious a fitting would help.

Out of curiosity I inquired where she had gotten the stiff shafted irons and steel headed driver, but the reply did not surprise me. When she started playing again husband came home with this bunch of beauties and a, “Here honey, play with these.” He must have gotten a heck of a deal but at least the bag and headcovers were a matching mauve.

This is important. Do not let a friend dictate or even gently steer you toward something they like. The corollary of course is trying your buddy’s new driver and absolutely striping it one time does not mean you’ve found the answer to the maiden’s prayer. Do not stop on the way home to get one just like it ‘cause chances are that one driver swing was the golf gremlins messin’ with you.

Also be cautious of being fit by someone who sells a single brand or a limited number of brands. The truth is even the most knowledgeable best-intentioned fitter can only fit you to the driver or irons for which he has samples. You will never get the chance to try the perfect club if it is not in the shop.

But getting back to the story, a couple of weeks later the husband sent an email saying he had been to the fitting and how surprised he was the club specs had changed starting with a swing weight. Rather than the graphite shafted ultra-lights he had been playing his new clubs were a heavier D-3 swing weight and the driver had a strong draw bias to help straighten out his slice.

His excitement was evident. Another Florida visit had been planned but the timing coincided with the PGA Merchandise Show, so I missed seeing him however a few days after the Show another email arrived.

This one was from the wife, and she was over the moon, writing she had been fitted for clubs as well and also made the trip south. Both of them were happy with the “instant” improvement—hitting the ball farther and straighter. Best of all, she confided, there’s no doubt in her mind she can take her husband on in a $10 Nassau straight up.

Funny how things work out.