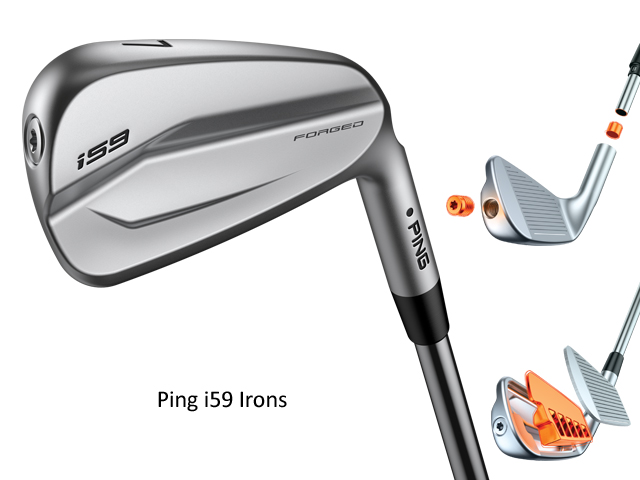 Ping has announced their newest irons in the better-player category, the i59 model, featuring a forged body and face, aluminum insert, milled grooves plus toe and hosel weighting.

WYNTK
Ping has again moved the bar higher for better player irons with the introduction of the i59s that not only look great but have some interesting features led by the use of an aluminum insert between the forged body and face.

This insert called AlumiCore Technology, unlike foam inserts used by other makers, is aerospace aluminum and being lighter than steel let Ping engineers move 30 grams of weight from the middle of the club. This weight was switched to the hosel and toe measurably raising the resistance to twisting at impact or MOI for more forgiveness, something even the best players appreciate.

“There’s been a lot of anticipation for the i59 iron since we took them out on tour a few months ago, so we’re very excited to bring them to golfers around the world,” said John K. Solheim, PING President. “It’s a true forged blade on the outside, but inside it’s like nothing ever engineered in golf equipment. Our team took on the challenge of disrupting an iron category that traditionally has lacked a lot of performance innovation and they developed an iron unlike any other. The combination of the look, feel and forgiveness ‘when you need it’ sets it apart from anything else in the industry. Once golfers hit it, they’ll be pleasantly surprised by its versatility. The i59 will clearly appeal to better golfers but the combination of forgiveness and clean appearance will attract golfers of all skill levels.”

Of note is Ping’s commitment to quality. Each i59 is inspection individually at several points in the manufacturing process such as forging, face machining and sole shaping.