Cleveland’s new version of the venerable 588 wedge is the 588 RTX CB featuring a face with 16% larger U-grooves than least year’s Tour Zip configuration and a laser-milled face. Tabbed “Rotex” by the company the face milling lines are in an arced pattern superimposed with milled lines parallel to the leading edge to produce maximum “bite” and control. 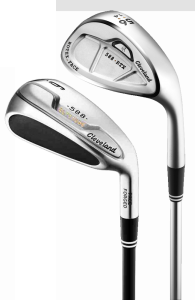 The CB stands for cavity back which allowed weight to be moved to the perimeter increasing forgiveness. The 588 RTX CB also has a sole with lots of relief towards the toe and heel similar to that found on their popular CG14 and CG16 wedges. Shops will have them by the middle of November for $199.99.

Cleveland also announced new game-improvement model addition to the 588 iron family that already included the 588 Forged CB and 588 Forged MB players’ irons. The new iron is the 588 Altitude, a blended hybrid-iron set with forged face inserts made for use by recreational golfers.

The 588 Altitude (set is comprised from 4-iron through D-wedge) have a hollow construction to help less accomplished players get the ball airborne more easily and still provide good distance even when the ball is not struck exactly on the sweet spot. Priced at $699 (steel shafts) and $799 (graphite shafts), they will also be in shops in mid-November.