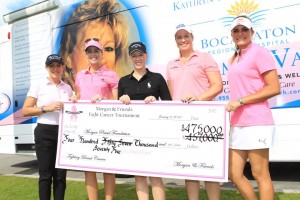 Pressel, who lost her 43-year-old mother to the disease in 2003 (when the golfer was just 15), hosted the tournament, as she has for five years, in memory of Kathy Krickstein Pressel. The funds support patient care and research at the Boca Raton Regional Hospital, University of Miami Sylvester Cancer Center, and Hospice By the Sea. With money collected in previous years, the Boca Raton (Fla.) Community Hospital purchased the Kathryn Krickstein Pressel Mammovan, a mobile early-detection van named for Pressel’s mother. The vehicle travels the region, helping women obtain affordable mammograms.

With her mother, aunt, and godmother all diagnosed with breast cancer, Kerr is just as passionate about finding a cure as Pressel. Her Birdies for Breast Cancer organization has itself raised more than $2 million for breast cancer research and treatment.

“It’s amazing what we have created in such a short time with just golf, and how remarkable it is that the game can bring large groups of people together who all have one goal in mind — to raise money to help a good cause,” the two golfers penned in a November article published in USA Today. “The two of us were moved to act when our lives were torn apart because of breast cancer, and we both felt we needed to do something to help other women, and men, who unfortunately deal with this horrible disease.”

The women were not satisfied “just sitting idly by and just giving time here and there,” they said. “We both dove right in and we now work as hard as we can and make as much of a difference as we can.”

Adding that both planned to continue their efforts long after their LPGA careers ended, the two thanked all those who have supported their work.

“It is a sense of loss like no other,” Pressel and Kerr said. “And we want to do everything we can so others don’t have that same feeling.”