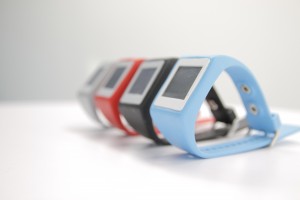 Wristwatch-sized "bandu" can tell you what parts of your golf game stress you out the most (Photo: Robert Goldberg)

Cambridge, Mass. — When legendary PGA Tour loose cannon Ken Green came undone during a long-ago tournament, he planted the seeds of an idea that blossomed into a device to help future golfers cope with stresses similar to those that likely contributed to his own outburst.

Robert Goldberg is a neuroscientist who recently left his position as a visiting scientist at MIT to develop technology designed to aid people suffering from the pressures of their daily lives. As a 12-year-old standard-bearer at the Greater Hartford Open (the forerunner to today’s Travelers Championship), Goldberg was assigned to Green’s group.

“Ken lost control that day and he got really angry,” Goldberg recalled about the New England golfer’s tantrum.

Green was so unhappy with his performance that he gave his balky Ping putter to the youthful volunteer, on whom the incident left an indelible mark.

Fast forward several years and Goldberg is co-founder of a start-up company, Neumitra, whose mission is to turn established science into portable technologies that can help the 40 million Americans afflicted with clinical anxiety disorders. The firm’s first product is a wristwatch-sized mechanism that monitors a person’s stress levels by emitting electrical charges into the sweat glands on the wrist. The “bandu” captures and sends the data via Bluetooth to an iPhone application, which alerts the user to slow down or relax by listening to music, stretching, or meditating.

While the incident in Hartford had an impact on Goldberg, Green was hardly the only professional golfer to suffer links-related anxiety. Phil Mickelson cited mental fatigue as the reason for his withdrawal from June’s Memorial tournament. A severe panic attack that sent him to the hospital nearly scuttled Charlie Beljan’s eventual tour win at last month’s Disney event. Two years of “cancerous thoughts” almost drove Stuart Appleby, a contender in last week’s Australian Open, completely out of the game.

These days, golf fitness encompasses far more than six-pack abs and chiseled biceps — something to which LPGA Tour superstar Yani Tseng can attest. The superstar, who last year, at age 22, became the youngest player ever to win five major championships and dominated all of golf, entered 2012 burdened by internal and external expectations that resulted in only one top-10 finish between May and October. Tseng earned a third-place finish at the HanaBank Championship after an emergency session with coach Gary Gilchrist that focused, she said, “mostly on the mental part.”

MIT golf coach Jesse Struebing wholeheartedly subscribes to the theory that golfers’ psyches play significant roles in their achievements and enthusiastically offered to help Goldberg test the stress-indicator. He enlisted the assistance of two of his players, a low-handicapper and another who was far less skilled.

Out on the course, it was not a jolt for Jon Warneke, one of the team’s top golfers, to learn that the appliance indicated a placid temperament as he swung a club and an even calmer disposition as he placed his ball on the green. What caught the attention of the sophomore from New Hampshire with a 2-handicap was how his stress level spiked as he putted.

The data indicated that, on the green, Warneke was calm as he followed his usual routine of reading the putt line, marking the ball, lining it up, and making a couple of practice strokes. It was when he readied his stroke that his underlying apprehension increased, he told us by phone on Monday.

“Mentally, I was thinking, ‘Man, I’d like to make this putt,’” said Warneke, who conceded that putting was the weakest part of his game and has since begun taking deep breaths before hitting putts.

Goldberg, who plans to market the device in 2014, explained that the unit considers temperature and motion — factors that inform each round of golf — into its results as well. He hoped that, after instructors and golfers themselves determined what caused their yips and other anxiety-provoking phenomena, they could come up with workable remedies.

Warneke believes golfers would eagerly add the gadget to their arsenals of training tools.

“This has legitimate promise [for beginners or high-strung professionals],” said Warneke, who studies math and physics. “Realizing when you get stressed would be very helpful and I think that pros will be able to come up with drills or exercises you can do to reduce stress.”

Goldberg has fielded inquiries from several golf professionals, and at least one tutor focused on the game’s psychological aspects expressed curiosity in the instrument.

“This sounds amazing and something I would be very interested in,” Julie Elion, a Bethesda, Md.-based mental coach who has worked with Mickelson and several others on tour, told us via e-mail.

Results of my own stress-test exercise — “cool, calm, and collected,” Struebing interpreted (after the initial, and inevitable, spike from social anxiety-induced tension) — affirmed that the Yoga breathing I practice to compose myself in particularly dicey situations seemed to work. (At least it did within the cozy, climate-controlled confines of MIT’s indoor golf center.)

While Goldberg endorsed deep breathing as a proven panic control, golfers may require more esoteric elixirs, and his device will reinforce what solutions work and what do not. The golf team’s neophyte player, for example, responded to more aggressive encouragement from Struebing to settle his nerves and boost his confidence. The results were almost instantaneous.

A golf application for the device seemed a natural commercial fit for Goldberg and his Neumitra collaborators, Anand Yadav and Safiyy Momen. The pioneers, however, have a broader aim in mind.

“Our focus is on building great technology. [Golf] is one potential application,” said Goldberg. “The goal is technology that can change people’s lives.”

The device — in which Yahoo! co-founder and chief executive (and anxious putter) Jerry Yang holds a stake as an early investor — will undergo beta testing in January and may eventually sell for some $250, according to Goldberg.