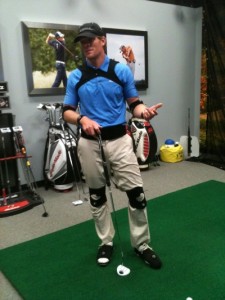 BOLTON, Mass. — James Driscoll plans to join the belly-bat brigade next season. But that doesn’t mean the Boston native who’s 125th on the PGA Tour money list heading into this week’s Disney tourney has to like it.
“Why wouldn’t you switch to this?” Driscoll said of the long putter he tested with almost 100 percent accuracy from some 20 feet during a stint Monday at The International Golf Club & Resort’s TaylorMade Performance Center. “I think it should be banned.”
A purist as far as the flat stick is concerned, Driscoll believes the longer models eliminate “the art of putting.” But as long as they’re legal, the 34-year-old Boston native won’t be left behind by the hordes of pro golfers tinkering with sticks that Bridgestone Invitational winner Adam Scott, PGA champ Keegan Bradley, and money-title leader Webb Simpson have used with such success.
“It’s not just people looking for a cure for their bad putting,” Driscoll said. “Good putters are going to it too — [Jim] Furyk, [Phil] Mickelson. It’s clearly an easier, better way to putt.”
Driscoll has fiddled with belly putters from TaylorMade and Odyssey but holds them in such low esteem that he could not recall the model names or their specific features.
“To me, putting is about controlling your nerves and there’s a certain art to it,” he said. “[Anchoring something against your body] eliminates a lot of that. I think it’s a shame.”
Driscoll likened the use of long putters to employing verboten practice tools during a competitive round, which LPGA Tour star Juli Inkster certainly knows is a definite no-no.
“It’s like me playing a round with a golf glove under my right elbow as a training device,” he said.
Despite his obvious scorn for the belly and chest putters, Driscoll estimates that more than half of the pros on tour are at least toying with them. He believes that puts him at a competitive disadvantage and he’ll take some time during the off-season to become familiar with a club he believes should be illegal.
So why not add the hammer to his bag now, since he’ll be playing this week for his 2012 tour card? The former amateur all-star and Nationwide Tour winner said he wanted some time to gain confidence with the new baton before debuting it in competition.
“Adam Scott practiced for months with his before he put it into play,” Driscoll noted.
Despite the mass migration to what are quickly becoming conventional blades, Driscoll believes one golfer fans will never see with one is Tiger Woods.
“He was giving me a hard time for practicing with it a couple of weeks ago,” said Driscoll, who shares Woods’ swing coach, Sean Foley, and is a long-time member of Woods’ new course, Medalist Golf Club in Hobe Sound, Fla. “He said he’d never go to the long putter. He has tried it and says he just can’t stroke it.”
While Driscoll believes a longer putter can help improve his short game (he was 122nd on tour in strokes gained-putting prior to this week’s event), he understood Woods’ sentiments.
“It’s not what golf should look like,” he said. “It’s just not cool.”