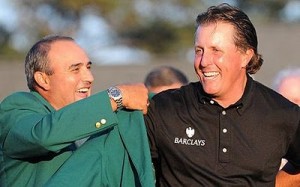 I love watching the 2010 Masters.  Even better this year was after Phil Mickelson had won.  While many folks who watch golf just move on, I flip over to the Golf Channel.  Why?  Because they carry the complete interviews of the players live.  The thing about Phil Mickelson and his interviews following rounds at the Majors like the Masters is how accessible his thoughts are about his game and his competitors.

Now before I show you an example there’s a couple things about Phil that I find completely amazing in his interviews.  First, without notes or prompting he can recite what he did on every hole.  And he can do it with incredible clarity and depth.  He remembers the yardages of every approach shot and the length of every put.  .  He can also describe exactly what type of shot he was trying to hit and what was the outcome of his golf shot.  Of course he does this with a modesty and graciousness that Tiger Woods won’t be able to show in this lifetime.

So now for an example.  Here’s the interview of Phil after his Masters victory.  Just click on ‘Interviews’ and then select the one of Phil.  I love watching the whole thing but you can just watch the last couple minutes to see the display of golf knowledge.  What I find so amazing is that I can barely remember more than one or two shots after I’ve completed a round.  Now that’s just me.

The other thing about Phil is something that I’ve noticed from great CEOs in the board meetings I’ve been in.  They have all of the information in their heads and rarely need notes to be able to describe the business in depth.  They are capable of not only reciting information but putting it into context in several dimensions.  Phil does this during the interview about his Masters victory when he talks about playing the middle holes of the course.  He knows what every one of his competitors are doing on each hole as he’s playing and can recite that information in detail after the round.  And what that means for the group of his competitors, the play of Augusta, and his game.  It’s a masterful display of knowing your business.

So what about me?  Well as a start towards trying to remember I’ve started breaking down my round by drives, irons, chips, and putting.  It’s a good start and it also forces me to write down my strokes as I go along.  Which is important because I don’t have to try and remember all of the shots I’ve taken.  Until most of my scores are either 3,4, or 5 like Phil, this makes a lot of sense.  It also helps me to focus on the area of my game that needs the most help afterwards.

But I’m on the war path for a better scoring system.

By the way, here’s a great shot of Phil and his while they are picking up donuts after his Masters victory.  His daughter is wearing his green jacket.  And here’s another about Phil’s great shot out of the pine needles on the 13th hole that effectively closed out the tournament for him.  If you listen to the interview listening to him recall it is hilarious.