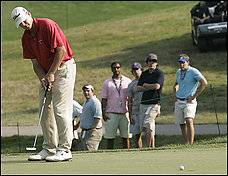 Putting games have become a necessity for me to keep my interest around a putting green.  I know that putter skills are a major key to reaching my goal of playing bogey golf.  While I’d prefer to just pull out my TaylorMade driver and pound a bucket of balls on the driving range, I know that my skill with my putter is really going to be the difference maker.  But when I look at a putting green it just doesn’t seem like all that much fun.  Oh, I’ve heard the stories of kids who grew up honing their putting by playing games by the hours (Steve Stricker, pictured at left, must have been one of them). I must have been in the wrong family.  So I’ve resolved to make my time around the green more engaging and with a bit more structure.

Fortunately a good friend of mine’s dad was a golf pro.  So when we went out to hit for the first time, putting was also part of the plan.  With two people it’s easy to find a putting game.  We played closest to the pin for one point.  Winner chooses next shot.  First one to 11 wins.  That cost me a drink.  Actually dinner and several margaritas but it’s all for the cause.

But when confronted yesterday with the green by myself I was more at a loss for what to do.  My plan today was to get out of town and visit Snoqualmie Falls.  While I was in town I passed the Pizza/Bowling place and took a left out to Mount Si Golf Course.  After parking I walked into the pro shop with my trusty Ping Pal2 and asked if any of the pro’s had a minute.  I figured these are the folks most likely to know some putting games for around the green.  As luck would have it the golf gods smiled upon me and Brandon Proudfoot said he had a minute.  I said “do you have a putting game that I could play in 10 or 15 minutes?”  Once he figured out what I was up to he came up with this game which I call Proudfoot 3/6/10/20.

Pick a hole on the putting green.  Place tees at 3′, 6′, 10′ and 20′.  Start with the shortest putt and then move further out each time.  For each putt there are three possible scores.  Make the putt, miss the putt but go no further than 3′ past the hole – called a safety, and miss the putt.  For each round of four putts tally your score.  Play 3-4 rounds. 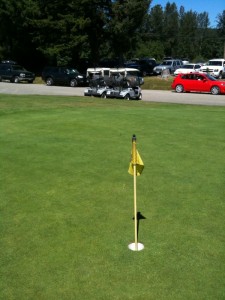 Click on the picture to see the setup of the tees

Here’s the score for each distance

Make the putt – plus 1 point

Miss and safety same as 6′

Miss and safety same as 6′

Brandon said you might end up with negative scores your first time.  He was right in my case.  But after that my scores improved considerably.  He also recommended to play the game where there is a break in the green to make it a bit more challenging.  The best part of the game is how you’ll react to those missed 3′ putts and those made 10′ and 20′ putts.  I’m sure I was the most animated person on the green.  But hey, I was also having the most fun.

By the way, there’s some great articles on TheAPosition.com this week.  Here’s a few of them.

Jim Frank has written an interesting article about The EZ Bag which has an innovative way to make it easier to access your clubs http://jimgolfrank.com/

David Gould has an interesting tip on posture http://davidlgould.com/