As you approach the gate to Chambers Bay you see posters of Arnie, Jack, Tiger Woods and Phil Mickelson holding their trophies from winning the USGA Amateur.  The young faces of these great golfers remind me of Field of Dreams when Ray sees his father on the field for the first time

“It’s my father…My God! I’d only seen him years later when he was worn down by life. Look at him. He’s got his whole life in front of him and I’m not even a glint in his eye. What do I say to him?” -Ray

But the effect is not lost.  These future greats were forged here. 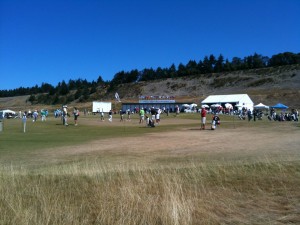 The USGA Amateur at Chambers Bay is a worthy test.  The type of test that commands respect and that creates a true champion.  As I watched a group of 3 players hit their approach shots to the 1st hole, two of them fell 10 yards short of the elevated green only to watch their balls roll back down to 80 yards from the green to be rehit again.  One of them hit the next shot to within 8 feet and saved par.   Some of the greens are the size of small living room with 2 tiers and there is no fringe around the green to stop balls from rolling and rolling and rolling.

Another feature of the course is the dramatic changes in elevation.  As one caddie said ‘I’m glad we get to play The Home Course tomorrow.’  If you’re not used to a vigorous hike with your golf you’re in for a surprise.  It should be interesting to see the effect on players of having to walk around the course so much in order to win the tournament.

Chambers Bay is so incredibly striking with it’s soft tall brown grass, bunkers the size of whales, mounds in the middle of the fairways.  But the strongest element on the canvas is the bay.  It’s not the crashing waves of Pebble Beach or Cypress Point.  It’s the immense majestic bay of the Pacific Northwest.  Quiet.  Still. Significant.  Present.  That part of the course won’t quite show on television but is the critical element in what makes Chambers Bay unforgettable. 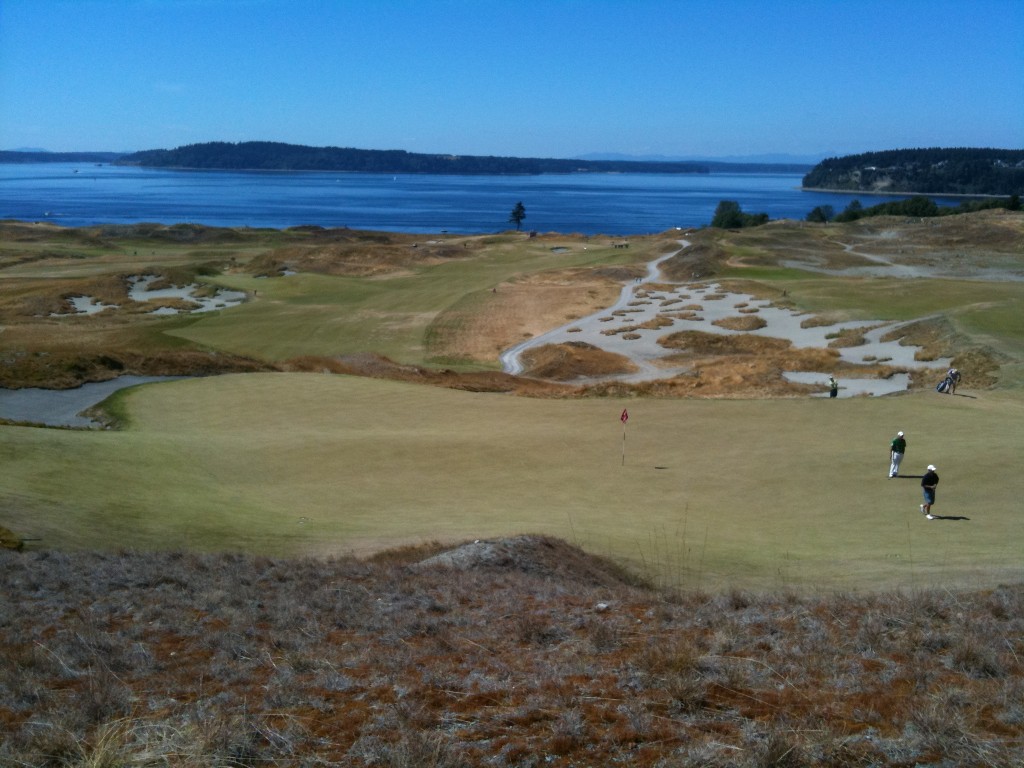 The first two rounds of the tournament are stroke play.  The top 64 golfers with a combined score from a round of golf at Chambers Bay and a round of golf at The Home Course in Dupont, WA move on to match play.  After that it’s golf’s equivalent of March Madness.  There are four rounds of match play, two a day, with the winner moving on until there are only two players left.  The final two players play 36 holes to determine the champion. All played on a grinding, demanding of a course built on top of a gravel pit.

The crowd on the first day consists mostly of the supporters of the golfers.  Following and cheering for them like any high school sports event.  This is not the PGA tour.  It’s accessible.  You can walk with or near the players.  And they’re young.  They haven’t developed the veneer required for the PGA tour.  They show their emotions good or bad like Lucas Glover on the back nine Sunday last week at Wyndham.  They’ll chat with you as they play.  It’s nice.  When someone loses a ball the entire entourage helps look for it.  Mostly out of good sportsmanship and also to avoid a slow play penalty.

The field is a mixture of college players, young men preparing themselves to qualify for the tour, workday professionals with game.  And some of them have earned the right to play as Amateurs in major golf events like The Masters and the US Open.  They can play.  One of the golfers said the average driving distance of his peers is 320-330 yards.   It all lines up to create a great tournament and challenge for the rest of the week.