The atmosphere at any golf major like The Masters, PGA Championship, The British Open and the US Open are very similar.  You know you’re going to be part of something special.  Someone is going to leave a very special mark on the game of golf by climbing a very high mountain.  It is the same at the 2010 US Senior Open at the Sahalee Country Club.  From the moment I stepped out of my car I could tell this is going to be something special.

As I walked along the golf course parking lot you could see from the state of the fairways that the Pacific Northwest is made for golf.  The grass naturally grows thick and green which makes sense given the mix of rain and occasional sun in the Seattle area.  The trees lining the course are tall and lush making a beautiful large contained space for each hole.  So different from some of the wide open spaces I’ve played and it makes for a different game of golf.

As I walked up to the Media Center I was welcome to join a ‘long wedge of the day’ contest put on by the fine folks at Costco.  The goal was to see who could hit a marshmallow the furthest with a pitching wedge.  I performed well but did not place.  But it was a nice way to start off.  Kudos to the Costco folks.  Keep selling those bags of frozen blueberries that I like.  After that it was onto the Media Center which featured rows of tables in front of an interview space and TVs all around the room tuned to various sport events.  Writers working on copy and photographers sorting through their pictorial catches of the day.  Make no mistake about it these are people at work.  And work hard.

The thing is in some ways watching the tournament from the media room is better than on the course.  It’s hard before the cut is made to the field of players at the end play Friday to really keep up with what’s going on by running all over the course.  Also, after the golfers get done speaking publicly they come into the Media room and are interviewed by the writers.

In fact, Bernhard Langer came in while I was there after a great round where he pulled himself into second place for the day at the time.  Almost all of the questions from the writers were really sharp and insightful.  Langer won the Senior British Open last week and the question on everyone’s mind was the effect of jet lag upon his game.  Langer said playing the first round was the equivalent of going out at 9 in the evening and finishing at 2 in the morning.  That was the perspective you wanted to know.

After checking into the Media Center I went out at sat at the first tee.  The first hole is a 408 yard par 4.  So I’m thinking driver following by a wedge.  But then I look down the hole and realize it’s really narrow.  I was immediately reminded of Larry Olmsted’s article of tips to lower your score.  Because hitting driver on the first hole held the risk of a major penalty if you were less straight than a pro dart thrower.  And so that’s what almost all of the pros did.  The pulled out a 3 or 4 wood and hit it completely straight.  That left them a six iron or less to the green as you can see from this Dave Pelz research article. Risk management is clearly such a different way of looking at the game than I’m used to and I heard it several times as I went around the course.

One of the most interesting things about the first tee is that is where the start off introductions take place.  There’s a whole ecosystem of people involved.  And it’s not just the players, the caddies and the standard bearer.  There’s the folks who check the players in and give the score cards out.  There’s the person who makes the introduction of the players.  There’s various folks to bring silence to the crowds when the player tee off.

But two things really stuck out as I looked at this group.  First, the players and caddies are chatting amongst themselves like a tight group.  And that would make sense.  A lot of players have worked as a caddie somewhere in their youth.  So they are all cut from the same cloth.  But when you’re out on the course the only other person on your team is your caddie.  And with the pressure of professional golf it can form a tight bond.

The second thing that caught my eye was that every player and caddie went over and introduced themselves to the standard bearer.  You know, the 16 year old kid carrying around the sign with the players names and scores.  And you see it right there.  Hey kid, you’re one of us.  Welcome.

The other thing I noticed at the tees, at the range, and from the fairways is how much smaller and compact the pro’s swings were that mine.  And how much more they rotate their bodies through in their swings,  It makes them a lot more accurate most of the time and it also shows how much more leverage they get out of their swings.  And their swings are so incredibly smooth.  Effortless.

As I was walking down the hole number 1 I chatted with the wife of a pro who was playing.  She’s was completely stressed and pumped at watching her husband play.  I asked if he had been stressed and she said yes because he doesn’t often get to play in an event like this.  Makes perfect sense and seems pretty natural.

I was also amazed at how quiet it was.  None of the yelling you see on TV in some of the events Tiger plays.  Hundreds of people walking about the area around the first tee and yet barely any noise.

Which brings me to how incredibly well organized and executed this event is.  One of the volunteers said they had 3,000 volunteers working the tournament.  He just applied online.  He also mentioned that some of the volunteers do 4 or 5 events a year at different places depending on the weather.  That’s the way to work it.  But the layout of the facilities for the spectators is excellent and makes the tournament a pleasure to attend.  Kudos to the organizers.  It’s no easy trick. 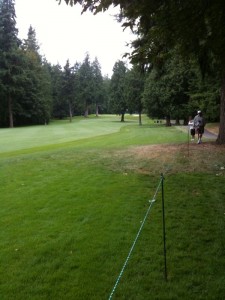 The last chat I had was with a caddie just outside the locker room.  He was carrying the bags of a buddy.  His buddy had selected him because he knew the course so well.  After he slowed down from eating his lunch like someone who hadn’t seen food in a couple weeks, he had some interesting things to say about the course.

He thought the greens were getting a lot harder as the day and the tournament went on.  The ability to stick an iron on an approach shot to the green was going away and shots were rolling to the back of the greens.  He also mentioned that courses in the Pacific Northwest tended to be shorter and narrower than courses in other parts.  Shorter because the dew on the grass tends to stop the drives from rolling very far.  My fellow writer Jeff Wallach explained that the courses are narrower because they are older and the trees have grown in.  The caddie also talked about the trees on 11.  These trees are the talk on the tournament in terms of the course.  There is one right in the fairway.  The caddie said that although awkward it wasn’t that bad except for the two trees on the left side on the green.  The combination of these three trees he thought was unfair because it required two absolutely perfect shots. 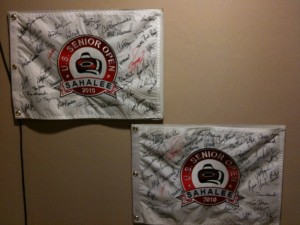 I think the sign of a well organized event is not just the ability of the event management to pull off the bare necessities of the job.  It’s the capacity to also deliver the little, insightful, thoughtful things.  It is these types of things that really show the team is bringing it’s A game.  When I was in the locker room on the bulletin board there were five sets of Sahalee Golf Course flags.  The players had autographed the flags.  There was no sign saying what they were for.  They’re to be auctioned off by charities is what the head of the locker rooms told me.  It was unspoken.  It was through these flags with a simple gesture that the players can say ‘Thank you for all your efforts for us’ to the course and charities at the tournament.  And a massive undertaking it is to put on a golf major.  Well done, Sahalee.

In case you missed my first article about the US Senior Open, you can find it here. And a special thanks to Jim Moore for showing me the ropes.