The FT Optiforce driver is the third driver Callaway Golf has introduced this year – the X Hot and RAZR Fit Extreme being the others. But Luke Willians, senior global director of woods and irons for Callaway Golf, said the company isn’t concerned about confusing consumers. 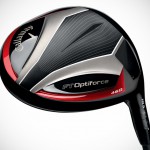 “They each have a reason for being and a particular type of player that they might work best for,” Williams told me. “We want to give golfers choices and options to get the most out of their game so if we have a product that we think will help golfers play better and have more fun doing it we will bring it.”

Here’s a link that helps explain the differences and between the drivers and what type of player each might work best for: http://www.youtube.com/watch?v=US9eqXP6-h4&feature=player_detailpage

“The shapes that we used for the FT Optiforce drivers  are based on a shape we started working on several years ago when we were doing a lot of research on aerodynamics,” Williams said. “We developed a shape that was the best we ever tested and that shape was used to create the 440cc and 460cc. The lighter weight configuration and the loft adjustability were developed independently. Last year after Chip (Callaway President Brewer) got here we pulled these concepts together to create one really exciting product.”

Optimizing the aerodynamics of the FT Optiforce, Williams said, probably was the most difficult technology to develop.

“Designing shapes to be aerodynamically efficient and then being able to test them and detect differences and iterate based on what you learn is very labor intensive and time consuming,” Williams said. “It doesn’t seem as difficult now because we’ve been working with Forged Composite crowns for years now, but when we developed that material that was a significant effort. The loft adjustable hosel was also a challenge, but we had some experience here as well.”

Callaway says that based on its shape and construction, the FT Optiforce is the aerodynamically efficient driver Callaway has ever brought to market. The FT Optiforce, Willians said, has been measured with 23 percent less drag than a conventionally shaped driver.

“Tour players have noticed this. In our first week out last week we had six in play on the PGA Tour where it became our No. 1 model in play and we had eight in play on the European Tour.”