When it comes to new equipment, drivers generally get a lot of attention – and a lot of ink.  There’s good reason for this.  The ability to hit long, straight tee shots makes shooting good scores a lot easier to achieve.  And everyone wants to hit the ball longer off the tee, if only for bragging rights.  But not every new driver is a big advancement over the previous year’s model.  Manufacturers create new models each year because that’s what they do.  Some represent small steps; others constitute giant leaps.  The TaylorMade R11S is a little of both.

When TaylorMade debuted the R11 last year, club testers gushed.  Whether you were a 20-handicapper or a tour pro, chances are you found a lot to like in that club.  This year, TaylorMade has taken that base R11 a step farther with the R11S.  And what may look like subtle tweaks are actually quite meaningful enhancements.

When you pick up the R11S, the first thing you notice is that it feels light.  For a club with a 460cc head (up from the R11’s 440cc’s), it feels like a weapon that any level player could wield – this despite the fact that it’s spec’d as a D4 swingweight club.  The Aldila RIP Phenom 60-gram shaft that comes standard in the R11S (X, S, R and M flexes) encourages faster swings and more clubhead speed.  The head itself feels light, too, thanks to the way it’s constructed with thicker (.06mm) and thinner (.04mm) sections in the crown.  This variable thickness also allows TaylorMade to give the R11S a lower center of gravity, which as everyone knows helps promote a higher ball flight and optimally, a lower spin rate.  Translation: more distance.The R11S is a good-looking club, too.  Even if you’re a traditionalist who is put off by the white paint scheme, I’m betting you’ll get over it pretty quickly when you see what this club can do.  The head has a traditional looking shape, and the size of the head (which looks larger than 460cc’s due to its whiteness), certainly inspires confidence.  The sound of this club hitting the ball is not as pleasing to the ear as persimmon used to be.  It can take some getting used to.  But if that’s the only potential negative (and it is), it shouldn’t get in the way of your trying one out.

I first tested the 9-degree R11S just as it came out of the box – no tinkering with any of its many adjustability features.  After three swings, I doubted that I would ever want to monkey with them – or ever use another driver for as long as I lived.  The R11S absolutely pummels the ball.  When you strike this club well – and even when you don’t – it delivers a long, high shot that seems to bore through the air like it’s being propelled downwind by Aeolus himself.  The ball literally leaps off the clubface; before you can look up to see where it’s going, it’s halfway there.  What gives the R11S such world-beating performance?  A lot of things. 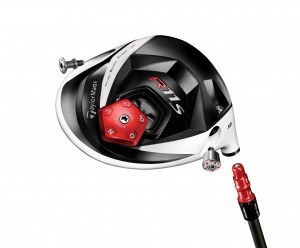 The R11S is one of the most adjustable clubs on the market.

Everyone’s golf swing is different.  Achieving the ideal launch conditions for your swing is something that’s highly desirable but also tricky.  TaylorMade knows that very few players are going to fix their launch conditions by fixing their swings, so they’ve made the R11S the most tunable driver ever to hit the market.  The R11S you put in your bag is really 80 different R11S’s.  Like last year’s R11, the R11S has an adjustable sole plate that lets you tweak the club’s face angle.  This year’s R11S offer five settings – two more than last year’s.  So you can adjust the face plus-or-minus 3 degrees by choosing from Neutral, Slightly Open, Open, Slightly Closed, and Closed.  Then there’s the adjustable sleeve that connects the shaft to the club head.  It allows you to easily adjust the loft of the clubface plus-or-minus 1.5 degrees.  So your 9-degree R11S can be set anywhere from 7.5 to 10.5 degrees.  Via the movable 10-gram and 1-gram weights in the heel and toe, you can also adjust the club’s center of gravity toward the heel or toe, thus encouraging a fade or draw.

The beauty of all this adjustability, of course, is that you can set up the club to provide the optimum launch angle, flight path, and spin rate for your swing, the result of which is the kind of distance and consistency that you only dream of.  A note of caution, though – to really dial in this club so that it delivers the kind of performance it’s capable of delivering, you really need to get fitted when you buy one, and test it out on a launch monitor – ideally with a few different shaft types.  You want to see what effect changing each aspect of the club’s setup has on your launch angle, spin rate and ball speed.

Or you could just do what I did, and take the club to Scotland.

If you’re making the trip of a lifetime to Scotland, I don’t recommend you take a driver you’ve only hit a few dozen times on the range.  But it only took a few swings for me to know that the R11S was the club I wanted in my bag when I took on some of the great links courses of southwestern Scotland on a recent trip.  I was looking forward to seeing how it performed under links golf conditions, and also to experimenting with its setup as I went along.  It wouldn’t be scientific, but I expected it would be informative.

The results were much as I expected.  Playing at Machrihanish Golf Club on the beautiful Kintyre Peninsula, I played with the R11S in unadjusted form:  neutral sole plate, 9 degrees loft, 10-gram weight in the heel to promote a fade.  It performed beautifully.  The next day at Machrihanish Dunes was windier, so I clicked the sleeve to its “Lower” setting and adjusted the sole plate to “Closed.”  With the lower ball flight that gave me, I was able to hit lower, running draws that scampered beautifully down the rolling links fairways.

The next day I played at Turnberry in 40-plus mile-an-hour winds and sideways rain.  With those same settings, I hit one (downwind) drive over 400 yards; coming back the other way, though, I was able to keep the ball under the wind and knock one almost 200 – something that I don’t believe would at all have been possible with a higher lofted driver.  At Western Gailes, when our group started in on the long stretch along the water between the 5th and 12th holes, I loved the way the R11S that I had set up this way let me hit low, running draws.  Later in the week, when our group had finished with the links golf portion of our trip and transitioned over to playing parkland courses, I adjusted the club back to its neutral, 9-degree setup.

Summing Up: Try One

You may not need a driver this adjustable so that you can tune it for different conditions.  But it’s the R11S’s ability to adjust in a snap that makes it the world-beater that it is.  Of course, there’s more to total performance than just adjustability.  The explosiveness you feel when you hit this club is also a result of the “inverted cone technology” that TaylorMade builds into the clubhead.  This technology comes in particularly handy on off-center hits, as does the R11S’s increase in clubhead size.  Mishit shots with this club, and I’ve had my share, go a lot farther and straighter than they have any right to.

At the end of the day, though, there’s no doubt that what sets the R11S apart is the myriad of setup choices it gives you.  Spend some time setting it up right for your swing, and I honestly think you’ll find it to be the best driver you’ve ever used.