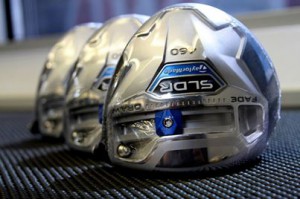 Tom Olsavsky says he understands consumers’ curiosity about TaylorMade-adidas Golf’s decision to introduce a third driver – SLDR – this year, but TMaG’s senior director of product creation added that when a product is better, it doesn’t matter the timing.

TMaG has received some consumer backlash for introducing SLDR on the heels of the 2013 introductions of R1 (and R1 Black) and Rocketballz Stage 2 drivers.

“What we say to people who might have bought an R1 or an RBZ Stage 2 is that we have better technology,” in the SLDR driver, Olsavsky said. “We understand that when you bought (an R1 or RBZ Stage 2) it was the best thing you could buy. But now we have a technology that’s better. For us, it’s no different than what you see in electronics or computers or TVs.”

What’s better about SLDR, which began shipping earlier this month, Olsavsky said, is the driver’s low and forward center of gravity location due in part to the 20-gram sliding weight in the sole that promotes as much as 20 extra yards in distance.

“What we’ve learned over the years is that front-low center of gravity is really the Holy Grail in terms of better launch conditions,” Olsavsky said. “That’s one of the things we can improve upon given the USGA rules. Getting that front and low CG, we can raise and lower the spin.

“It’s definitely longer than R1 and RBZ Stage 2 and the longer than anything we’ve seen in the marketplace. The consumer wants more distance. We’re going to give them more distance with SLDR and they’ve been very happy with it so far.”