TaylorMade’s new SLDR driver picked up it first victory this past weekend and it was a big one. Henrik Stenson played the SLDR to win the Tour Championship and the FedExCup at East Lake in Atlanta.

Prior to the start of the tournament, Stenson switched to a 10.5-degree SLDR driver after damaging his R1 at Conway Farms. TaylorMade’s Tour reps added 1.5 degrees of loft to the SLDR compared to Stenson’s R1 driver, which the company said  knocked off 400 RPM of spin and averaged 10 yards longer on the launch monitor. 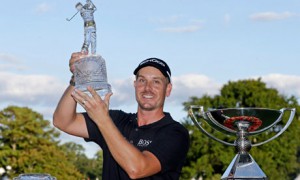