If you’re looking for a good golf course snack that’s not a candy bar or bag of chips, try KNGMADE Jerky. It’s the best jerky I’ve even eaten – tasty and easy to pick apart.

KINGMADE also has a golf background, thanks to professional caddie Jeff King, who created the product and owns the company. King has seeded the jerky with great success on the PGA Tour and LPGA Tour.

King, a caddie for the past 16 years, spent weeks tinkering with recipes and cooking methods before he found what he liked.

“I always enjoyed eating beef jerky but the stuff I found in convenience stores and gas stations was terrible,” King said.  “I knew there had to be a way to make a premium grade jerky and satisfy the health-conscious tastes of the players out on tour.”

So much so that King was making more than 170 pounds per week to meet the demand. According to King, more than 100 tour players, including Tiger Woods, Dustin Johnson and Rickie Fowler, make it a snaking staple.

KINGMADE Jerky (www.kingmadejerky.com) comes in three flavors:  Sweet Chili Pepper, Classic and Buffalo Style.  The jerky sells for $8.00 for 2.25 ounces, and also is available in one pound bags

King said he uses 100 percent flank steak with spices to create his jerky, which has five times less sodium and sugar than any of its competitors and does not add any MSG or nitrites.

King, by the way, no longer makes the jerky in his kitchen.  Instead, he sought the expertise of C&C Processing. A well-established, family-owned meat processing plant, C&C worked with King to produce the exact same high quality jerky that came out of King’s kitchen.

Give it a try next time you need a snack. 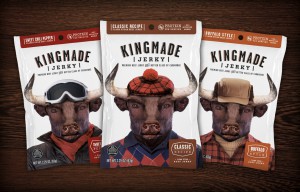