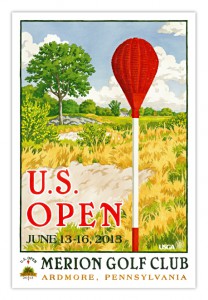 Justin Rose has autographed 100 posters of his 2013 U.S. Open victory

Justin Rose won his captured his first major championship – the U.S. Open at famed Merion Golf Club – this past June – with a four-round score of 281.

To commemorate the achievement while lending support to his namesake charity, Rose has autographed 100 copies of this year’s official U.S. Open poster. They are now available for $281 each (plus shipping). The poster was created by artist Lee Wybranski, who has also signed it.

A significant portion of the proceeds from each sale will be donated to The Kate and Justin Rose Foundation, founded by Rose and his wife. Their foundation is dedicated to improving the lives of children in the Orlando, Fla., area by providing nutritional support, funding education, and providing positive “first exposure” experiences.

The poster is available through the artist’s website, www.leewybranski.com.

Wybranski’s Merion poster is his sixth consecutive commission for the U.S. Open Championship. In 2013, he also was responsible for the official posters for the Open Championship at Muirfield in Scotland and the PGA Championship at Oak Hill Country Club in Rochester, New York. These pieces also are available from his website, as are originals paintings and unique abstracts based on iconic and architecturally significant golf holes from past major championships.

For 2014, Wybranski will be painting the poster for the 2014 U.S. Open at Pinehurst as well as the British Open and the PGA Championship.