I’ve never been a big fan of range finders. That’s nothing against the companies that make them, I’m still old-school enough to trust my eyes and experience to judge distances on the golf course. 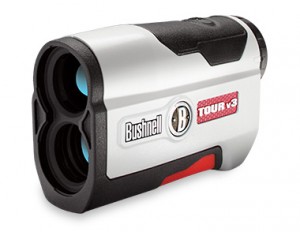 Bushnell’s Tour V3 Jolt range finder – a sportier, updated version of the popular V2 model – hasn’t entirely changed my mind, but it’s the best I’ve found. I’m even beginning to use it more frequently to judge distances to the flag, bunkers and hazard. It’s light weight, well-constructed and is as simple to use as point and click. In other words, there’s not much of a learning curve that’s associated with other range finders.

The Tour V3’s Jolt’s Pinseeker technology gives a jolt – more like a vibration – to let you know you’re on target. And the ‘jolt’’ makes it easier to know when you’ve found the target. Bushnell says it’s accurate within one yard of the pin and I can’t argue with that claim.

The Tour V3 Jolt’s range is around 300 yards – more than enough – but its best use, of course, is for shots within 150 yards. If you’re playing an unfamiliar course, or in an unfamiliar spot on your home course, the Tour V3 Jolt, which sells for around $300, is a good companion.