In the early 1990s, the Ben Hogan Company was one of golf industry’s top equipment company in the irons market place. The company’s Edge and Apex forged irons were among the top iron lines in the game. But the company – like many others – hit tough times in the late ‘90s, was sold a couple of times, including to Callaway Golf Co., and fell off the radar. 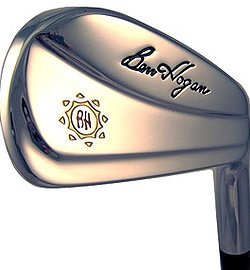 Now, Oscar Feldenkreis, president of Perry Ellis International and Terry Koehler, president of Eidolon Brands, LLC have announced the Ben Hogan Company will return to the business of club-making in 2015.  This re-introduction of Ben Hogan golf clubs coincides with the 60th anniversary of the introduction of the first Ben Hogan irons in the fall 1954. Ben Hogan founded the company in 1953 in Fort Worth, Texas.

“Since our purchase of the Ben Hogan brands in 2012, we have been contacted by many parties inquiring about the return of this revered brand to the equipment business,’’ Feldemkreis said.  “After much deliberation, we are excited to have Eidolon Brands reintroduce the Ben Hogan brand back into the golf equipment sector.”

“Respecting the history and the legacy that Ben Hogan built with the golfing public, we were determined to find just the right group to drive that effort.  As we became more acquainted with Terry Koehler and Eidolon Brands, it became clear that this company exhibits the values, spirit and passion that Ben Hogan always represented to the golf community.’’

Koehler, President/CEO of Eidolon Brands, is a former director of marketing of the Ben Hogan Company.

Koehler said creating the ‘new’ Ben Hogan Company represents an opportunity to honor the legacy of two of his heroes – his father and Ben Hogan.

“My golf life began with an introduction to Mr. Hogan’s values and principles from my father,” Koehler said. “He played with Mr. Hogan before the war and considered him a true hero, so I did, too.  I grew up with ‘Power Golf’ and ‘Five Lessons’ as my golf textbooks, and always played Hogan irons from my very first cut-down 5- and 9-iron.  To be in a position to assemble and lead a team of equally committed Hogan disciples is an honor I could not even have imagined.”

According to Koehler, an R&D team has already been working on the new Ben Hogan club designs, and the first offerings are targeted for introduction in 2015.

“We are studying all the things Mr. Hogan believed about golf clubs, and dissecting early Ben Hogan designs to understand his performance principles and knowledge of what a golf club should do,” Koehler said. “There was a wealth of genius in those early clubs.  Our commitment to the Ben Hogan legacy is to ensure that every product delivers unmatched precision and dedication to the art of shot-making, providing equipment that allows golfers of all abilities the opportunity to optimize their skills.”